From August 1 – 10th this year the World Police and Fire Games took place across 41 locations in Northern Ireland.  The WPFG is the 3rd largest multi-sport event in the world.  And I was excited and proud to be a part of it.

My role as a volunteer almost didn’t happen for many reasons, but I’m so glad it did!  There were 7,000 athletes from around the world participating, and 3,500 volunteers.  It was the largest event ever in Northern Ireland! The fun began in June with the orientation training where we were inspired and had some fun listening to some great Northern Irish personalities: Dame Mary Peters, an Olympic athlete, and Common Games medals winner in the pentathlon and shot put.  Tim McGarry, an actor, writer, and comedian.  And David Meade, a mind reader.  It was the middle of the afternoon, but it was like being out for an evening of entertainment.  I was on my own in a room of 3,000 but I really enjoyed it. 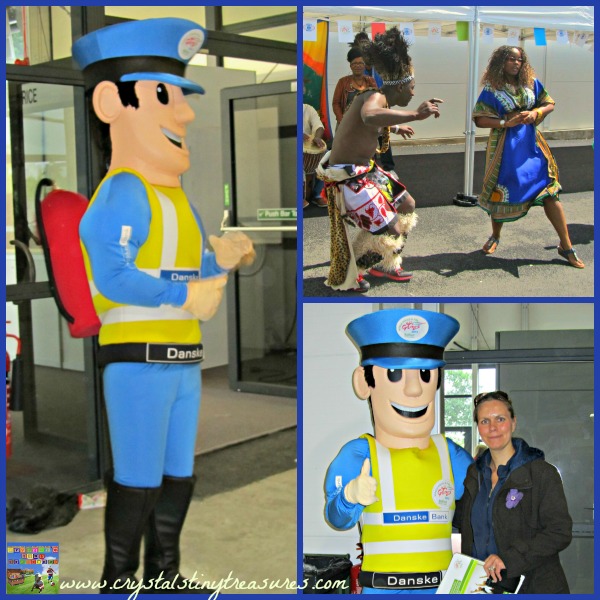 I received my email confirming my team of Field of Play/Sports Admin, and later when I discovered I would be working with the dragonboats, I was so excited!  I competed in the non-competitive races in the Regina Dragonboat Festival for 5 years before I left Canada.  It was something I looked forward to every September.  I was part of the University of Regina Motley Crew.  We were from all areas of the university, and we weren’t necessarily sporty, but we certainly had a great time together!  I still keep in touch with a few of the ‘ole Crew members. The dragonboating races went over three days, but Phil was working the Friday so I wasn’t able to volunteer.  However, I took the opportunity to take the children into Belfast on the train to watch it with them.  We all cheered for the Canadian women’s team, who came in 2nd overall. Every event in the WPFG 2013 was free, which was fantastic for us, as sports events are usually out of our price range.  So after the dragonboating was done for the day we walked over to see some ice hockey.  Tristan loved watching hockey when we were last in Regina, so I knew he would enjoy it.  We watched 2.5 games, with Phil joining us after work.  We didn’t get the kids into bed until 10pm but they had a great time. 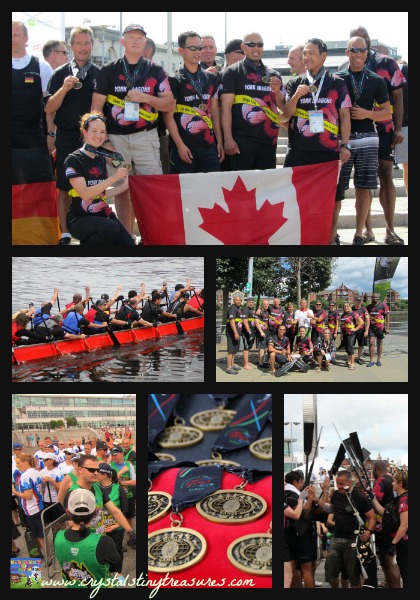 The next two days saw me as a boat marshaller, checking names and codes off of the athlete’s accreditation passes to the team rosters.  It was a lot of fun being in the middle of the teams, and then I was able to watch and cheer them on during the races as well!  I made some good friends here; both from Northern Ireland and further away.  After the final race on Sunday the volunteers, medical team, security, etc. were offered the chance to go out on a boat and give paddling a try!  I was so excited about getting back on the water that I sent Phil a message and he came into the city to watch with the kids.  Other than Fai, our steersman from Hong Kong (he was the steersman for any teams who needed one, and he also went on to win a gold in the open-water swim two days later),  I was the only one who had been in a dragonboat before.  It was amazing to be back in a dragonboat again!  I may not be great, but I LOVE it! 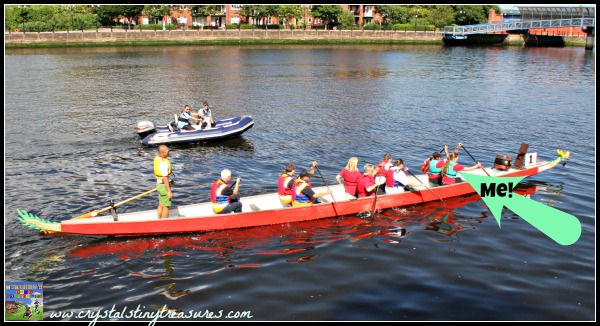 We can’t often afford to go into Belfast, but we found a way and Tristan and Kallista and I took the train in another three days to watch more ice hockey, charity dodge ball, and the Ultimate Fireman team event.  They were all great to see, and I wish we could have seen more! 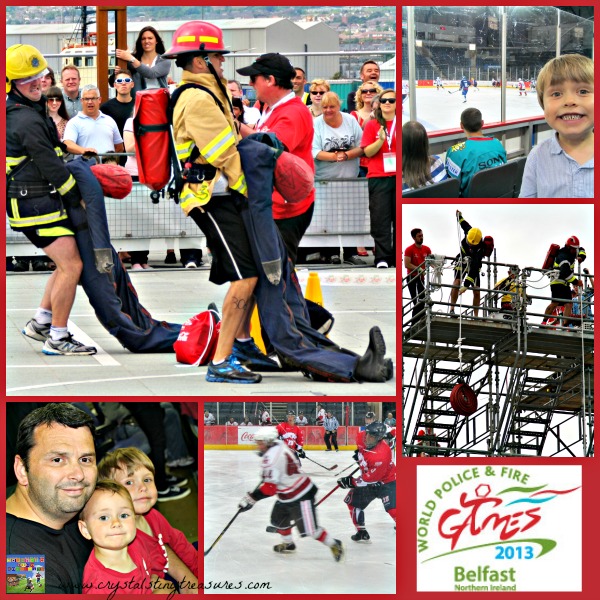 August 10, and The World Police and Fire Games Closing Ceremonies were already upon us!  It was another trip to Belfast for us, and Phil picked up the children after work and I wandered around a little, visited the Belfast Barge, and met up with my co-dragonboat volunteers and new friends.  We caught up on the week before catching a shuttle bus to the Titanic Slipway for the closing ceremony.  We ended up being in the right place at the right time and found ourselves in the flag procession for the ceremony!   I requested a swap with the girl who had the Canadian flag, but she had been asking for it all week, and was having such fun, that was fine.  I was happy to carry the flag of Trinidad and Tobago.  The Red Arrows did a fly-past over the new Titanic Centre, and there were lots of speeches in addition to the handing over of the torch to Fairfax, the 2015 location of the WPFG.  The games will be in Montréal in 2017 and I think we’ll have to start saving so we can go volunteer, and visit my sister and nephew who are living there. 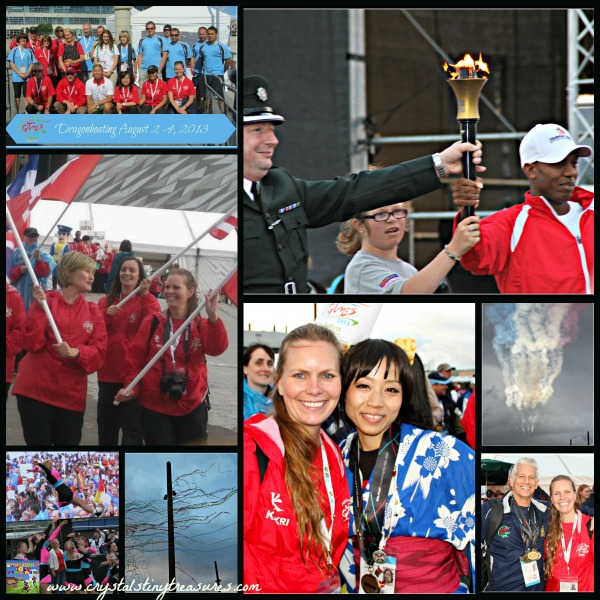 The WPFG were such an amazing experience for the whole family, and I was proud to be just a small part of it.  The atmosphere was buzzing with athlete and folks from around the world.  In the dragonboat area, team were hugging and cheering each other on before the final races, and there were a few teams who ‘borrowed’ members from another country’s team if they were short on numbers in the boats.  I really enjoyed seeing such camaraderie!  Everyone was so relaxed; I had to remind myself that these were men and women who risked themselves to keep us civilians safe.  They were much more like university athletes out having fun with friends! After the formal part of the closing ceremony we wandered around one last time and found a few familiar faces from the dragonboats before taking the shuttle bus back into Belfast for a quick stop at the Athlete’s Village before our time together on this journey came to an end and we caught our trains and buses home. 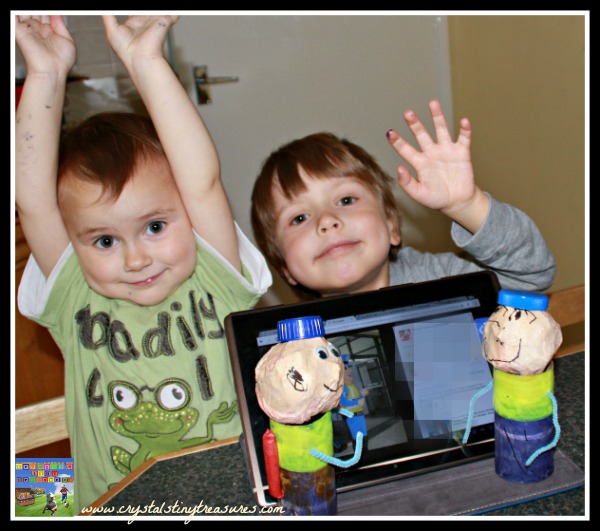 To have a little extra fun with the children for the World Police and Fire Games, they also each made their own ‘Emergency Eddy’ that I had met at the orientation training.  These were made in a similar manner to the RCMP we made last year.  I think they turned out not too bad!  Or see our Multicultural Activities for Kids page where you’ll find all of our multicultural ideas in one place.

Do you or your children volunteer?  What would be the perfect role for you?