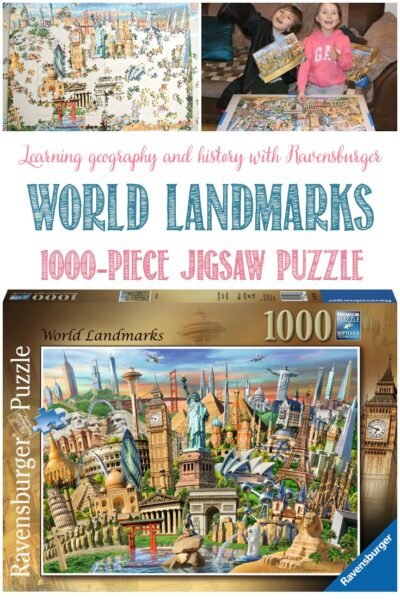 We love to be armchair travellers and learn about the world at home.  Combine history, culture, and architecture, and we’re happy campers!  When Ravensburger asked if we would like to piece together their 50 World Landmarks puzzle we were very keen to get started. 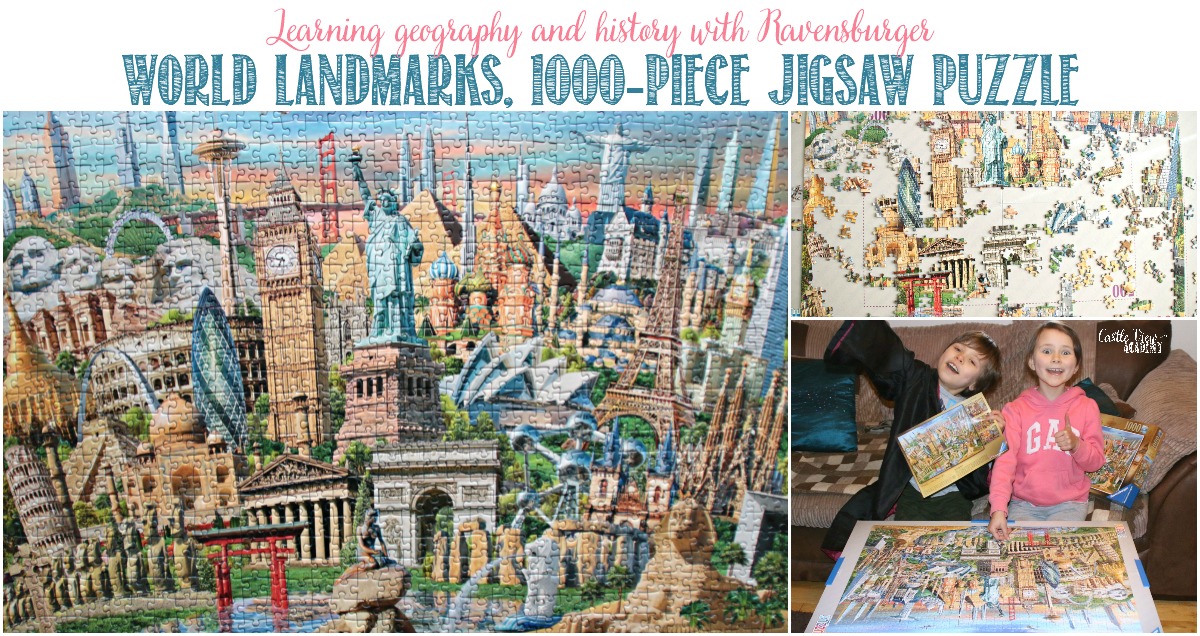 This was one of my favourite puzzles to put together!  It was completed in less than three days as I couldn’t pull myself away from it.

The children helped sort the frame from the centre pieces and put it together which went quickly as we were waiting for our lunch to cook.  Then I sorted some of the pieces while they fit a few together.  I began by pulling out all of the sky pieces.  This is an area that is often left until last, but with the sunset streaking across the background, it was like some calm and peace in the chaos of the rest of the jumbled scene. 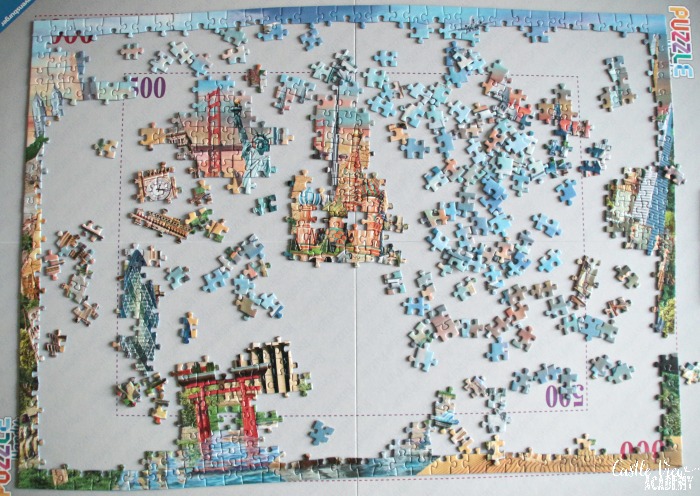 As I was putting aside the sky, some of the other pieces stood out with their colours and patterns and were easily put together; the Gherkin in London and a Torii Gate in Japan’s Hiroshima were the first to be completed.

Tristan was concentrating on the Golden Gate Bridge while Kallista was drawn to the Queen Elizabeth Tower that houses Big Ben.  She’s had a fascination with this tower since I went to London a few years ago and had to promise to bring back a photo of the tower; it was pouring rain and a dark January night, but I managed, just for  her. 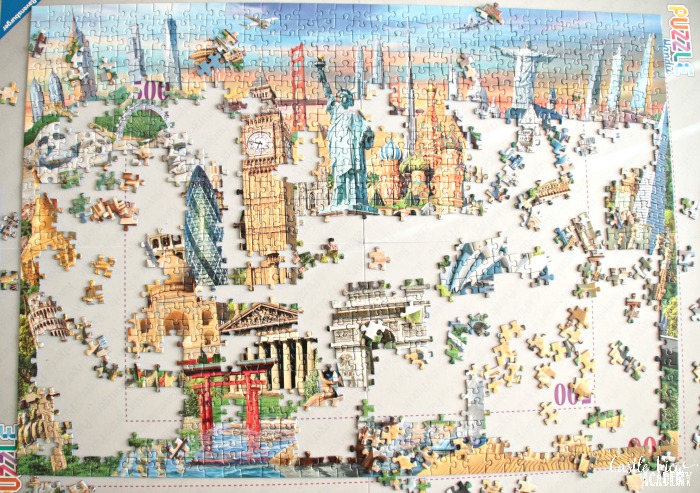 Of course, with the forming of the sunset, the planes and skyscrapers rising up above the horizon were also completed.  The Statue of Liberty and Moscow’s St. Basil’s Cathedral with their bright and bold colours were calling out next to be constructed.

Then…things became a little more challenging as the main big structures were completed.  Many of the remaining constructs were made from sand, rock, and bricks.  Of course, the Sydney Opera House and the Eiffel Tower are more modern and made of steel and the white of the Opera House does stand out, but these two were actually some of the last parts to be completed, along with the Colosseum and the Sphinx. 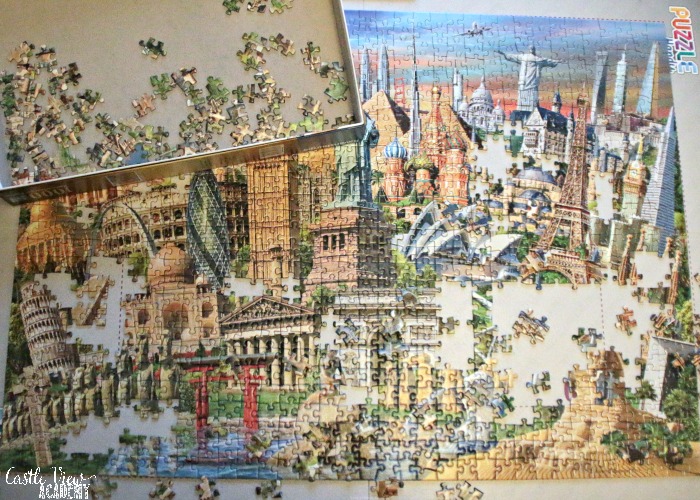 If you’re not sure about all of these 50 world landmarks, there is a lists of them included on the back of the handy sheet that was included that has the completed picture on one side.  I love when these sheets are included; they make putting a puzzle together much easier as you don’t have to attempt to lift the box lid up and then crick your neck to try to see the picture while not tipping over the lid or mixing up the sorted pieces into a mess. 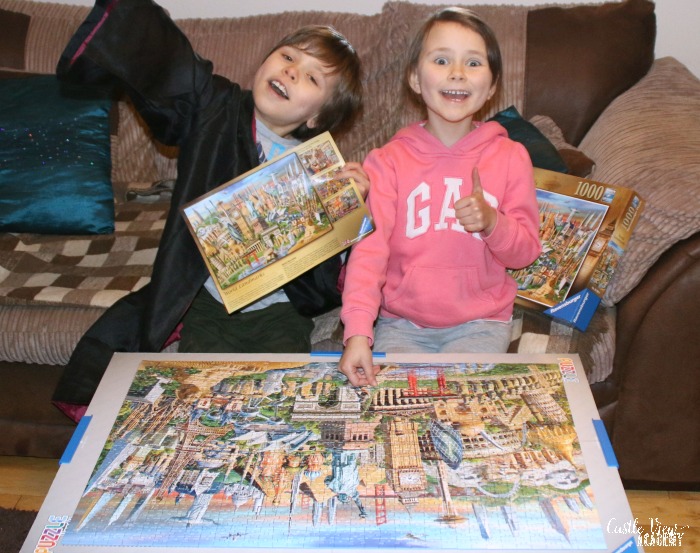 Anyway…this paper lists the landmarks, starting from the top left and gives the name of the landmark and where it is in the world.  I have seen 17 of these landmarks in person, and Phil, many others.  This makes for some fun stories to tell the children about our travels and life in other countries.

You can easily turn this into a fun geography lesson for children by having them find each of these locations on a map and learning more about them.  A great number of these are in a book the children use on a regular basis that gives some of the technical information about world landmarks. 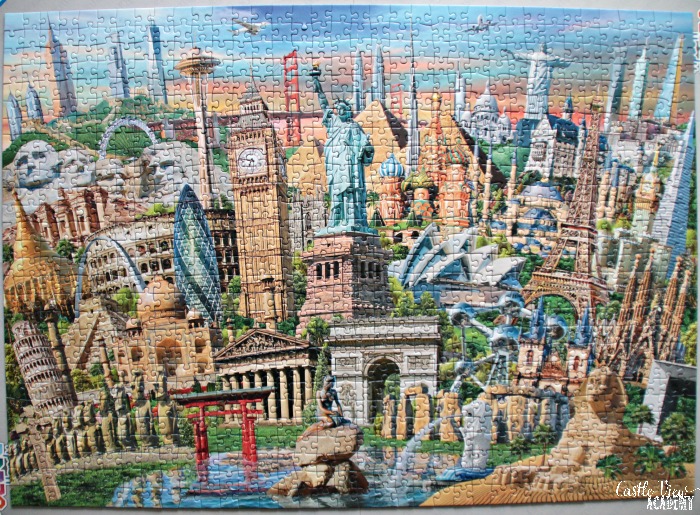 World Landmarks is a puzzle that we will be bringing out again many times as the children grow and learn more about the world.  It makes me want to bring out my photo albums and show the children photos from my travels!  I really must get one of those little gizmos to scan negatives so that my photos are easy to access.

How many world landmarks have you seen in person?  Which was your favourite?  Let me know in the comments!

The Ravensburger Puzzle Handy is also available from Amazon.co.uk and retail outlets.

If you enjoy a good puzzle, check out these other Ravensburger 1000-piece puzzles we’ve reviewed: