Last month we received the opportunity to review Whistlefritz Spanish Lessons For Kids.  When I mentioned it to my husband, he nearly flew off the sofa in his enthusiasm!  I think that was the quickest email reply I’ve ever done.  We decided to keep it a surprise for the children until it arrived. 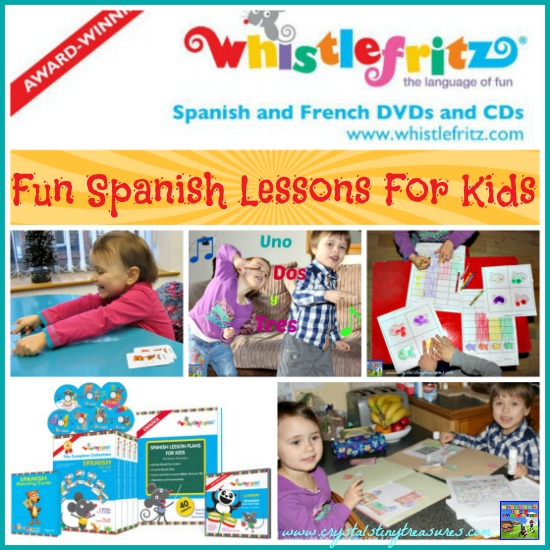 We received the Educator’s Collection in Spanish (They also have French) in exchange for our honest opinions, no other compensation was involved.

The children were so surprised to receive this big package in the post!  The packaging had received some damage in transit, but everything included was in perfect condition: 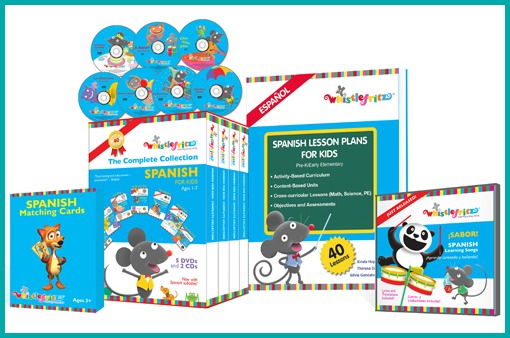 The children didn’t want to wait until I’d read through the lesson plan book, so they settled themselves in to have a preview of the DVDs.  The were captivated and wanted to watch all 5 in one go…Fritzi is the cute little animated mouse that the children will learn with in the DVDs.  Along with Fritzi, is Maria, guiding you through the fun and learning in the videos.  Other multicultural families also join in for the fun.  The DVDs are completely in Spanish.  No ‘translating’ allowed!  That’s the best way to learn.  Repetition over time in different contexts will have the children learning, even if they don’t think that they are.

We’ve all been listening to the 3 CDs both ‘intentionally’ (asking the children if they can recognise the numbers in a song, etc.), as well as general background music while they practice their handwriting, colour, or just go about their daily routines.  This way they can get accustomed to the the sounds and blends of Spanish without realizing it.  You’ll recognise some of the songs such as ‘Bingo’ and ‘Old McDonald,’ but there is a great collection of other songs and musical styles.  Jorge Anaya is a perfect fit for Whistlefritz music!

READ MORE:   Around The World

The matching cards are bright and colourful and were a hit with the children.  They like to play ‘concentration’ with them at the library.  Being so small they are easy to carry in a handbag or even a pocket.  We’ve assigned each card an appropriate gesture or action to go along with each verb.  For example, the children pretend to wash their hands for the card ‘lavarse las monos’.  They each say the phrase and do the gesture for every card that is turned over, regardless of who turned it over.  They’re very supportive of each other and cheer when the other has found a matching pair.  It’s a good thing our librarians don’t mind a little noise now and then!

The Teacher’s book contains 40 Spanish lesson plans, with each lesson predicted to last about 30-40 minutes.  However, this may vary depending upon the number of students in your class and how quickly they pick up the designated vocabulary.

The book is well layed out with the printables following directly after each lesson plan.  There is some prep-work to be done with this curriculum.  But if you use it again in the future, you’ll only have to do it once. 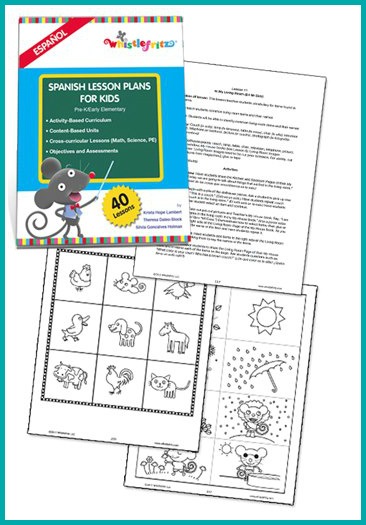 The Spanish lessons revolve around everyday life situations for young children.  Such as learning numbers and colours through with birthday party balloons and gifts.

Most of the supplies that are needed should be very easy to source in North America, and they are things I didn’t think about when I lived in Canada.  But over here in the UK we don’t have everything suggested, so we’ve improvised.  Life is all about being creative with what you have!

There is lots of flexibility within the lessons to do things like this.  It’s not so very strict that you MUST do every lesson in order, though it is recommended.  It is possible to skip around a little and learn things that are relevant to the student’s lives.  If you’re going on a visit to a farm, learning the names of the animals in Spanish would be perfect!  And if it’s summer in your part of the world, have your ice cream party now, instead of waiting until the end of the book.  Flexibility like this is especially nice to have when homeschooling!

Although there are 40 Spanish lessons in this book, it would be very easy to turn it into 80 by splitting the lessons to teach only 1/2 the vocabulary during each lesson, and incorporate a little review into the lessons.  My children were  little frustrated that they couldn’t always remember every item they were meant to learn during the lessons.  It’s probably more difficult for them as I’m not truly able to give them an immersion program as I’m learning also learning Spanish alongside them.  This is where the DVDs come in handy so we can learn the correct pronunciation.  It’s so cute when the kids correct me, and good to know that they are really learning!

There are two improvements I’d love to see in future editions of Whistlefritz Spanish Lessons.  The first is that it would be great if the pages in the teacher’s book were perforated to make it easier to take them out of the book to use.  I used a craft knife, but I didn’t get every page quite even and I sometimes went through more than one page at a time.

The second thing would be a listing on the CD and DVD covers of the track names to make it easier to find the track you need for a particular lesson.  Or on the DVDs an option to run just one segment at a time as well as to show the entire disc at once.  These are just little things that don’t affect the lessons or the fantastic content, but would make life a little more convenient. 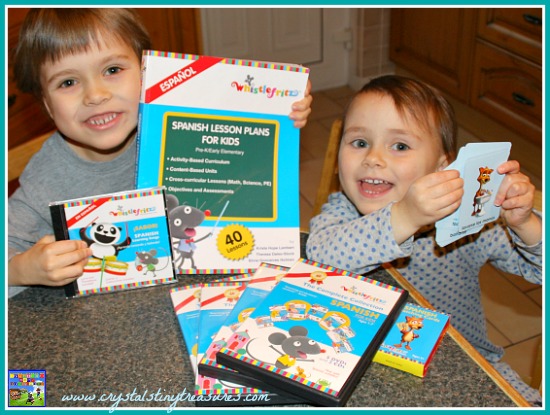 Phil was practicing the colours one evening while the children were watching a lesson, and they like to quiz me randomly throughout the day.  “How many raisins do I have?”  “5?”  “No, Mommy, in Spanish!”

I love the ‘breakthrough’ moments we’ve all had using the Whisltlefritz curriculum!  That moment when a child has really been struggling with the vocabulary, or a particular phrase.  Then the lightbulb clicks on and their face lights up and they ‘get it’!  They’re so excited that the words tumble out and then they WANT to learn more….right NOW!  This happened for Tristan when we were doing our third lesson about things you’ll find in a home.

“Tristan loves learning!” is the message he’d like me to pass on to you about Whistlefritz.