We’re still enjoying time with my parents who have been visiting for the past 4 weeks.  During this time my children have enjoyed a few days out on field trips.  Today I’m happy to have Adriana Zoder from Homeschool Ways guest posting for us about her recent field trip and how it can be applied to life in general.

This spring my family visited Washington, D.C. We took care of some official business at the Romanian Embassy and then we took our kids to the Smithsonian for the first time for them. They were fascinated and learned a lot. So did we. Here are 5 things I learned during this field trip, which can apply to any field trip: 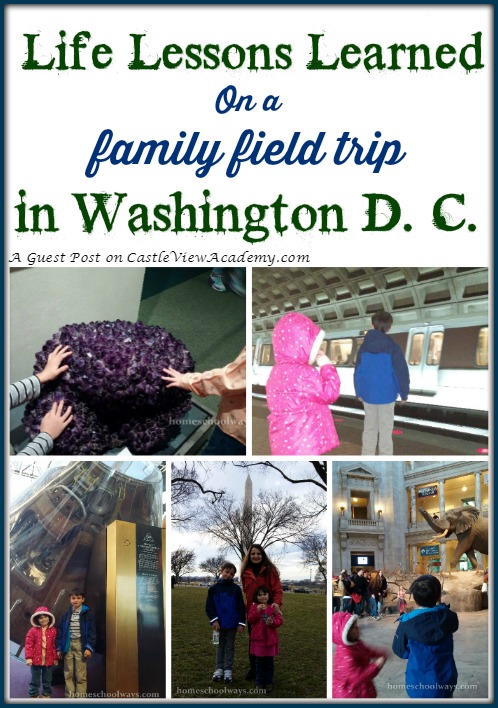 Guess what? The following week, it just so happened that our son took his yearly standardized test. One of the questions was, “Who was our first president?” When he told me that in the car, on the way back home, I felt my blood leaving my feet. I knew we had not covered that.

I had a good laugh about it and learned that no, I cannot teach him EVERYTHING. But, also, that some of the more obvious things should not be overlooked.

This advice applies to anything under the sun, of course.

But on a field trip to Washington, D. C. it is very easy to push yourself beyond your limits because you are there. You spent time, money and effort getting there and by George – no pun intended – you will not sit in a hotel room all day long.

The trouble is, you will be doing a lot of walking – slow walking, that is. And I would rather jog than walk slowly, at the pace of small children. Just walking from the Smithsonian metro station to the entrance of the Aero-Space Museum was enough to dampen my spirits. Then, we did a lot of standing around, looking at exhibits, taking pictures, reading plaques to the kids and generally taking in the sights. Not for the faint of heart.

My advice? Wear comfortable shoes, bring a snack and water in your light backpack, and call it a day after two hours of sightseeing.

Ignore the kids’ pleas for “More time in the museum.” They don’t know their own limitations. You don’t want a meltdown in the Metro, do you?

You can always stay another night or come back another time.

3. Bring a map but trust your instincts more.

When we asked where to go for the nearest Metro station, the hotel staff quickly produced a map. I don’t know what our problem was, but we just could not get our bearings, even with the map in our hands. They make those maps so simple, and yet they represent such a complex architectural design.

We ended up ignoring the map and remembering we took a left from the hotel, then a right, then we passed the statue with the horse, and so on. We both carried smart phones with Google Maps apps, plus the paper map from the hotel.

At the end of the day, it was our own sense of orientation that got us back to the hotel.

By the way, it strikes me as a metaphor for homeschooling. You can read all about how to homeschool in books or blogs, but you will find your way as you trust your own instincts as a parent and educator.

All field trips involve some traveling. Safety should be number one.

For us, driving to Washington D.C. takes eight hours. We made it there without major incidents.

On the way back, everybody was tired. We were one hour away from home when the perfect storm happened. Daddy had to take a major turn off an interstate onto another one and our daughter decided she wanted to stand up on the back seat to do something. I was super tired and our son kept telling us something about one of his models.

Distracted and tired, daddy almost hit another car and, out of fear, tiredness or frustration, everybody let out a scream of some sort or another. You know, like a collective family meltdown.

We talked about it and made sure we all learned a lesson.

But the trip is not over until everybody is tucked into their own beds.

5. Talk to your children about what they are seeing.

Our kids witnessed a lot of big city details for the first time: the homeless, the trash, the Metro, the huge boulevards, the large buildings, the hotel, to name just a few. It was important for us to help them filter what they were seeing.

One of the homeless actually tried to engage our son in conversation and our son looked scared. Daddy told him about the homeless in our country.

Experiencing something is one thing, understanding what it is makes for a different item altogether.

Adriana Zoder, Gatlinburg resident and homeschooling mom of two, is the author of five books available on Amazon.com, including the bilingual series Kitten in the Storm. Adriana also writes for her local newspaper, The Mountain Press. You can connect with her through her blog, www.HomeschoolWays.com.