Home » Education » Field Trips » We’ve Been On A Viking Experience!

This year saw Portadown hosting their second Viking Experience and as we’ve never been and my parents were visiting I thought it might be something interesting for us all to do as no one in our family had been to Portadown previously. 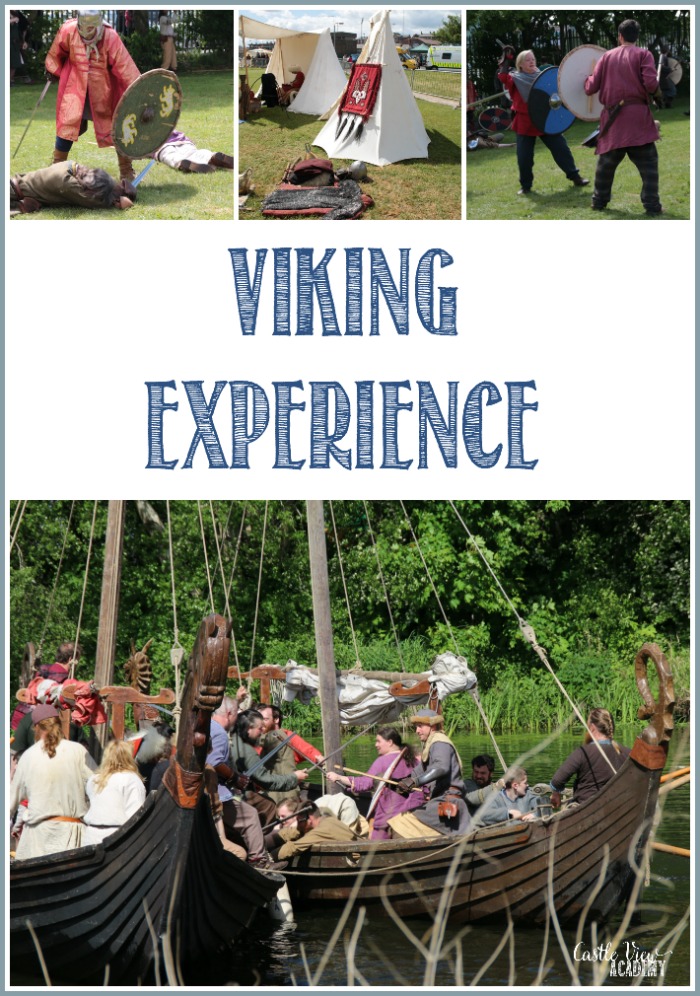 The day was warm and a nice mix of blue skies and fluffy clouds, and as it was a Sunday the cost for an all-day-go-anywhere Sunday rail ticket was only £7, so it was very reasonable to get there.  Everyone else headed out by car, but there wasn’t enough room for all of us to fit so I took the train and met everyone else there. 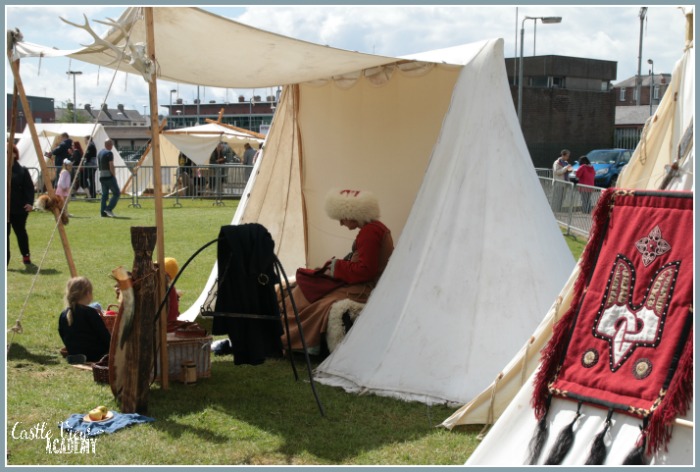 I didn’t know what to expect, but what I was met with was an area near the Bann river that had many canvas tents sets up.  The tents themselves were interesting and beautiful as they were all constructed by hand using wooden poles, guy lines, and black-smithed pegs.  There wasn’t a nail or screw in sight; the furniture that was present was all fit together with wooden pegs.  Awesome!

If there’s one thing that I can appreciate, it is fine craftsmanship.  I know just how much work really goes into the construction of hand-crafted items; from costumes, to battle implements, to the animal shelters and jewellery for sale, it was fascinating. 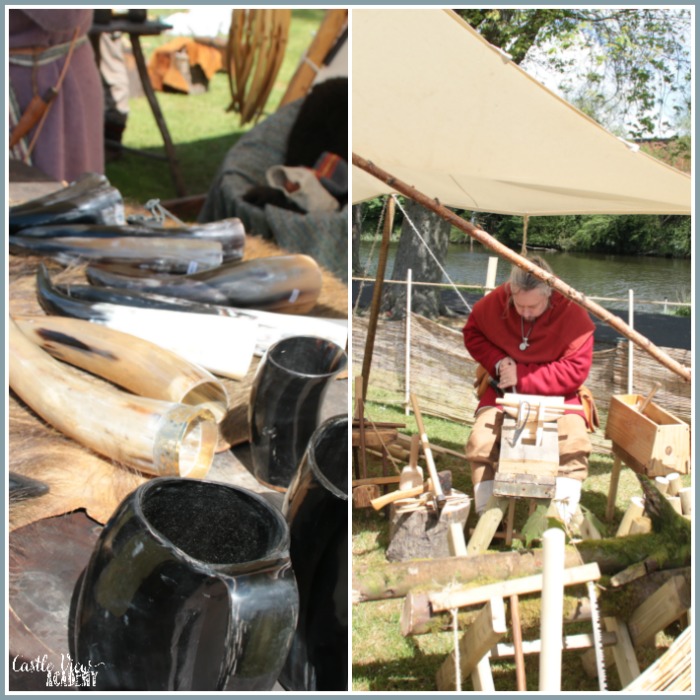 Tristan and I found the tent with food items that the Vikings would have eaten to be interesting as they were the same staples we always have at home in the kitchen; whole wheat pitas, carrots, parsnips, eggs, mushrooms, and dried fruit.  Yes, we could eat like the Vikings!

Kallista was very interested in the craft area where the ladies were showing children how to braid using a unique technique of five looped threads held under their feet and using their fingers a bit like a loom.  She wanted to try it so Phil told her she would have to ask if she could do it.  A couple of months ago, she wouldn’t have done this, but since using the Color My Conversation, she has become more confident in public situations and she asked very clearly and politely.  A woman in Viking dress sat with Kallista and showed her how to move the yard loops over her fingers and keep the rhythm going.  It looked a bit complicated, but of course, with it being the day before she turned 7, Kallista picked it up with ease. 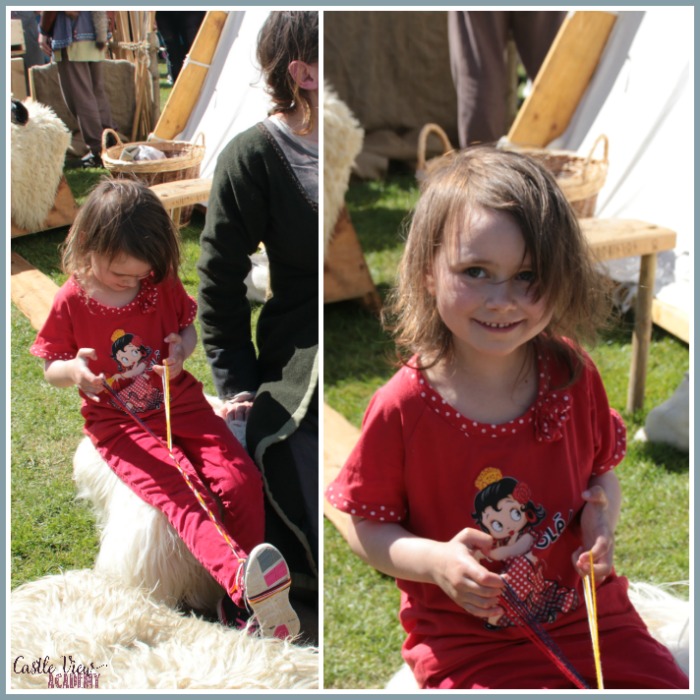 The look of concentration on her face and the smiles as her braid became longer were grand.  It was great to see Kallista succeed so well at this as she’s struggled with braiding in the past.  She was so proud when she had a beautiful braid tied off and that she could take home with her.  Now she will have to show the rest of us how to do this ancient craft.  I’m told that children as young as 3 would have been able to do this and it was how families spent their winters by the fire.  It’s excellent for fine motor coordination!

The Viking Experience rally did make a big effort to include children, which I loved to see.  There were even battles between children aged 4-8 against the professional adult warriors!  How cool is that?

Then there was a battle between two teams of warriors (they are the same people who ran the tents – they were on double, and even triple duty).  There were honourable fights.

Then they all lined up against each other and fought to the end. 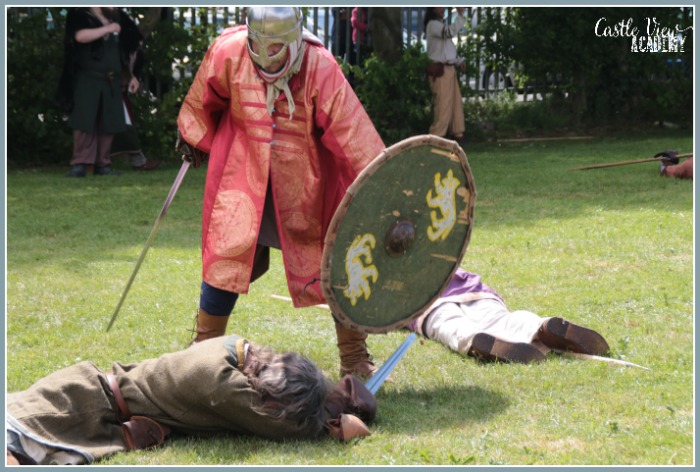 And then there was a free-for-all.

Some of these folk were real characters! 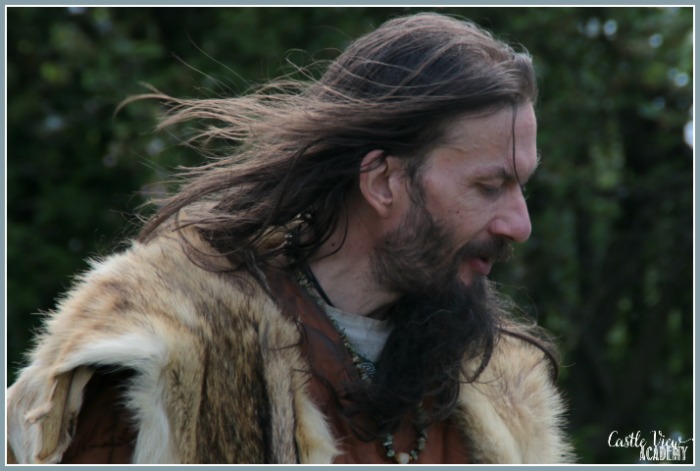 The cost of admission was £3 per adult, and children had free entry.  And the ticket also included a short Viking boat trip along the River Bann.  The children had never been on a boat that they could remember (Tristan was only a few weeks old the last time he was on the water), so they were a little nervous. We all put life jackets on and climbed in; all 6 of us. 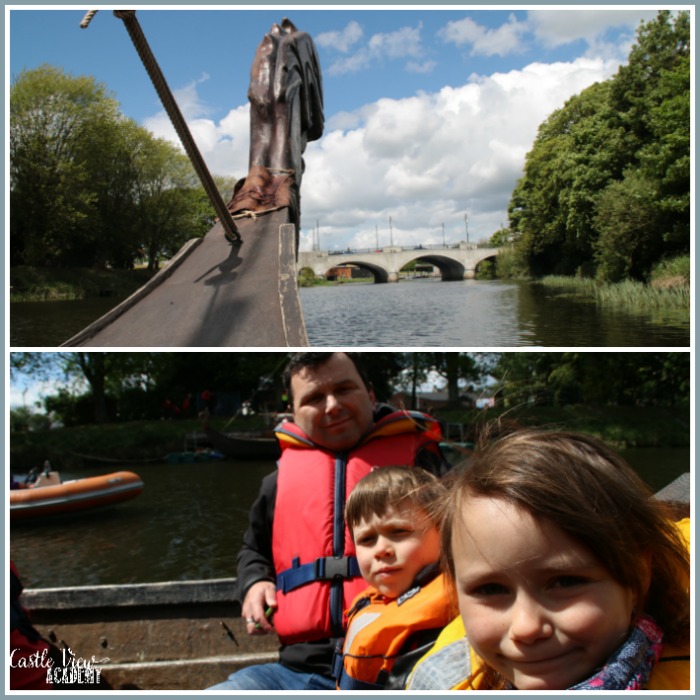 Once we started to move and the kids felt that we were safe they enjoyed themselves and say they are looking forward to another boating experience! 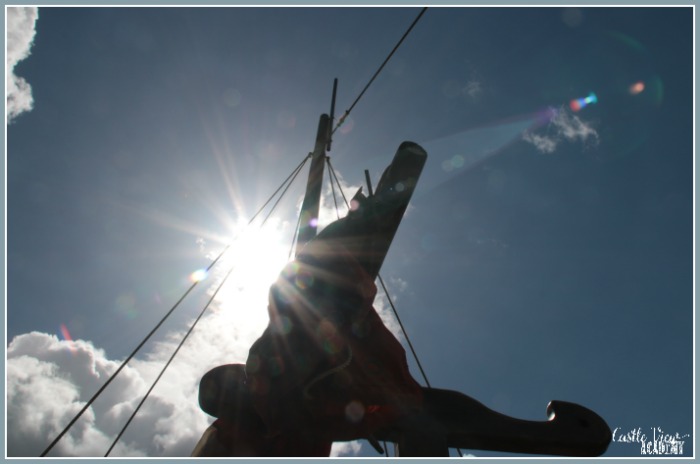 I took the opportunity to try out taking a few photos of the boat on the water, and a little contre-jour as well. 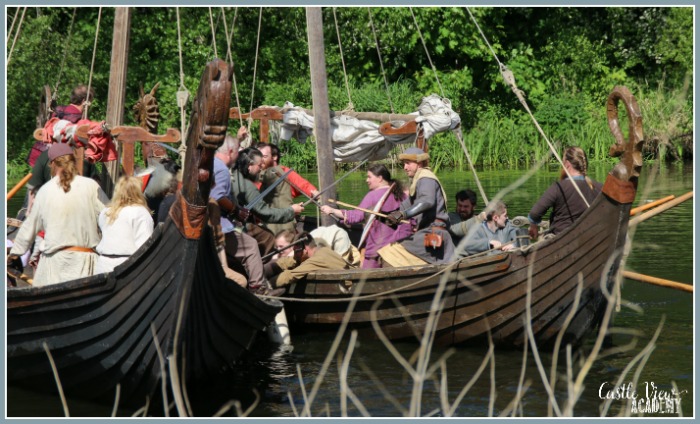 To end off the last day of the Viking Experience, we watched two boats fight each other on the river.  The occupants fought hard as the boats passed each other.  And there were casualties…with a little dramatic flair, a couple of participants fell into the water and met their end (of course, they didn’t really, and the safety boat was there to pick them up out of the water). 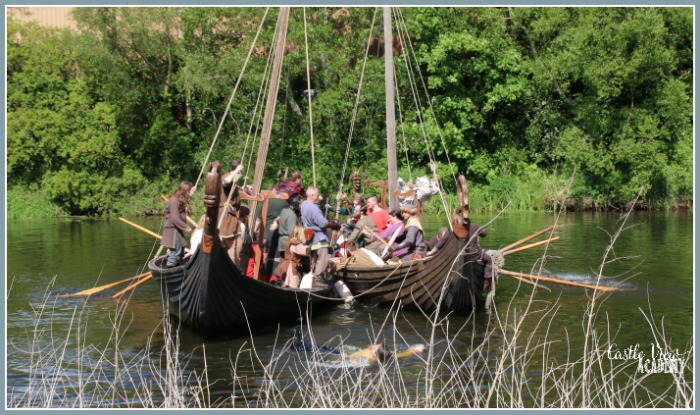 What a fun day out!

Everyone then packed up and headed home by car and I wandered around a couple of shops on my way to the train station.  I was pleasantly surprised that I was able to get a seat on the Enterprise (the express train that runs between Dublin and Belfast).  The seats were more spacious and comfortable, and the ride went quickly past the countryside to Belfast where I had to get off and wait for my connecting train.

Back in my late 20s my coach tour group that went through Scandinavia had a viking fest of our own when we were in Norway, which was fun, but it was really neat to experience this here in Northern Ireland.

Have you been to a viking festival before?  Tell me about it in the comments below! 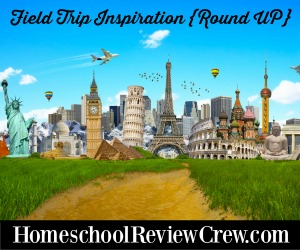 Previous Post: « Boomer At The Bat: A Book About Sportsmanship
Next Post: Don’t Forget These Elephant Books For Kids »