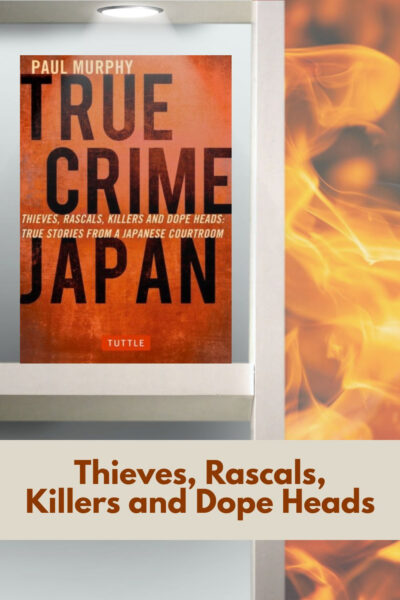 Every now and then it’s nice to turn off and read a book in a different genre that has nothing to do with education or working life. The most recent book that I’ve finished was True Crime Japan: Thieves, Rascals, Killers and Dope Heads: True Stories From a Japanese Courtroom, by Paul Murphy.

Thank you to Tuttle Publishing for providing me with a copy of True Crime Japan to escape my reality and read about another place. I have not received any compensation for this review and all opinions are my own.

True Crime Japan was written by Paul Murphy, an Irish Journalist who spent 12 months in Matsumoto City, Nagano, sitting in a court room watching the cases that came before the judges. He studied the way the defendants acted in court, the way almost all of them pleaded guilty, how they penned letters to the victims of their crimes and gave money to them in the hopes it would help them be seen in a better light. Mothers, Wives, and families came to say they would take responsibility for the accused upon their release, and how they failed to keep them out of trouble.

One of the reasons I chose to move to Japan was because it was one of the safest places in the world to live, especially as a woman. The crime rate is notoriously low, and even events like antisocial behaviour are relatively rare. Thinking back, I don’t recall having ever seen an instance of graffiti, and even litter was rare. The collective society rather than the ‘me’ society, I believe was a major part of this, but it does also have many more facets.

I was forgot my wallet at the check out at a grocery store once and it was duly handed in for me to collect. A friend had lost his cell phone on a number of occasions and always knew he’d recover it from the police box the next day. That’s not to say that crime didn’t exist. There was word that a woman had been raped in our city while I was there, though it wasn’t in any English news, and whispered as it was. One hears about the Yakuza (Japanese mafia), but they keep a low profile. So, what happens in ‘regular’ cities around Japan? I was curious to read this book to find out.

Each chapter in the book presents several cases. Here is a small selection of examples:

Theft was one crime I wasn’t surprised to read about. Senior citizens stealing from shops, even if they had the money to pay for the items. I’ve read about this before, so that wasn’t too surprising for me. In one case the offender didn’t want to risk their retirement savings on purchasing fried chicken for dinner for the family.

The case of a man turning himself into police for for doing a small amount of drugs. The police would not have known about it otherwise. This was more surprising, as it certainly would not be a normal day here on the Island of Ireland, nor in North America. Japan really does have a zero tolerance policy when it comes to drugs, and although one can’t simply turn themselves in, because there was evidence, charges were laid.

The case of a couple who planned their suicide by driving off a cliff with their 21-year-old daughter in the car when life’s circumstances became too much due to substantial debt on a home they were building, a decrease in income, and looming university bills. In addition to this, they had attempted to burn their home down ahead of their foiled murder-suicide…but that, too, failed, resulting only in smoke damage. Instead of telling their daughter that they couldn’t afford her uni fees, and look for other options for income, they thought it was best for all if they died together as a family.

After you read about many of the cases reported on from Matsumoto’s courts, you come to this chapter that gives an overview of life in Japan from school to available opportunities, gang life, and the part I found very interesting was the section on prison life. There are only a couple of places in Japan where gaijin (foreigners) can be held, and this is usually in solitary. Prison life is very hard compared to the Western world; there isn’t any heating or cooling, and the rations are very meager. The day is regimented, and talking isn’t permitted. Prisoners work 40 hour weeks for less that 30 cents an hour.

Despite the hardships of prison life, there are those who become institutionalised and cannot function in everyday society after their sentence has been completed and they go on to perpetuate another crime with the intention of being caught and sent back to prison.

Overall, this is an interesting and insightful look at crime in Japan, and the ways in which it is varies from other societies, which gives good food for thought from a sociological perspective.

Japan: A Guide to Traditions, Customs and Etiquette