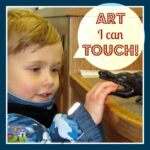 A little while ago our local library had a fabulous art exhibit.  There were several paintings hung around the library from different parts of the world that an individual had acquired over time.  There was a book that you could look through that explained where each piece came from and how it had made it into the collection.  I thought this added a touch of personalisation as well as interest.  There was also some touchable art…

Now what made this exhibition unique was that you could enquire at the desk and ask to handle a sculpture.  This was a great idea for the children to explore art up close.  There were two items that they could handle; each of them very tactile and interesting.

Tristan’s favourite was a crocodile with sharp teeth and spiny scales carved from wood.  He stood eye-to-eye with it for ages and ran his fingers over the scales and taunted it by putting his finger into the croc’s mouth.  He also discovered that if he ran his fingernail back across it, it produced different sounds in different areas. 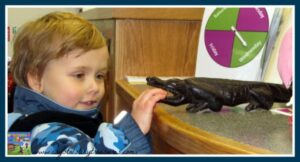 Kallista was more focussed on the colourful stuffed elephant that she could squish and cuddle. 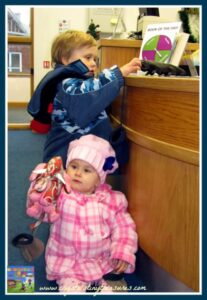 The exhibit has now moved on, but we hope that there will be another ‘hands-on’ one again in the future.

As an update, Tristan has now had his own book signing at the library after his first poem was published.  Read about it here.