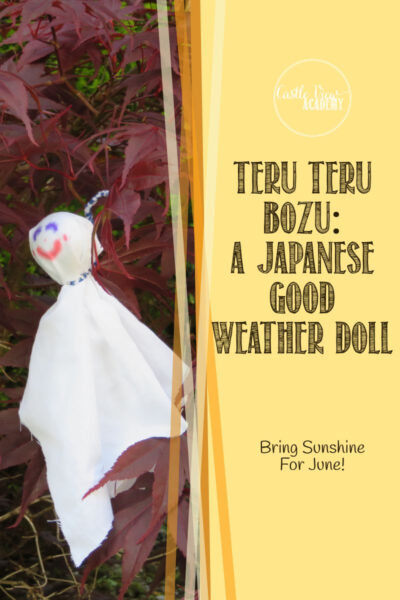 June in Japan is known as the rainy season, and I can attest first-hand that it is true.  The rain in June was incessant and it honestly seemed to rain 24 hours a day, which when mixed with warm to hot temperatures day and night, led to such high humidity that it was a difficult month for me…the warning of a possible typhoon approaching should have been bad; but for me the increased winds meant a reprieve of the heat.  But one can’t control the weather…or can they…? With a Teru teru bōzu doll you just might.

The History of Teru Teru Bōzu

Unfortunately, I didn’t know about Teru teru bōzu while I was in Japan; in fact it was only last year that I became familiar with him and his powers over the weather.  In this post I will share a little of the history of this mysterious creature and show you how you can make one for yourself!

First, who or what is Teru teru bōzu (照る照る坊主)?  This is a traditional Japanese doll that can change the weather from rainy to sunny!  Teru means shine or shiny, and bōzu translates as bald, as in a Buddhist priest as they have shaven heads.  So a Teru teru bōzu is a bald-headed monk.   Are you still with me?  Good.

Children make these dolls while singing the Teru teru bōzu song and then hang them at a window or outdoors in hopes that the following day will be sunny and dry.  If the day is sunny, then Teru teru bōzu will be rewarded with a golden bell and sake, but if it rains, then you cut of poor Teru teru bōzu’s head!  Not a happy ending, but then again, many Western fairy tails and nursery rhymes also meet an unfavourable fate, such as the wolves in Three Little Pigs and Little Red Riding Hood, for examples.

READ MORE:   Hooray For Spring! With This Color-Mixing Book!

How to Make Teru Teru Bōzu

Making your own Teru teru bōzu is super simple and only needs a couple of supplies:

Yes, this is so easy that you are certain to have the supplies already, so go grab them and start singing the Teru teru bōzu song!

Put one piece of cloth or tissue flat on the table.

Squish up the other piece of tissue and place it (or the ball) in the centre of the flat piece.

Gather the fabric around the ball and use your ribbon, strings, or pipe cleaner to tie it all together.

You can add a face to your Teru teru bōzu now if you’d like, or you can leave it plain and add a face as a reward if he does his job and the weather is fine.

Hang your Teru teru bōzu at a window or outside under the eaves or in a tree.

We first made Teru teru bōzu at a Japan Society meeting and since then I have come across references to him in All About Japan, and elsewhere, too.

After we arrived home, a little while later Kallista wanted to have a sunny day and hung her Teru teru bōzu outside in our Japanese maple tree. And lo and behold, after the wettest June in years, the weather changed the following day and the sun came out and the weather was great!  And it stayed that way for quite some time.  It’s a true story!

I’m curious if the Teru teru bōzu has worked for you?  Let me know in the comments below!

READ MORE:   Toilets From My Travels: From Squat Toilets to a Loo With a View

I’ll leave you with two versions of the Teru teru bōzu song; one with English subtitles and one where you can sing along in Japanese:

Teru-teru-bozu, teru bozu
Do make tomorrow a sunny day
Like the sky in a dream sometime
If it’s sunny I’ll give you a golden bell.

Teru-teru-bozu, teru bozu
Do make tomorrow a sunny day
but if it’s cloudy and I find you crying (i.e. it’s raining)
Then I shall snip your head off.

Previous Post: « Winnie’s Picks Paint By Number Is As Easy As 1-2-3
Next Post: Say Thank You With A Golden Ticket Treat »