Home » Books » A Taste of the World: What People Eat and How They Celebrate Around the Globe 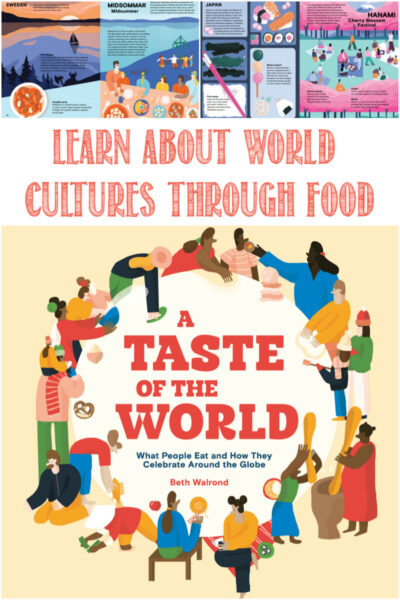 A Taste of the World: What People Eat and How They Celebrate Around the Globe is an interesting book for children to learn about world cultures through food.  I know my children love anything to do with food, so this book grabbed their attention and they dove straight in. 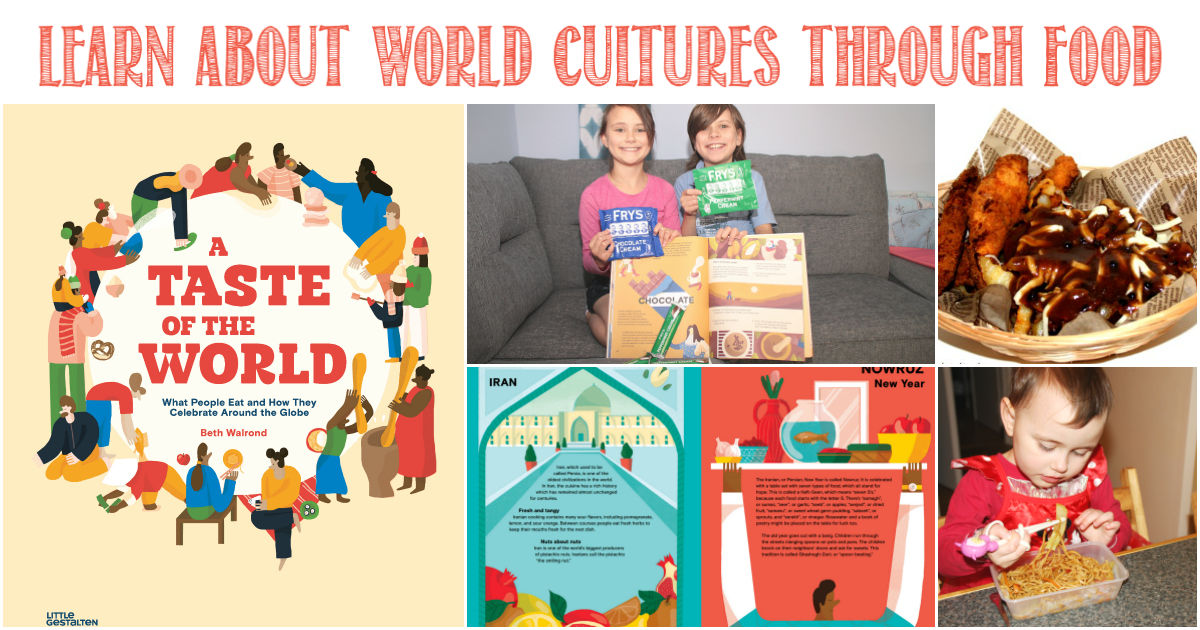 “Festive feasts from around the world to bring people together, celebrate and share stories,” is the tagline for this book, and it certainly does do that.  How often is it said that the heart of a house is in the kitchen?  This is true, not just in North America or Europe, but around the world.  Little Gestalten kindly sent us a copy of A Taste of the World by Beth Walrond so that we could review it and share our opinions with you.

This book is divided by continent, for the most part, and in each section it goes through some of the common foods and different countries; why they are important, as well as some of the festivals that take place within that country and how that specific food is important to it.

Starting off with Asia and the Middle East, of course, you will find rice.  I will choose Japan as one of the countries, because as you know, this country means a lot to me personally.  The festival highlighted there is hanami, the cherry blossom festival, and the way that rice is incorporated into it with sakura snacks, mochi (a sweet rice cake),  and bento boxes which have all 5 tastes (sweet, sour, salty and bitter and umami) incorporated into them as well as almost every meal in Japan. 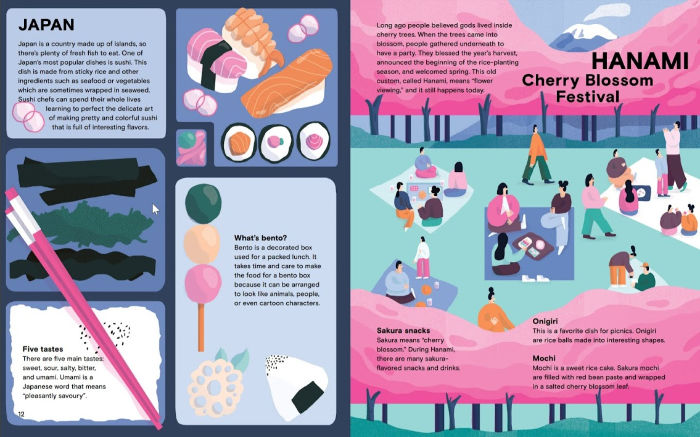 There are also dedicated pages for Turkey, Thailand, China, Iran and other places in Asia.

In Africa, the main focus is on Morocco, Egypt, Ethiopia and Nigeria, where spice is one of the major foods incorporated into everyday life.  A few years back the children had fun learning about spice through their smell.

In Ethiopia the big celebration is Enkutatash, the new year, and this country is also known as the birthplace of coffee, which so many adults consume daily around the world.

Nigeria, focuses on the Fish and Cultural Festival known as Argungu. Children may be familiar with yams and perhaps when they’re a little older, kola nuts.

Egypt is often a country and culture that is studied by children in school and you can bring this into your discussions using onions, fish, and trying halva.

The European cultures touched on are the United Kingdom, Sweden, Germany, France, Italy and Spain.  With the Continental Christmas market just opening up in Belfast, the children will be able to see many of these foods available there.  The aromas of the cooking is always one of our favourite things when we visit each December.

Grains are important to the European culture.  Grains such as wheat, barley, oats corn and millet are made made into pretzels, bread, pasta, and other foods.

France has as many cheeses as there are days in the year, which quite astounded my children.  In fact, today I received a message from one of my high school pen pals who is going to be sharing his Swiss family’s cheese fondue recipe with us; we’re all looking forward to that!

Germany, of course, is the land land of the sausage, with over 1500 varieties, and this is strangely one of my comfort foods and one of the foods I miss having easy access to.

The festival highlighted for the UK is Guy Fawkes Night, which is celebrated mainly in England, and not so much here in Northern Ireland. The foods representing the UK are haggis (the national dish of Scotland), fish and chips, as well as the humble sandwich, which probably changed the world forever.  If you’re looking for something a little different from Northern Ireland, check out this recipe for a crisp butty.

Food and Festivals of The Americas

The North America, where I hail from Canada, is represented by the maple syrup harvest, fiddle heads, and poutine.  Poutine is becoming known more around the world, rather than just being popular in the province of Quebec, as it was when I was in high school. 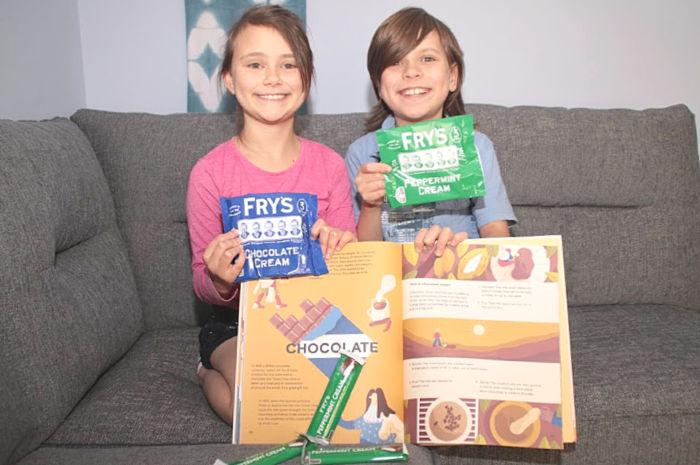 The history of chocolate and how it is made is described within the Americas, and it’s connections to Spain, France, and the UK are all mentioned.  One interesting thing is that J.S. Fry & Sons (from Northern Ireland) created the first actual chocolate bar. Believe it or not, there are still a couple of chocolate bars by that company floating around and the children were so happy to have found those in the shop and have a chance to try them out, as I’m sure you can believe.

Hot chilies are featured in Mexico, as well as various beans and corn; the varieties of which are just astounding and all are loved by our family. 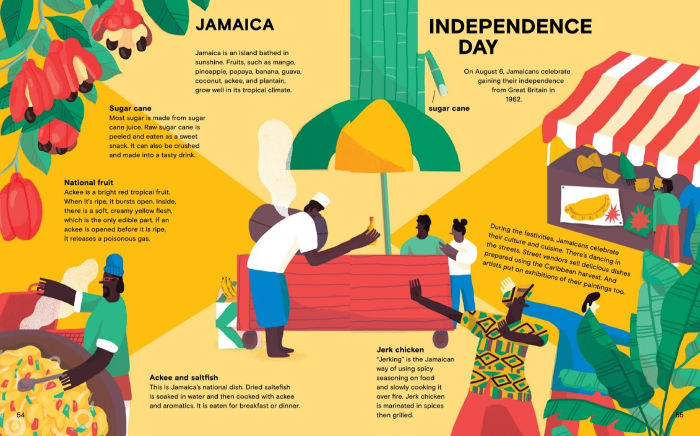 Many Argentineans go to dance class, while my daughter loves to watch Strictly Come Dancing here in the UK. Every week between September and December you’re certain to see Argentinian dances in there.  Maybe we should try making empanadas for a meal before watching the show!

And of course the USA has hot dogs, tacos, bagels, and burgers, too.

Food and Festivals of Australasia and oceania

Down in Australia and Oceania you’ll find that Christmas is often celebrated with a barbecue down on the beach in mid-summer.  You’ll also learn about bush food, as well as some sweet treats that may not appeal to everybody.

And the back of the book you will find instructions on how to use chopsticks, different ways of holding a knife and a fork, a world map where your children can find and spot the different foods that are particular to an area, and then there is a glossary of terms with illustrations and definitions, which is very handy.

This is a book we were all looking forward to reviewing and it can relate to so many about the world’s cultures. Children can talk about how some of the foods are the same or similar, and how some of the main foods are different. For example, in North America I had a friend who could not have a meal without a slice of bread, or she didn’t consider it a meal, while in Japan, rice is served at every meal.

Food is one of the ways that can really enhance understanding, as well as having some fun trying new recipes and using new ingredients. I don’t think anyone can ever grow bored of food from around the world and all it has to offer.

A Taste of the World can be purchased through:

Here are some additional Little Gestalten Books we’ve reviewed that you may be interested in: 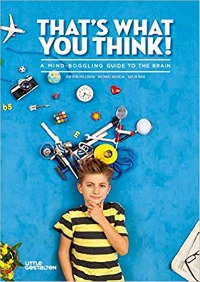 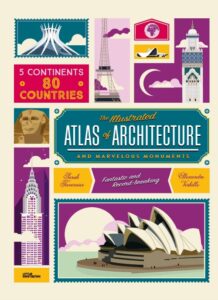 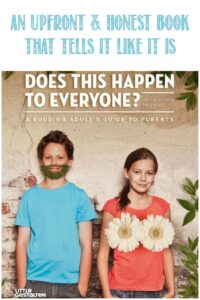