Space Week is now in full gear…but for us, it really began a week ago.  Today I’m sharing the two highlights of our week with you.  Watching the lunar eclipse and meeting a NASA astronaut (hint: this time it wasn’t Chris Hadfield). 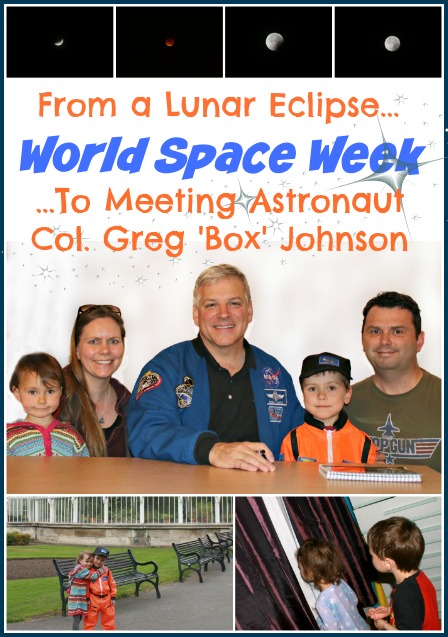 I’m sure most of  you know that last week there was a lunar eclipse.  Here in the United Kingdom it took place during the middle of the night.  And yes, we were just crazy enough to get up and watch it!  Well…Phil had a quick peek and then went back to sleep because he had to work in the morning, but Tristan, Kallista and I were up from 2-5 am  watching the event. 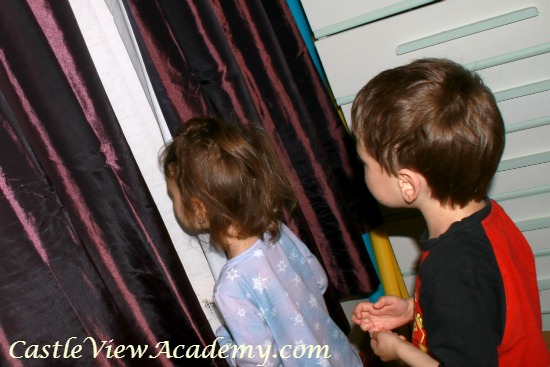 Having the opportunity to do things just like this really makes homeschooling worth it!  If the children were in public school they’d have had to stay in bed so they could be fresh and alert in the morning.  Instead, we watched the eclipse and slept in later.

We didn’t head outdoors into the cold, but we had the perfect view from the cozy indoors.  I set up the tripod and took some photos while Kallista told me just what was happening with the sun, earth, and moon to cause this event.  I was quite impressed that she knew it well enough I didn’t have to look it up on the internet to show her. 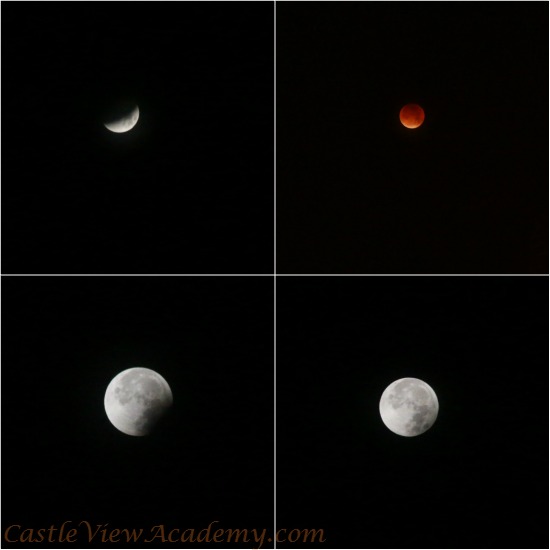 The next time a total lunar eclipse coinciding with a ‘blood moon’ won’t be until 2033, and I felt very privilaged to have experienced it with my children.  Tristan said it was ‘the best night ever!’

It was really quite interesting to see the activity on Facebook groups with folks around the world (mostly in the USA) posting pictures of what they were seeing.  We were all looking at the same moon in different time zones and sharing the experience together.

To top off our week, we went into Belfast and listened to NASA astronaut, Col. Greg H. ‘Box’ Johnson give a talk at the Ulster Museum.  It was really inspiring for everyone, and was geared towards the ‘younger’ generation of future space explorers.  He was 7 when he watched man first step on the moon, and since then he focussed his career to get him into space.

He’s been on two space missions, and he had some very humorous tales to tell about incidents that occurred when he landed back on earth (like dropping a can of Coke on NASA’s big boss because he let go of it to shake his hand…forgetting that it wouldn’t just ‘hang’ like in the ISS, and indeed it crashed to the floor)!

Prior to attending, the children did a little research and watched this video.  In it you can see and hear some of the talk that he gave in Belfast.

Tristan thinks it’s quite coincidental that his first flight was while he was in the neonatal ward after his early birth!  He was also born in the United Kingdom.

I found it inspiring that Col. Johnson was just a little older than me during his first space flight STS-123.  He was also on STS-134, the last Endeavour flight.  And he received his MBA at my age…there may be hope for me yet!  I do like that he kept on learning even though he was working for NASA.  Lifelong learning is for everyone! 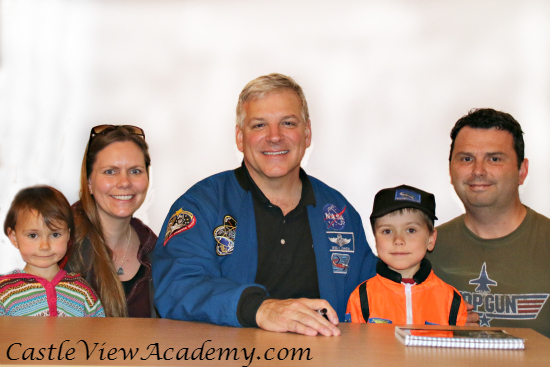 After his talk, we were able to get his autograph and a photo taken with Col. Johnson.  This one is a keeper!

Following this, our space exploration continued in an inflatable planetarium where a gentleman showed us photos he took from his own garden of various planets and the sun.  Then he lit up the ‘sky’ with stars and pointed out a couple of constellations until it was announced that the museum was closing and we had to go on our way.

READ MORE:   Interview With a Firefighter

What a great week it was, and we have a few more science experiments lined up to try this week.  What will you be doing for Space Week?