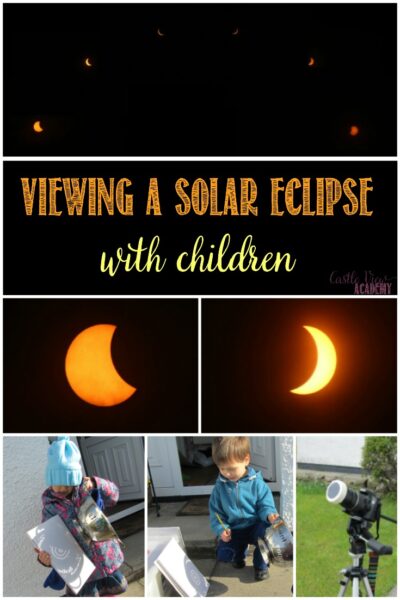 In March 2015 there was an almost total solar eclipse here in the United Kingdom.  This month there will be a total eclipse in the United States.  Two years ago when we met astronaut Box Johnson the children also met a gentleman who already had his tickets booked to travel over from the UK.  I know many homeschoolers will be heading down from Canada and other parts of the USA to get a good view in person as well. 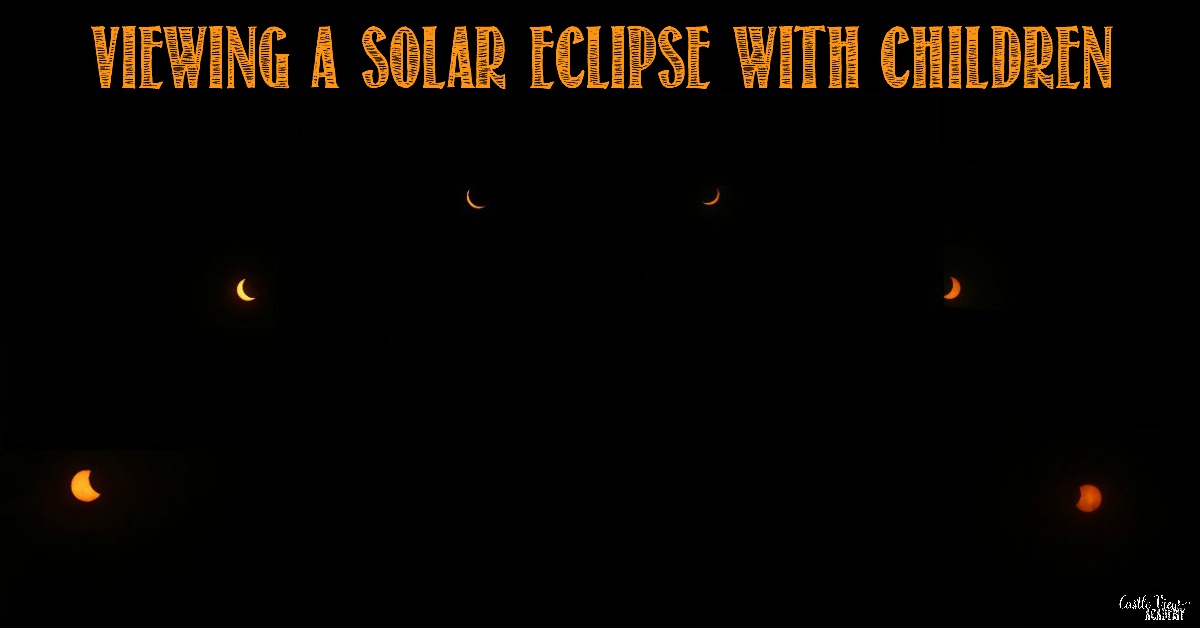 We won’t get over for this event, but I thought it might be fun to share our solar eclipse experience with you.

We had been planning to watch and I even ordered a special solar filter sheet (similar to this one – this post contains affiliate links) for my camera.  I had ordered it about 4 months in advance and had a very good deal on it.  However, for days before the event the forecast had been for heavy clouds so I didn’t turn the filter sheet into something that would fit my camera.  Right up until the morning of the big event, the forecast was for clouds so we were going to give up and just carry on as usual and watch the eclipse on the BBC news…

That was until the clouds broke and the sun came out just a few minutes before the start of the eclipse.  Let’s just say I jumped up and raced about the house like a mad woman trying to make a way for the filter to be held up in front of my camera!  Cardboard, masking tape, scissors, the filter, and my camera lens hood were pulled into action immediately! 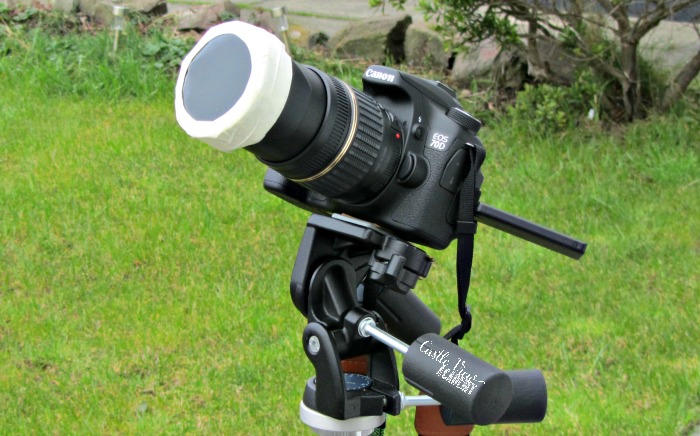 I grabbed the tripod and set it up outside on the driveway.  I attached my camera with its make-shift filter attachment, and set up.  I flipped the viewing screen on my camera out so I would be looking down at the screen to focus and not up towards the sun.  This also meant that my children could also watch on the screen without my having to worry about looking towards the sun. 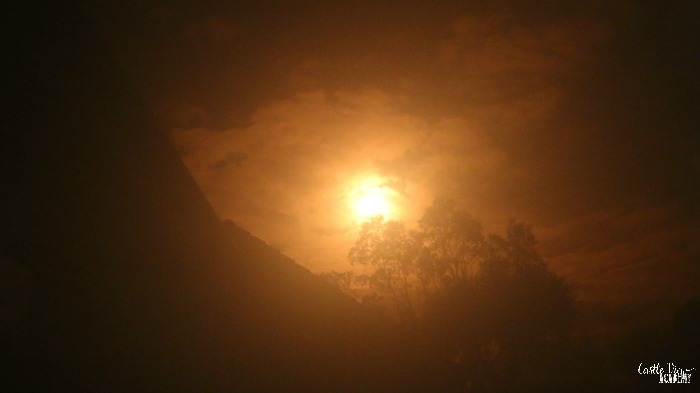 I was able to see the sun just above the trees at the end of the street, and though there were still clouds in the sky, the sun itself was in good view.  Every 5-10 minutes I had to adjust the focus of the camera as the sun moved up and across the sky and out of the camera’s view. 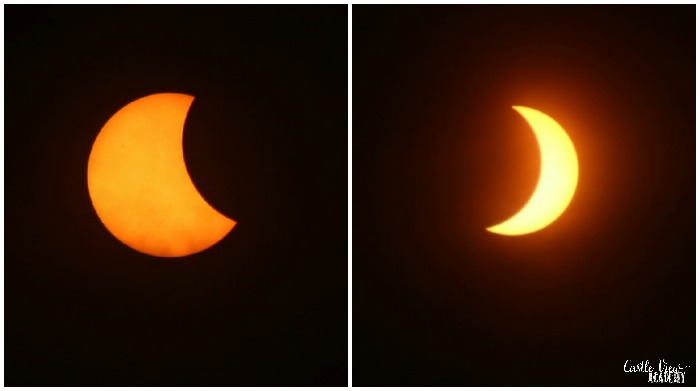 I had a little fun and used several different settings on my camera to see what the results would be.

Kallista found it was too cold outside for her so she cuddled up in the bed under the blankets and did most of her watching on the TV.  Tristan ran back and forth; keeping me updated on what the news was reporting, and seeing what he could on the camera’s screen.  He was so excited as he’d been waiting for this day for so long! 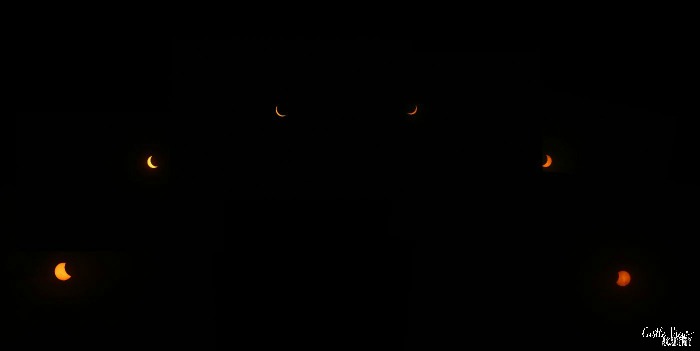 I also set up an activity for the kids to keep them occupied as it wasn’t entirely exhilarating for kids as it did take a couple of hours from start to finish.  I brought out a colander and a big piece of white cardboard.  The kids took turns holding the colander up while the other traced the resulting shapes of the light on the cardboard with a pencil.

What started out with circular shapes later turned into crescent shapes.  Kallista joined us for this activity…dressed for winter. 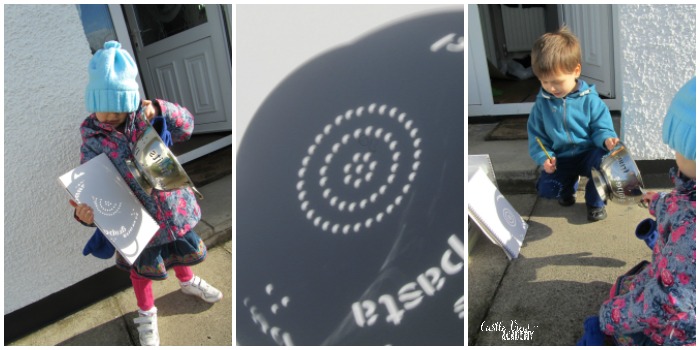 The children had also made themselves a pin hole camera, but it wasn’t as successful as the colander.

The clouds did return just before the end of the eclipse, but I must say that I was more than happy with what we had experienced and the unique photo opportunity I had.

The children enjoyed the experience so much, and loved that they didn’t have to go to school and sit in a classroom missing it.  In fact, when there was a lunar eclipse later in the year, they insisted I wake them up during the night to watch.  Of course, I kept my promise and did this so we could make some special memories together. 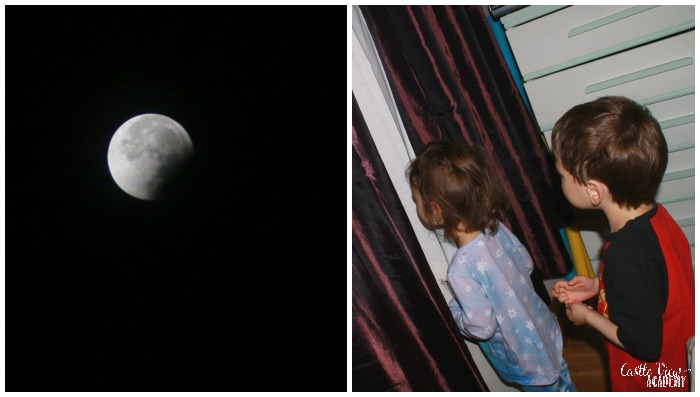 Will you be viewing the solar eclipse this year?  Where will you be?  Let us know how it goes in the comments below, or share your photos with us on Facebook, we’d love to see them!

Here are a few interesting links you might find useful for the solar eclipse: