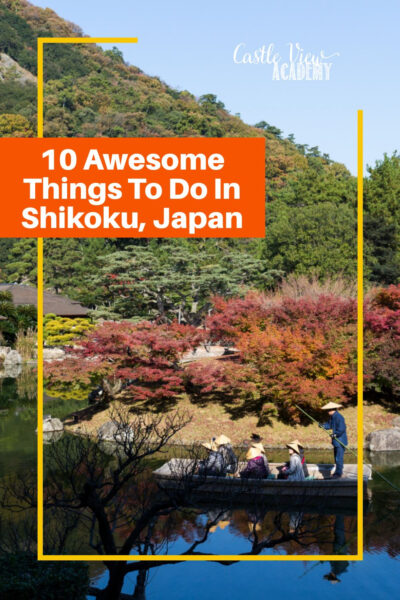 There are so many things to do in Shikoku, Japan, that this is one of the places I made sure to return to during my time in Japan. The island of Shikoku is the smallest of the 4 main islands of Japan and is more laid-back and less crowded than most of the other areas I’ve been to. You’ll find the atmosphere friendly, the food delicious, and you can enjoy nature and learn about the history of the area, too. These are some of my favourite places and top recommendations for Shikoku.

My number one place to visit on the island of Shikoku is the Iya Valley, although it’s so beautiful in its natural beauty, I actually hate that more people will see this gorgeous location. I took a small bus tour through the valley, visiting a traditional home, visiting a gem museum, eating a seasonal lunch at a restaurant, taking a short leisurely trip down a river past the ‘Lion Rock,’ You can read more about my experience in this area in my post, I Is For Iya Valley: A-Z of Japan. The best part of the day for me was crossing the vine suspension bridge that needs to be rebuilt every 3 years.

This gorge is another part of the Iya Valley experience. This is where you can see the ‘Lion Rock’ in the left photo. A geologist would love to explore the rocks and formations in this area, and in fact, there is a gem museum attached to a little restaurant above where we started our boat tour. It is so peaceful here, I could easily spent a week just ‘being’. There are some onsen (hot springs) that would be a great way to unwind, particularly if they’re open-air onsen.

While I was in Takamatsu, I was in my small room under the rafters in a little out of the way place by the river when I heard some music. I looked out my window and a little ways away I could see about a dozen local people practicing the famous dance of the area in preparation for the festival later in the summer. Of course I had to wander down and watch. I didn’t want to intrude by taking photos, but you can see some photos and read about it in this Awa Odori article.

Even outside of the big cities of Japan and living in Toyama with 360,000 people, it was busy enough and there was always noise of traffic, cicadas, announcements, or something else. If you want to get away from the hustle and bustle, but still feel connected, walk down to the Takamatsu waterfront and have a seat and watch the sailboats as the sun goes down. The peace here is one of the reasons I made a return trip to Shikoku.

At the waterfront is a unique lighthouse with red glass walls, which you can see in the distance above. For more information, see The World’s First Red Glass Lighthouse Illuminates the Seto Inland Sea!

Takamatsu castle is considered to be one of the 3 great ‘water castles’ of Japan as its moats draw their water from the sea. Looking back, of the castles I visited in Japan, many were up hills or inland a little distance and not adjacent to the sea, although next to rivers wasn’t unusual. Most of this castle was destroyed in the past and little of the original structures remain, but if you like castles, it’s still a good one to see. Be sure to wander around the gardens surrounding the castle, as they are gorgeous.

Many a time my children have heard me talk about going up the Mt. Bizan Ropeway in the heat and humidity of mid-June 2002 (this was to be the hottest summer on record at that point). The humidity had caused a haze so thick you couldn’t see up nor down the mountain, but right below the cable car, following the trail up the mountainside were the largest hydrangeas blooms I’ve ever seen – and all very blue. Until that summer I had never seen this plant, although they are common in Japan as well as the UK, I would find out 2 years later.

At the top of the mountain you can walk through a small tourist info center and learn about the area. I also purchased a crackle-glaze chawan, a bowl used in the Japanese tea ceremony. Although I didn’t have a great view of the surrounding area, it was still an enjoyable morning.

Shikoku Mura is an open air museum where you can learn the history and culture of the region. On a little island a short distance away, you can wander around the various houses and buildings all relocated to this museum. Above, you see the soy sauce kegs in their wonderful clay colours. You’ll also see an open-air theatre, a kabuki theatre, and a miniature vine bridge like the one I crossed in the Iya Valley.

I was able to watch the sun set from here, and it was one of the best sunsets I’ve seen in Japan.

Watch the video below and you can have a virtual walk around the museum:

Ritsurin Koen (garden), isn’t officially one of the 3 most beautiful gardens in Japan, but it really should be, in my books, having visited the top 3. It is a must-see for anyone who enjoys Japanese gardens. I was disappointed that I didn’t have more time here, and I’d love to see it in seasons other than summer.

Still looking for more things to do in Shikoku with kids? Pack a picnic lunch and take the ferry over to Megijima Island and meet Momotaro.

Ah, Megijima (Devil) Island, left me with many memories. I took the ferry over, then walked through what appeared to be an abandoned village with the streets covered in sand; it actually felt a little like walking into an old Western movie. I followed the winding road up to the top of the island hill. Almost at the top is a cave, that at one time was used by smugglers, I believe.

I was the only person in the cave when suddenly the lights went out! There wasn’t any way to see, and as there are deep drops to who-knows-where in some areas, I didn’t want to fall off the earth. I very carefully walked towards the very slim glow of light around a few corners and made my way out. As far as I’m concerned – the demons are still there! The views from the top of Megijima were lovely before walking back down to meet the next ferry. Here’s an article that gives some more info about the cave.

When you travel around Shikoku, you’ll no doubt see people of all ages dressed in white, walking from temple to temple on the island in pilgrimage. They do it for religious reasons, because they are praying for something specific, sightseeing, or other personal reasons.

There are many more things to do in Shikoku, of which I’ll share a few more another time. For its small size, the island is packed with an abundance of activities and beauty. If you want to experience Japan without the crowds or tourists, then think about spending some time here.

More Things To Do In Shikoku and Around Japan