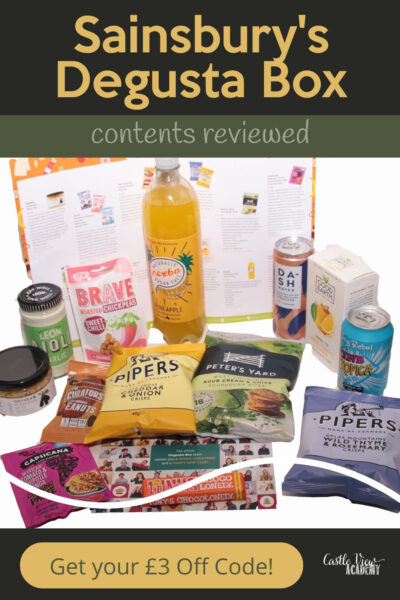 With the weather turning cold and people staying in more once again, there’s no reason to go out when you can have a box of treats delivered straight to your door each month bringing you plenty of choice. December’s Degusta Box was filled with items that you can find in your local Sainsbury’s store.

We received this Degusta Box in exchange for our honest review.

Let’s start with the contents of the December Degusta Box before moving on to our top picks.  Each monthly box contains between 10-15 products; some aren’t yet available in the shops which gives you the first chance to try them out!  The short version of this month’s box is that there are 13 items; 7 snacks, 4 beverages, and 2 meal items.  The long version is….

Use Code ZPH3A and save £3.00 off your first Degusta Box

Peter’s Yard Sourdough Bites was our top pick for December’s box, and were on our annual cheese board on New Year’s Eve. I love sourdough, and have introduced the rest of the family to it, as well. It’s very difficult to find over here, but these bites have their distinctive tang, along with sour cream and chives, making for a great snack, with or without cheese or a dip.

The Curators Cocoa Caramel Peanuts are really very good. I’m not always a fan of peanuts, unless I’m in a specific mood, but these are very light, and not too peanutty. Beneath the dusting of cocoa powder is a subtle hint of caramel and a touch of salt. Made with only 4 ingredients, these are a wiser choice than other chocolate covered peanuts and won’t weigh you down.

I always have a weakness for potato chips (or crisps, as they’re known as here in the UK). The December box contained 2 40gram bags. One was Cheddar and Onion, which is very good; perhaps a touch cheesier than other brands, which I like. The other flavour was Wild Thyme and Rosemary. The herbiness of these would make them a good addition to chicken sandwiches for a picnic, or give a crisp butty extra flavour.

On occasion we have roasted chickpeas ourselves, but they are fiddly and take perhaps more time and energy than we have patience. Brave Roasted Chickpeas are already prepared and seasoned for you, leaving you time to relax and enjoy that Christmas book instead of toiling in the kitchen. We received a packet of Sweet Chilli flavour (they’re also available in Sea Salt or Dark Choc). These are small chickpeas, nicely roasted with a resounding crunch, but they aren’t hard. The flavouring gives them some colour and just a slight warmth, so they shouldn’t be troublesome for those who aren’t spice fans. Packed with protein and fiber, too, they make a good snack.

Nexba Pineapple Soft Drink was high on the list of the kids’ favourites this box. It’s fizzy, which is a treat for them, and the pineapple flavour isn’t ‘sting-y’ as fresh pineapple juice can be to sensitive mouths. It doesn’t have artificial sweeteners, nor sugar added. Personally, I wouldn’t mind a little more flavour in the beverage, but it would be a nice alternative to get-togethers (when they’re possible again).

Tony’s Chocolonely is a milk chocolate bar with tiny pieces of crunchy caramel and salt granules within. I like the unexpected crunch, but I’m not as big a fan with the salt as my piece was quite strong and the salt taste lingered. Tony’s Chocolonely are on a mission to create fair-trade and sustainable chocolate products.

We received a box of 15 Good Earth Tea bags with the flavour of Ginger, Tumeric, and Lemon. I like to experiment with flavoured and fruit teas, so this was nice to find in our box. I was a little skeptical, I will say, but the ginger wasn’t overbearing, the tumeric was there, but just a hint, and the lemon flavour was light and zingy, just as I like it. I enjoyed these, and I know my son will, too, being a fan of ginger tea.

Dash Water is fun because it specifically advertises that it uses wonky fruit in its beverages. I’m glad they’re being used (no one sees the fruit in drinks, so shape and size don’t matter) rather than rotting on the ground or sent to landfill. Ours was peach flavour, which could have done with a little more flavour because it was very weak. However, with a little splash of peach schnapps in our dash, it was a good combo with the flavours melding together.

Before trying Clwb Tropica Tropical IPA, I immediately wasn’t a fan of their product image. Between the name, the cartoon figures, and the colours used, it appears that they’re targeting children and teens, who are not of drinking age. That’s not to say that those of legal drinking are are no fun, but I don’t think they’re setting they’re best foot forward.

The flavour is meant to be pineapple, mango, passionfruit and peaches in an IPA (India Pale Ale beer). I absolutely wasn’t a fan at all (and I don’t mind flavoured beer), and Phil wasn’t keen on it either. It’s very heady and very bitter, which makes it hard to get past that to the fruity flavours.

There you have it!  The full run-down of the Sainsbury’s Degusta Box  – the ups and downs and in-betweens.  Have you tried a Degusta Box yet?  Give it a whirl and see what delights are in the next box!  Use Code ZPH3A and save £3.00 off your first box!

Use Code ZPH3A and save £3.00 off your first Degusta Box