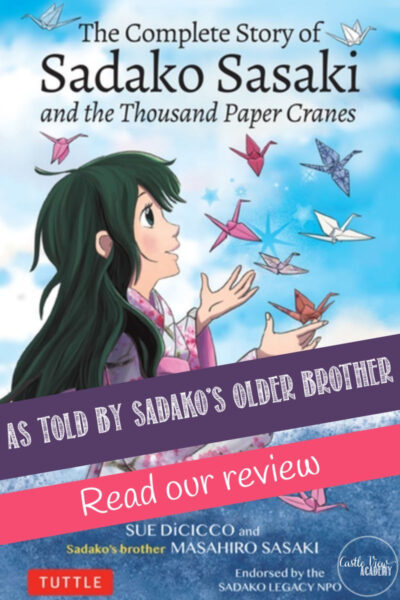 You may already be familiar with Sadako Sasaki and the story of her Thousand Paper Cranes, and perhaps you’ve read our post on Origami Peace Cranes. Following on from that book, Sue DiCicco undertook her next book with the special collaboration of Masahiro Sasaki, Sadako’s older brother, to retell her story and how she became perhaps the most famous girl in Japan and a sign of peace worldwide.

Thank you goes out to Tuttle Publishing, who kindly sent us a copy of The Complete Story of Sadako and The Thousand Paper Cranes to read in exchange for our honest review.

Sadako Sasaki was two years old when the atomic bomb, known as the “Little Boy” was dropped on Hiroshima on August 6, 1945 and created a hell on earth. Her older brother, Masahiro tells her story in this book for all to learn about her braveness and contribution to peace.

No one was expecting the vast and ongoing devastation that began that day. Sadako’s grandmother died in the immediate aftermath while Sadako, Masahiro, and their parents were relatively unscathed at this point.

The years that followed were very challenging as the city slowly rebuilt. Mr. Sasaki was able to set up a new barbershop and build his clientele until an unscrupulous neighbour swindled him and left the family in extreme debt.

Following on from this, Sadako became ill – even though ten years had passed since the bombing. She spent many months in hospital with her family hiding the truth from her; that she had the atomic bomb disease. Sadako was clever and did some investigating and discovered the truth but never let on that she knew she was going to die.

Even with all that she was going through, she thought about her family first and didn’t ask for pain medications as she knew they were very expensive and her family couldn’t afford them, although they did do everything possible to make her life as easy and cheerful as they could.

Sadako began folding paper cranes with every piece of paper she could gather (it was very scarce, so much was repurposed from other uses around the hospital). The legend says that if you fold 1,000 paper cranes while thinking of your wish, it will come true. It didn’t work for her, unfortunately, although she folded and folded and folded, even when she was almost too weak to move. Then she began again on another set to wish her dad out of debt. In total she folded 1,300 cranes.

Sadako was an inspiration to all who knew her. Her classmates and teachers fundraised to build a statue in her honour, Genbaku no Ko no Zo, The Statue for the Children of the Atomic Bomb, sites in Hiroshima Peace Park not far from the eternal flame and museum. Her folded cranes have been distributed to her friends, family, and museums around the world.

This is indeed a touching story and more so if you’ve visited Hiroshima – the memories of what I saw there flooded back to me and I teared up reading this book to my children.

So much about the bombings aren’t child-friendly and there are other books I’d like to share with my children, but they’re not ready for them yet (I wasn’t ready when I was 29). This book, however, is written in such a way (from the perspective of Masahiro, who was 14 when Sadako passed away) so children can relate to the language and everyday life portrayed. The photos and illustrations bring Sadako to life, too.

75 years later and Sadako is still inspiring others. Let’s hope our children are compassionate and clever and don’t lead the world into another age of destruction.

The Complete Story of Sadako and The Thousand Paper Cranes is very good as a read aloud so that you can talk with you children as you read. Talk about hopes, dreams, and possibilities, not just about war and illness. Let your children be informed and set them up to create a better future for mankind.

The author, Sue, has created the Peace Crane Project, where students and classrooms around the world pair up and exchange paper cranes, so check it out and sign up.

If you’re interested in purchasing  The Complete Story of Sadako and The Thousand Paper Cranes , it’s available through: