The past few weeks around our home have been everything pirate.  It all began when we were able to download Julia Dweck’s e-book “Pie-Rits” on a free Amazon download day from KiteReaders.

This book is so fun and amusing.  Even Phil was giggling away when we read it.  Since then one or both of my children request it on a daily basis.  You will be able to see my guest post review of this fantastic book on Friday at Mother Daughter Book Reviews. 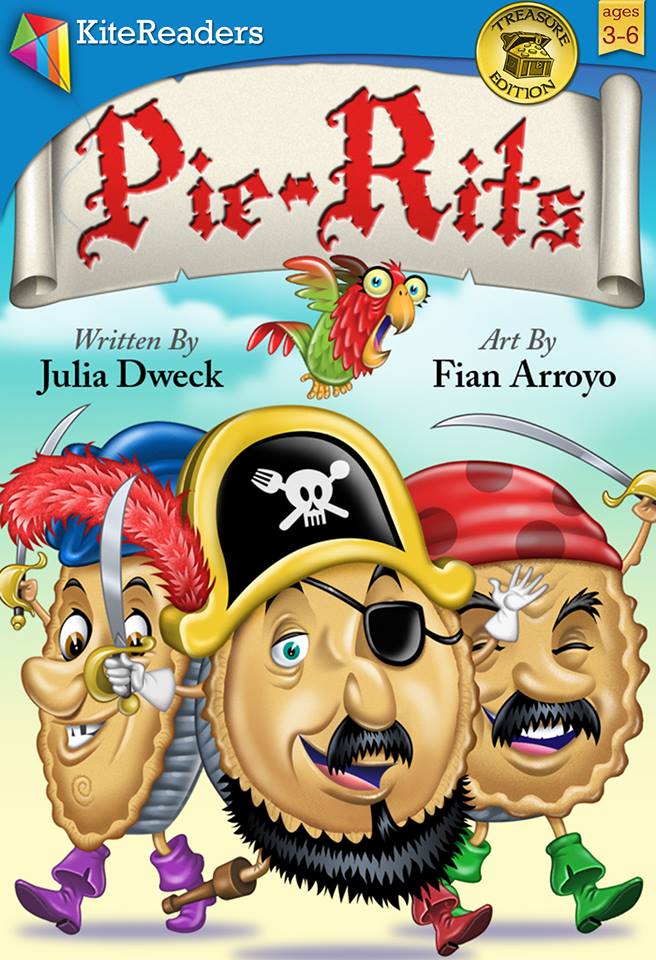 The week we downloaded Pie-Rits I featured Pirates, Parrots and Spies on Mom’s Library. The first art we did with the pirates theme was one of the ideas I’d featured from Like Mama-Like Daughter.  We recreated her hand print pirates, and gave them a little treasure chest.  All of the children enjoyed making these and have asked to make them again.  I think they enjoyed the novelty of painting their own hands! 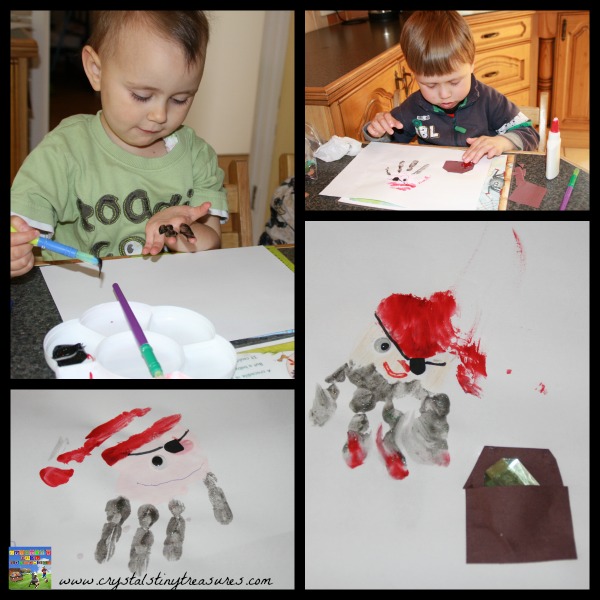 The second activity we tried was Fun-a-Day’s Exploding Treasure Chests.  The ‘recipe’ calls for Jello powder.  This was a tough decision to make as I only had 1 package of Lime Jello in the cupboard that family had sent over to us.  But in the name of fun, science, and pirates I sacrificed and used some of the precious powder to make our treasure chests.  Then we all had a treat when I turned the rest into some wobbly Jello for dessert!  The children really enjoyed this activity, and it took Tristan’s mind off his scraped knees and shiner he received earlier in the day when he had a fall while running.  This exciting activity is also a bit of simple science fun.  I love when children can learn while having fun!

The burough created a Pirate playground last fall and we hadn’t yet been to it. One early morning while Phil was on his summer vacation we got up and going early to go before it became too hot and too crowded.  The kids had such a great time and we almost had the park to ourselves for a short while.  I couldn’t take a photo of the big ship because there were other children on it, but it is pretty impressive and all 4 kids (young and old) had a great time and we’ll be back again another time. 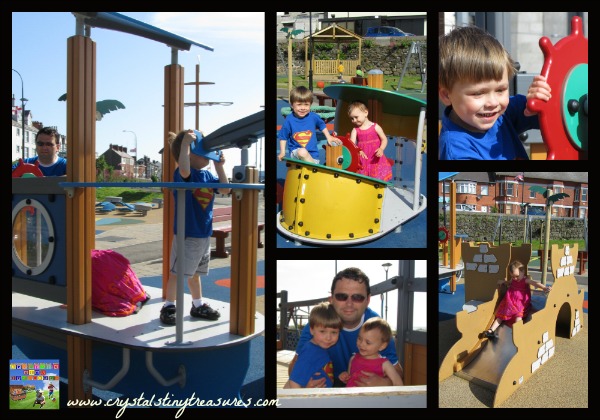 Then when I had finished off some fruit tea one morning last week, the empty tea box looked just like treasure chest to Tristan and I at the same time.  I had another box in the cupboard so I emptied the teabags into a plastic container so each child could have their own treasure chest.  To make these they simply painted the boxes inside and out and added some glittered paper strips around them.  For a little added something, and to use the left over ends of the strips Tristan and Kallista put their initials on the top of their box. They’ve been carrying these boxes around the house with them all week!  Tristan’s treasures are a wallet my mom made him, a badge he made last summer at a nature event, and 6 pence.  He frequently peeks into his treasure box just to make sure everything is there and in order.  Kallista’s treasures change several times a day, but at last check it was a bracelet she received for her birthday.

The Pie-Rit activity that tops them all is our re-creation of one of the scenes Fian  Arroyo. While reading this book one morning before breakfast and food was on my mind.  I thought “How fun would it be to make our own Pie-Rit scene?”  So a few days later while we were out I asked Phil to stop at the grocery shop for me to do a little special shop.  We spent the afternoon having such great fun!  Phil really threw himself into the fun and suggested we use Mr. Potato Head pieces for Pierre and Victor.  We washed them up and Phil went to work.  I’m not sure who had more fun, me, Phil, or the children (OK, i think it was the ‘big’ boy!). 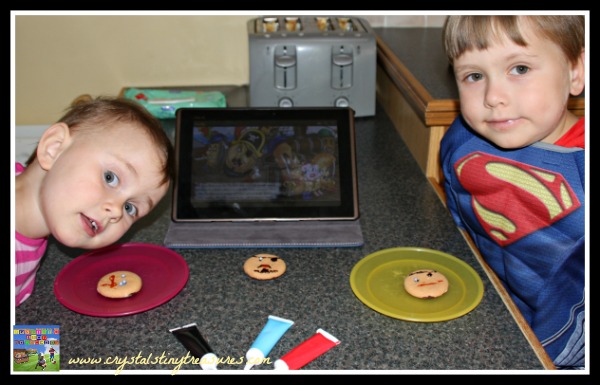 I stirred up a batch of icing for our ‘Cherry’ while Kallista and Tristan used the under-side of Jaffa Cakes to create their Pie-Rits.  These were Tristan’s choice for the Pie-Rits as they look a little like pies.  I gave them a quick reminder demo of how to use the icing tubes and they did great jobs making eye patches and mouths. 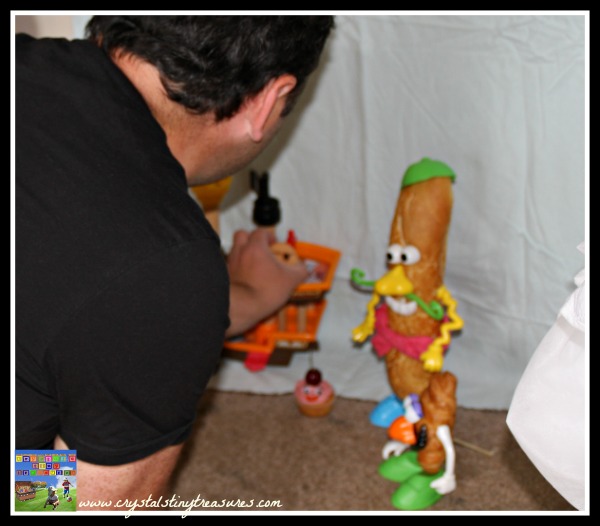 Phil set up the scene, borrowing Tristan and Kallista’s Pirate ship.  Donuts for the lifeboats, Pie-Rits strategically placed on the ship, and Pierre and Victor made their grand entrance. 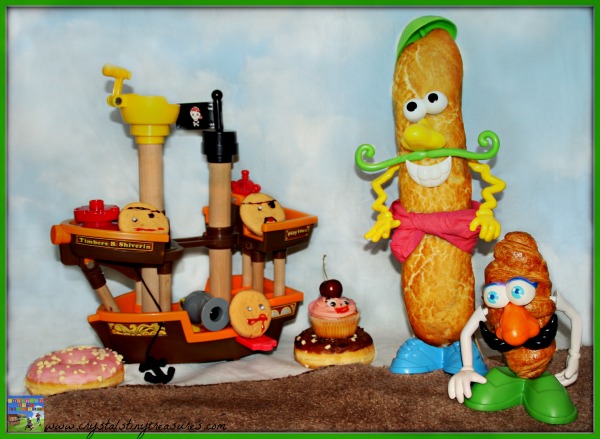 I sent a photo of our Pie-Rit recreation to Julia and she jokingly suggested we try making a stop-motion movie.  One mention of this to Phil and he began teaching Tristan how to do it using his super-hero figures.  He’s (Phil) is really getting into it now and having all sorts of fun.  Even Tristan has been making little movies on his own using his camera and filming Superman flying through the air.  Julia’s books inspire the creativity in all of us!

If you’d like to join in on the fun, you can purchase Pie-Rits through my affiliate link here.  I’d love to hear or see your pirate adventures!