This past weekend was full of fun and learning for our whole family!  There was an educational event that took place in our village and we were so happy to be a part of it!  The council organised a peregrine falcon watch for anyone that was interested.  I tried to attend last year but my wires were crossed and I ended up going at the wrong time and missed it.  This year I made sure to get a printed advertisement in addition to writing it on the calendar!

For a Saturday morning we were pretty well-prepared and arrived pretty much on time at the nature reserve.  This area is where Whitehead got its name long ago.  The cliff-face here used to be white with limestone.  Rock here was shipped by boat to many other locations for building.  The quarry sadly closed in the 1920s.  From the 1950s to the 1950s it was used as a dump which has now been covered over and left for nature to reclaim.

Fulmars and and a pair of peregrine falcons now use this cliff to build nests and raise their young.  You can see part of the cliff here in the background though it is no longer white limestone. 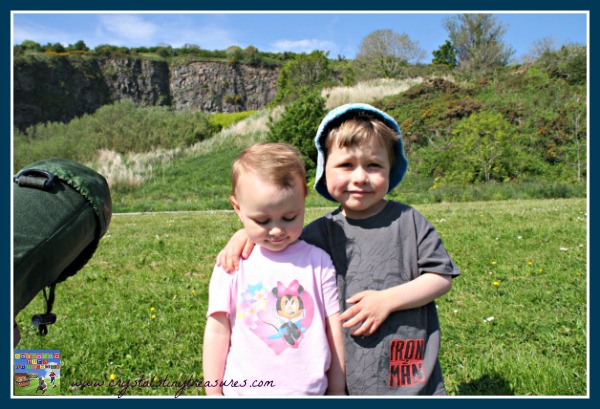 By the time that we arrived there was a fine crowd already gathered with telescopes and binoculars set up and ready to go.  We found a good place to set up our site.  We were fortunate to have both binoculars and a telescope on loan so that we could set our tripod up at the lowest level:  just the perfect height for our children to take part.  It’s fantastic to have children who are interested in nature and ask all sorts of questions about the world around them.  It’s also fabulous that there are so many opportunities in the area to learn about these things. 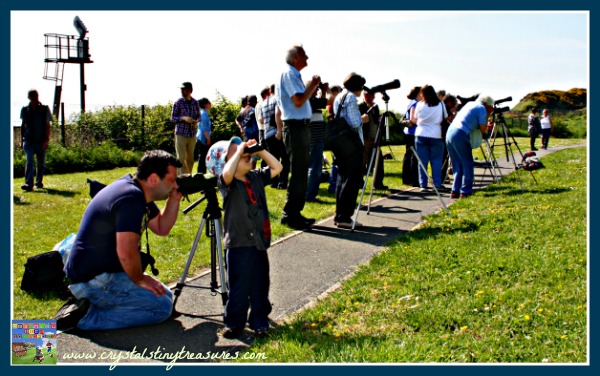 The Carrickfergus Burough biodiversity officer, Ben Simon was present, as was Ian Enlander, our local expert on all things about nature.   The children received a packet of postcards depicting all of the large birds that can be sighted in Northern Ireland.  We were surprised there were so many.

Once we had ourselves set up, and with guidance from the experts, we were able to find the well-hidden peregrine falcon nest up in the cliff face.  Every now and then you could see a little white ball of fluff, how exciting it was!  With a little patience and waiting we then saw two, then three little balls of fluff!  We were even able to see their little black eyes and beaks looking around while they had a good stretch and look around!  They looked just like the three baby peregrine falcons we had been watching on the live web-cam Minnesota Power hosts that Carolyn of Wise Owl Factory told us about.  Thank you Carolyn! 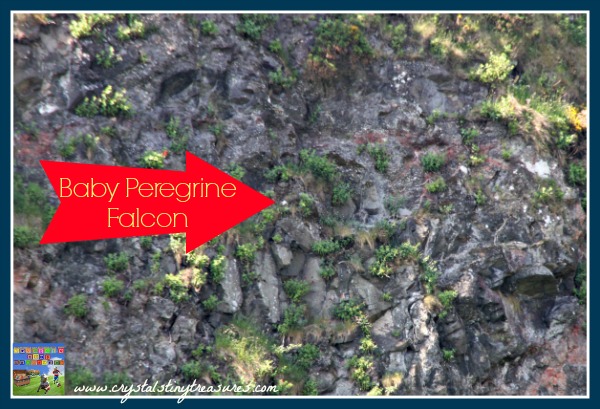 We were also able to sight the mommy peregrine falcon perched on a ledge a little ways away but keeping a watchful eye on her young brood.  These little chicks were just 10 days old, according to the people in the know.  Then she took flight and glided on the air currents for a short time before finding a new vantage point.  Then she thought she needed to look pretty for the cameras and began to preen. 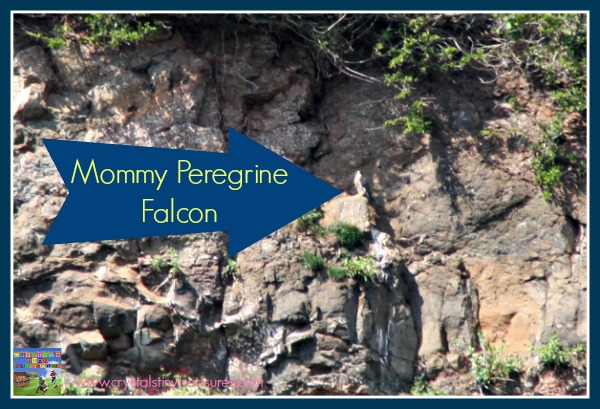 We stayed for about an hour enjoying the sights before we had to pack up again to head to the summer matsuri party held by the Japanese Society of Northern Ireland.  (I’ll write about this soon).  It was as even better than the Hanami party we attended last month.

We feel very lucky to live in such a scenic location that provides so many of the wonders of nature within walking distance and we’re looking forward to the summer events that will have us out in the fresh air learning about the flowers and water creatures of Northern Ireland as we wrote about last year.  For more inspiration about how to get your child out into nature, see our nature activities for kids page.  Or see our Spring ideas page for more…ideas for spring!

What is your favorite thing in nature where you live?