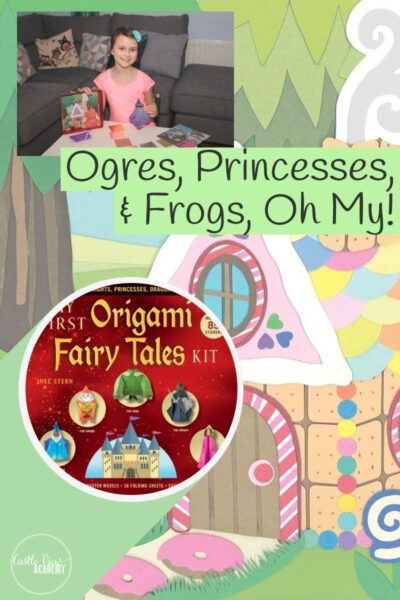 My First origami Fairy Tales Kit: Paper Models of Nights, Princesses, Dragons, Ogres and More is a cute Origami kit that I can see being used by children outside on a summer’s day or indoors while cooped up due to weather or illness. It’s certain to keep youngsters happy and entertained.

Thank you to Tuttle Publishing for sending us this fun kit which Kallista is pleased to review. We received this kit in exchange for our honest opinions about it.

This kit was created by Joel Stern and the instruction book has a key to the symbols that are used to make the creations in the kit, of which there are 14 different ones. There are also additional origami websites included for those who would like to learn more.

There are 6 backdrops are included, too, which is a fun addition. They are:

One just simply slides the backdrop into the flaps inside the box lid to hold it in place and then voila! Children have their own diarama/stage against which to let their imaginations and stories unfold.

Reenact traditional fairy tales, or create your own; the only limit is your imagination!

Your children will love to take photos of their origami models in front of the stage sets. They could create stop motion videos as a school or homeschool project, too.

They can put together origami for math, then ICT for the stop motion. They can learn about fairy tales and culture, too while researching and creating the scenes, too.

READ MORE:   The Little Book of Tokyo is Small But Mighty!

What a lot of fun.

Kallista was enchanted with this Fairy Tales kit the moment it arrived, and she could not wait to begin. In fact, she even took some of the pieces with her when I had a dentist appointment and she worked on the origami while I was having my pearly whites cleaned. She already had a hopping frog folded before I was done.

The Enchanted frog in the kit is fun as you can make it jump! Why not make a couple of them and have races and give them different names. We did this a few years ago.

This would make a wonderful birthday present or rainy day activity. This would be a fun kit for children to work on when they are not feeling well; it can take their mind off their woes or their aches and pains as they imagine their characters come to life.

This could be wonderful for one child to use, or for a group of children to use and come together and create a scene or story as a collective, too.