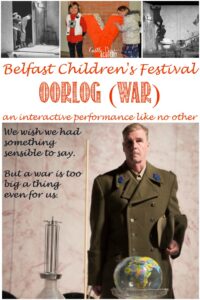 The Belfast Children’s Festival 2019 is underway now, after kicking off the first performance of Oorlog (War) at The MAC last night, following a reception with delegates from around the world, and hosted by Roel Van de Ven, who flew over from the Dutch Embassy in London.  Oorlog is a production unlike any other you may have experienced about the subject of war, and certainly wasn’t what we expected – it was so much better! 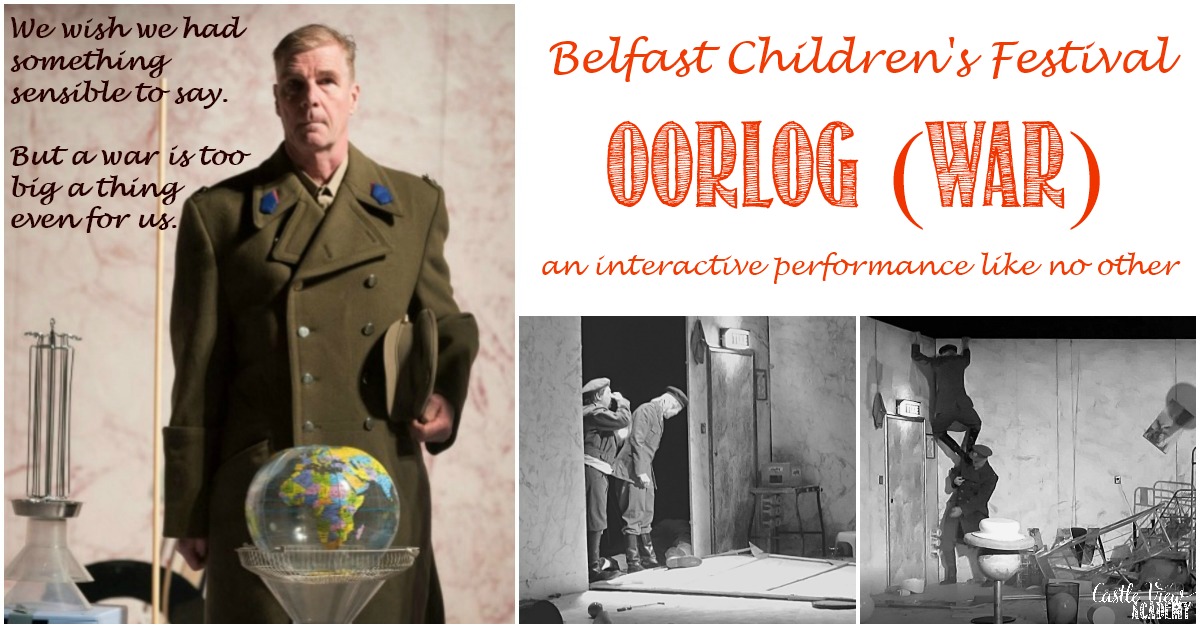 Young At Art kindly provided our family with complimentary tickets to Oorlog.  Phil made arrangements with work so he could leave in time to pick the rest of us up and drive back into Belfast together, stopping for a quick bite along the way.  There was a buzz to the MAC, with photographers and people of all ages mulling about with Young at Art representatives standing out in their bright orange apparel.  I’ll admit that this was my first time to the MAC and it was an impressive building. 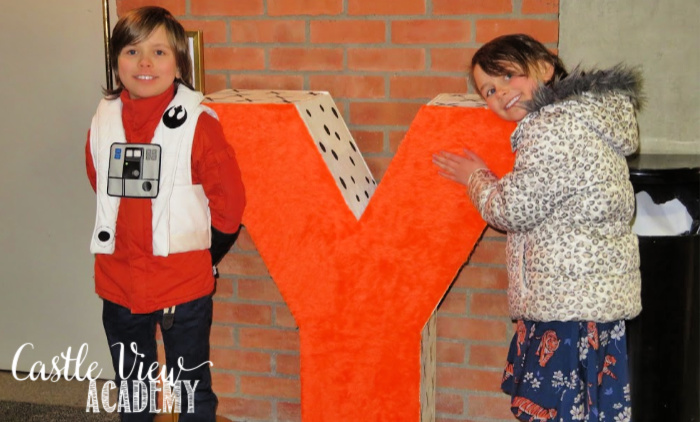 When it was time to file into the theatre, we were met with a stage (uncurtained) and filled with all manner of miscellaneous items.  It reminded me of the opening of Back to The Future and Doc’s crazy alarm clock to feed the dog.

Oorlog is a powerful, 50-minute performance that’s suitable for ages 7 up to adult.

The description for the production by Theater Artemis, from The Netherlands, is:

We would like to say something sensible.
But a war is too big for us too.
We only make a performance.

Something with a balloon that drains, a nose that bleeds, helicopters
falling from a tree, a shower that cries, an audience shooting and
three soldiers on roller skates who talk backwards.

This does seem all very serious a topic for children aged 7 and up….I was a little unsure about it, myself…

Tristan and Kallista were in stitches laughing out loud throughout most of the performance, starting from the beginning when various objects on stage dominoed about and crashed and collided and fell into further disarray before the 3 performers arrived gingerly on stage through the door, very anxious, and wearing ill-fitting, old-fashioned military uniforms.

There were introductions and translations before things started to heat up again. 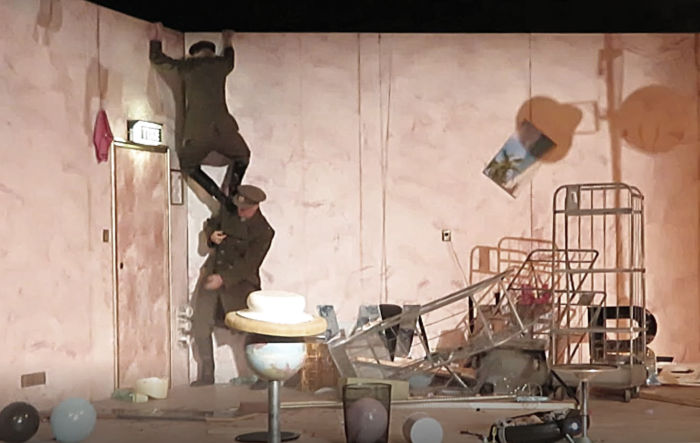 This was a strong visual performance, with little speaking between the performers.  The main narration was given as introductions to different ‘battles.’  For example,

Don’t quote me on the battle numbers themselves, but this was the format used to discern the different aspects of war.

From seeing the actors in their on-stage nervousness as the clambered around the chaos, to hearing some of the battles as they took place off-stage, only seeing flags and beams moving behind the set during conflict, the audience was kept alert and interested at all times, never knowing what was going to happen next.

“I loved it! It’s different from what you’d expect or imagine it. It was actually nice and fun to watch. My favourite part…that’s tough, it was the bird eating the orange, and when they popped the balloon (using a pole through a hole in the wall), and when the guy had his nose bleeding and had the duct tape on (around his whole head).”

The topic was very heavy, the chaos, disorder, and the frightening emotions of war were all very well displayed, but not in way that was frightening to children.  Somehow, the majority of the performance was humorous, thus giving children a safe way to explore the concepts of war. 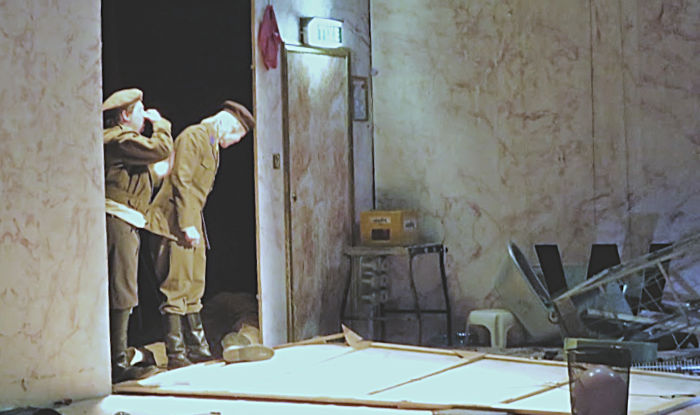 There was also some audience participation by the way of sound effects.  Also…while one actor was trying to teach the children that we are all humans and why can’t we get along, the other two actors started to throw balls at each other, and the audience, too!  First one or two, but then when the audience members threw them back onto the stage in retaliation and defiance, war broke out in the theatre as a basket of balls was brought on stage and a huge war broke out between the performers on stage and the audience members; balls being thrown in every direction!  Total chaos and laughter ensued!

This was an effective way of showing how conflict can escalate quickly, and how war of a larger scale can be compared to how children often bicker and argue with each other.

I’m not sure if Phil was really looking forward to going out to a play last night, but after we left, he was beaming, too, and saying how much he enjoyed it!

Oorlog was a great family night out to a unique and engaging performance by international actors.  It got the cogs rolling in the minds of our children and talks were held on the way back to the car about the effects of war.  A show that leaves you thinking about the past and the future, and ‘Our Place In The World’ (this year’s theme for the festival), is just the way a performance should leave you; thinking about how you can make the world a better place.

« Spring Cleaning & Organising For Homeschool Moms
Spring Is In The Air With The Gardening World Puzzle! »