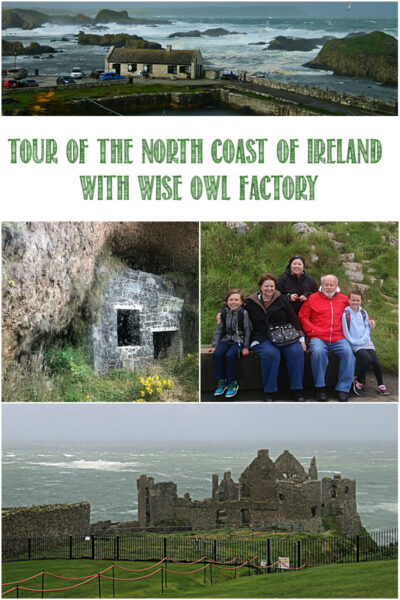 Last month our family had the pleasure of meeting Carolyn (of The Wise Owl Factory), her husband, Gary, and their daughter, Betsy when they flew over to the Emerald Isle.  Carolyn and I have ‘known’ each other for about 8 years through a teaching forum so it was lovely to finally meet her and her family in person.  The children and I joined the Wilhelms on a tour of the famous North Coast of Northern Ireland for a day…an extremely windy day…and this is what we saw (You can read Carolyn’s post of the North Coast tour here, which contains a Northern Ireland A-Z Powerpoint). 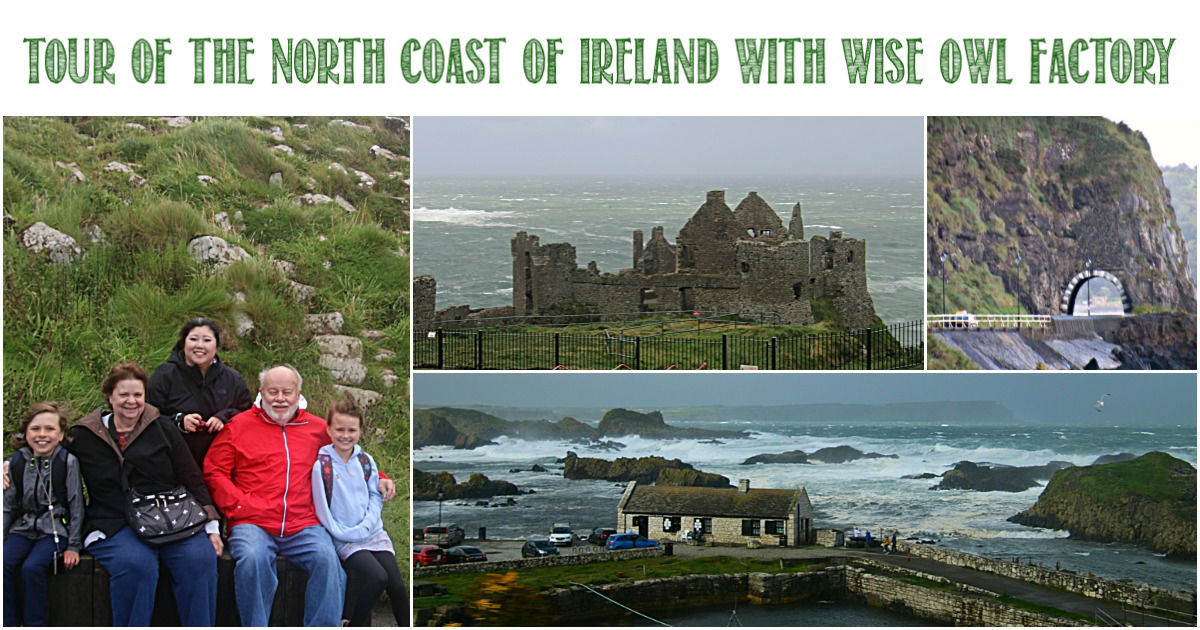 We met Carolyn and her family in Carrickfergus, home of Carrickfergus Castle, built in the Norman times.  Parts of the old town wall are still in place today and give the town some character.  This summer they were busy replacing the roof on the keep, so the main part of the castle was closed to visitors so we didn’t visit, but you can read about our visit there when they were doing an excavation a few years ago. 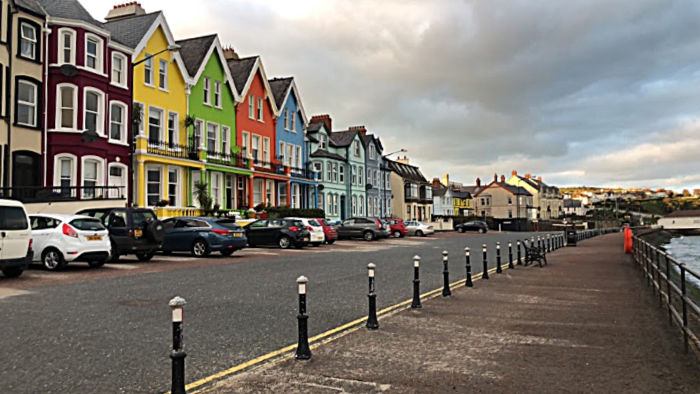 The mini-coach swung past the Victorian village of Whitehead, at the mouth of Belfast Lough, a town that was a popular tourist destination for Victorians from England and Scotland.  As an aside, Sting (of The Police) was a lifeguard in this town for at least one summer during his youth.  Today, the town is home to the annual Victorian Fair, the beautiful Blackhead Path walk, the Blackhead lighthouse, and the Whitehead Railway Museum. 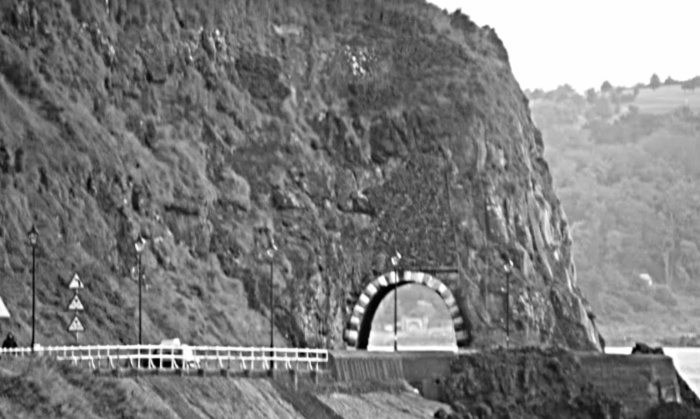 Around past Larne town, where the locals say it rains every day at noon (and in our experience, it’s true)!  Through the Black Arch and on up the stunning coast road where to your left are the Glens of Antrim and on the right, the North Channel of the Irish Sea.  On a clear day you may catch a glimpse of Scotland. 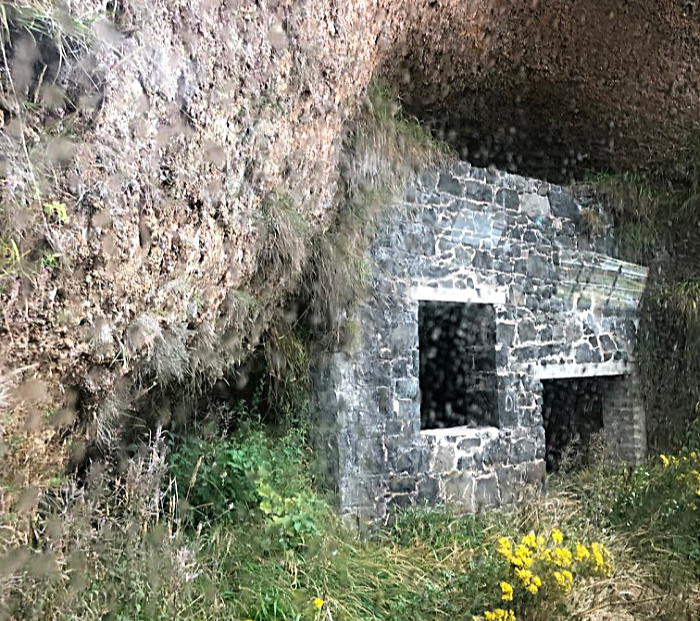 A little further along, near Waterfoot, you come to three caves carved out from the hill, originally used as a hedge school for Catholics when it was illegal to teach the religion during Penal times.  The second cave, referred to as Anne Murray cove, is where a woman lived from the ages of 50-100, making a living selling water (with a free glass of poteen – local moonshine) and doing tasks such as mending fishing nets, etc., for locals.  You can’t say Northern Ireland doesn’t have interesting local histories!

Waterfoot beach was also note]able for being where Peter Wilson’s remains were discovered in 2010.   If you don’t live over here, you may not have heard of The Disappeared, another sad ongoing chapter to The Troubles.

Near Ballycastle is Loughareema, the vanishing lake.  One day the lake will be full and the next day only an empty basin remains.  Strangely, the road runs through the middle of the lake.  I wasn’t sure if the tour guide was just playing us for fools, but when I looked it up on the internet, all signs point to a disappearing lake steeped in folklore and ghosts.

Ballygally Castle hotel is well-known for its hospitality, as well as for its resident ghosts.  If you’d like to meet them, give it a try…if you dare!

Also en-route was Ballintoy Harbour, which is very scenic and frequented by photographers near and far.  It’s also used as a backdrop in Game of Thrones.  While we were there, trying to to be blown away, a GOT tour was also there in costumes…covered over in rain gear.  The waves were very high, even past the breakers.  Tristan held on to me so I wouldn’t blow away to Scotland (haha)! 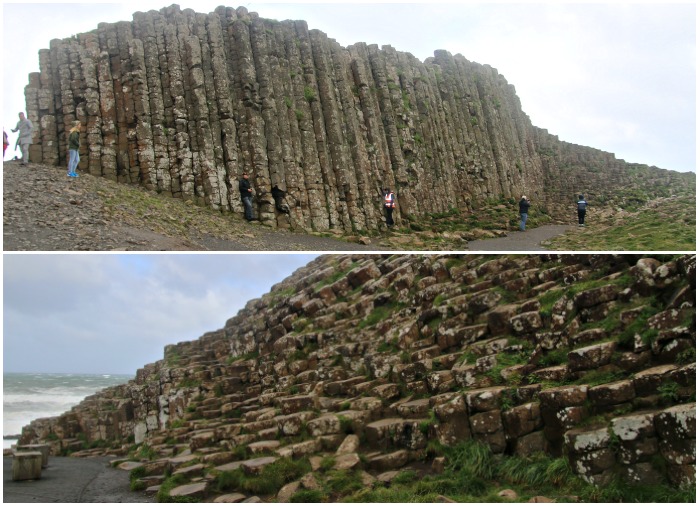 At the Giant’s Causeway, the wind was something else!  I’ve been to the Causeway a few times before, but even in January I’ve never experienced the waves so high.  I’ve heard from many people that you can never have a bad day at the Giant’s Causeway, and I think they’re right!  We weren’t able to go the full length of the shoreline walk because of the fierce wind, and in fact, we were lucky as they shut down the shuttle bus service just after we returned back up because of the high winds.  It was still a good experience, and introduced the Wilhelms to a little taste of Northern Ireland’s stormy season.

We stopped for a quick picture at Dunluce Castle, where the kitchen has fallen into the sea long, long ago.  It’s very picturesque and is a photo stop for tour buses and other vehicles.  Phil and I took Mom here on her first trip to Northern Ireland and we wandered around the ruins on a much sunnier day. 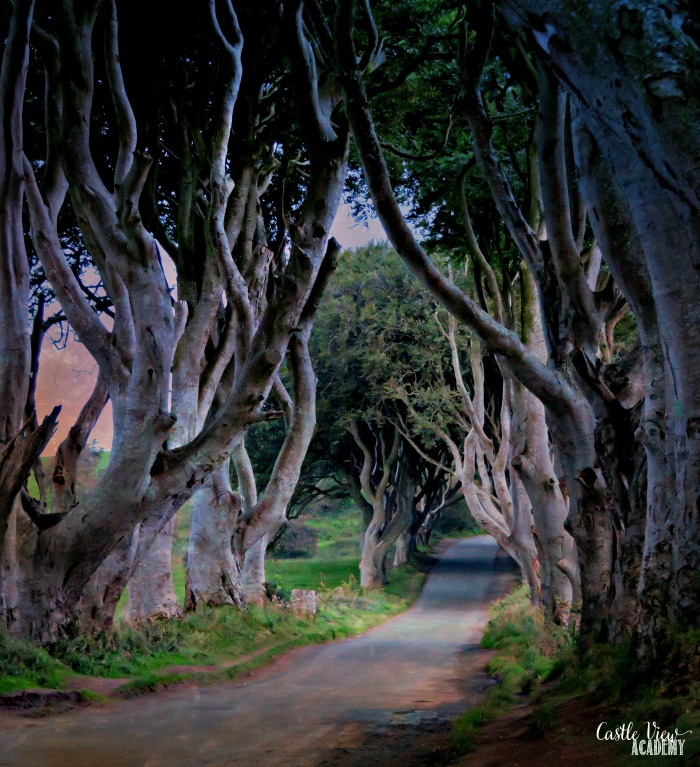 On the way back from the North Coast to Belfast we swung past the Dark Hedges, a very beautiful location that is unfortunately becoming a victim of its own success after being featured in The Game of Thrones as the King’s Road.  This place was on my bucket list since 2003, and I finally made it there last autumn.  There’s also a fun and cute fairy forest with parking facilities just across the road, so if you want to visit, please stop there and make the short walk over. 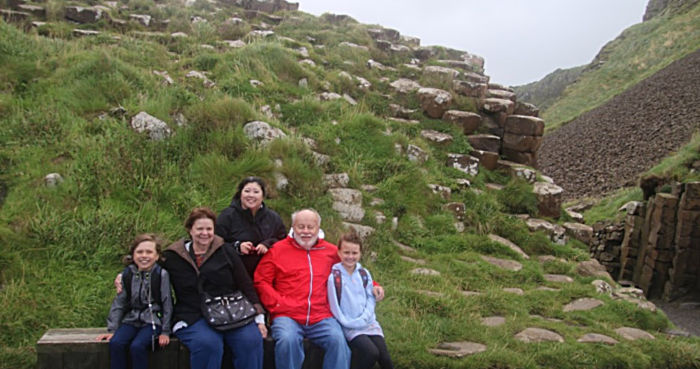 It was a full day with many sights seen and memories made.  If you’re ever in Northern Ireland, a trip up to the North Coast is simply a must-do so be sure to put aside a whole day to do it.

Previous Post: « Gift Ideas For Inquisitive Detectives Of All Ages
Next Post: Toilets From My Travels: From Squat Toilets to a Loo With a View »