How can you and your children feel a part of the community and feel like they are making a difference to their neighbours?  One way to do this is with a neighbourhood clean up. 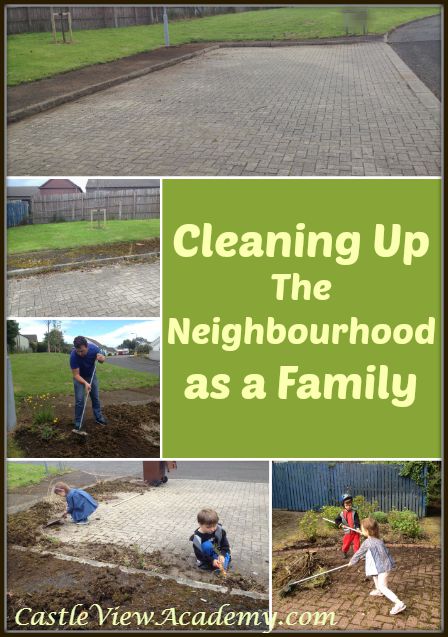 When we moved into our quiet neighbourhood, we were very pleased with how well it was kept.  Unfortunately, it isn’t so tidy anymore.  We understand that most of the residents on our own street are elderly and some are not physically able to to the work themselves.  In other areas around town, some people think that the cleaning should be done by the council or housing executive and that they shouldn’t have to do anything. 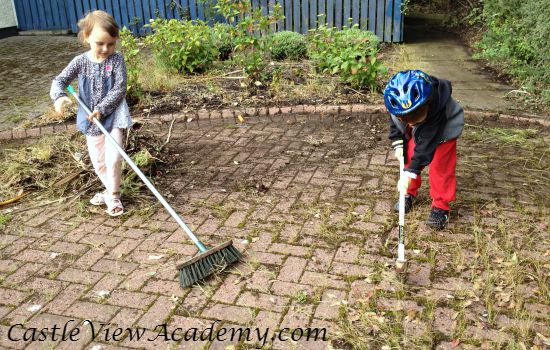 There is one particular spot at the end of our road that collects the dust, dirt, leaves and weeds.  It piles up over time and takes root in the cracks between the bricks on the road.  Moss grows and grass sprouts up knee high.  Over the past few years I’ve tried to get over to this area each summer to give it a good sorting out.  But alas, by the next spring it’s the same thing over again.

Although other areas of the UK are on the way to economic recovery,  our area is still in a state of austerity.  The councils merged this spring and the budgets were further cut.  So now instead of our town’s green spaces being cut 5 times a year, it’s now down to just once a year!

About a month ago we were walking down to the library and we noticed a man mowing a huge area of grass near a playground.  He was bagging up all the grass (when the council cuts it, it’s just left).  On our way home he was just finishing up and we made a point to stop and let him know what a good job he’d done.  The area was at least 6 times the size of his own lawn!  He said that if everyone pitched in a did a little then this would be a lovely estate.  It was once the best-kept large estate in the borough, but it’s definitely not anymore.

READ MORE:   10 Things To Do In Belfast In June With Kids

He gave us the inspiration to move down our immediate road and a few days later while waiting for dinner to finish on the barbecue, I hopped down the road and started working on a small parking lot that had been getting progressively worse.  I made good progress in only about 20 minutes.  The moss was a good inch thick in places! 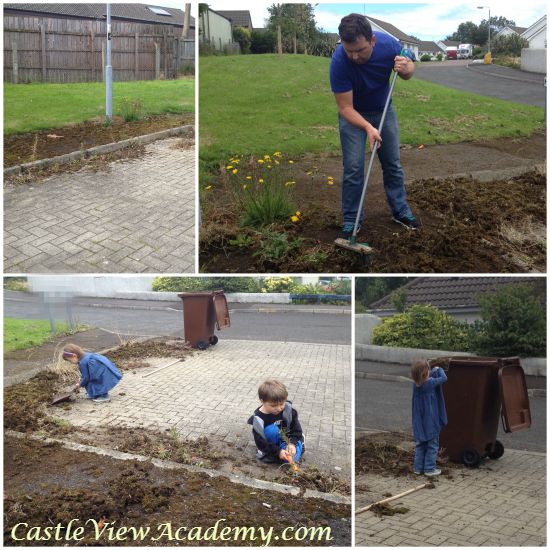 After dinner, I encouraged the rest of the family to walk down and help me.  With all of us working together, it didn’t take too long to scrape, dig, sweep, and make the space look inviting once again.  Our wheely bin was loaded so we had to stop.  In fact, the bin men almost didn’t empty it because it was so heavy!

Now I see many other places that I want to tidy up!  There are two main problems, however.  The cost of the equipment adds up (I’ve already gone through two new weed scrapers), and I’m not sure what to do with the ‘stuff’ we clear.  We can’t keep taking our wheely bin as it gets too heavy and far to drag it.  I will have to look into how to solve this problem before I head too far from home. 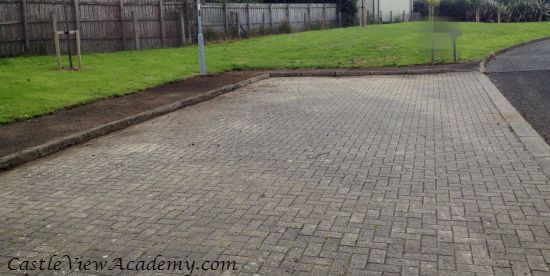 It does give one a sense of satisfaction to walk past and see the hard work that has been done.  A few people stopped and expressed their appreciation, and others must think we’re crazy, but that’s okay.  It’s one of those jobs that isn’t noticed when it’s been done, but it is an eyesore when it isn’t done.  Once an area starts to look unkempt, it soon becomes a place where people think it isn’t cared for.  More rubbish is left, and soon unsociable behaviour finds a home.

We love our little town, and we want to do our part to keep it looking nice.

How do you help your community?  Let’s have a discussion in the comments.