Japanese food is both delicious and gorgeous, and one of the things I miss about Japan is of course, the food.  Even if you can’t eat the seafood, there is still so much variety that you could try something new each day and never run out of options.  There are 2 types of Japanese food, restaurant-style and home-cooking.  My Japanese Table: A Lifetime of Cooking With Friends and Family by Debra Samuels is the latter, and is just what I’ve been looking for. 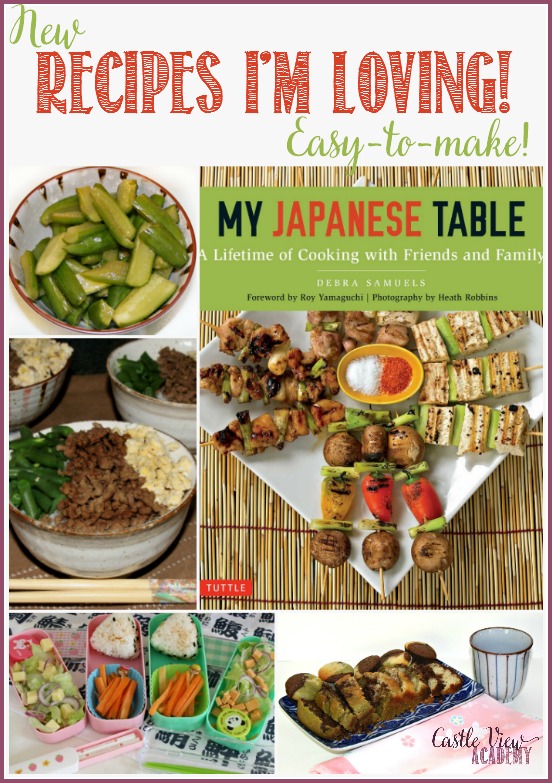 When Tuttle Publishing sent us My Japanese Table to review, I was so happy!  It hasn’t been until the past few years that I’ve really taken to attempting to cook Japanese food (like my yakisoba).  I try it one dish at a time, and usually I try ones I’m already familiar with, so I’m pleased that there are many of these in this cook book!

My Japanese Table is divided into 10 sections 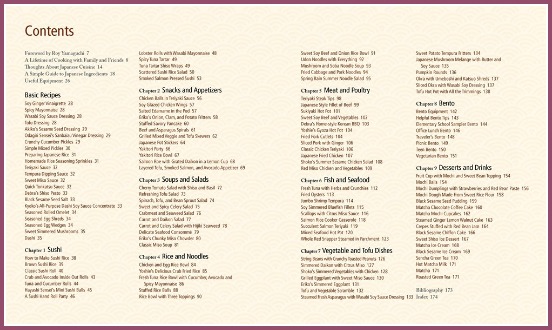 I really enjoyed reading about Debra’s experiences in and out of Japan and how they formed the cooking preferences of her and her family.  The stories and photos of her in markets and with her Japanese cooking class with other moms brought back lots of memories for me.  In fact, I must have spent an hour reminiscing to Phil about my memories which were brought back by seeing the photos and reading the recipes.  Aren’t those the best cookbooks?  Ones that conjure up memories and emotions?

If you’re new to Japanese cooking there’s a guide at the start that introduces you to the ingredients and terms that are used.  The main titles of the recipes are in English, but when there is a Japanese name for the dish, it’s also included below.  This means I’ve now been able to learn the English names for a few dishes, as well as the proper Japanese names for a couple as well.

As I’ve mentioned, there are several of my favourite recipes in here:

Where to start?  I’ve been making some of these myself from recipes I learned in my cooking class, some through various websites and books, and others I’ve attempted after tasting them at a Japan Society Northern Ireland event.  Others I’ve eaten but never made, and so many I haven’t yet had the pleasure of trying at all. 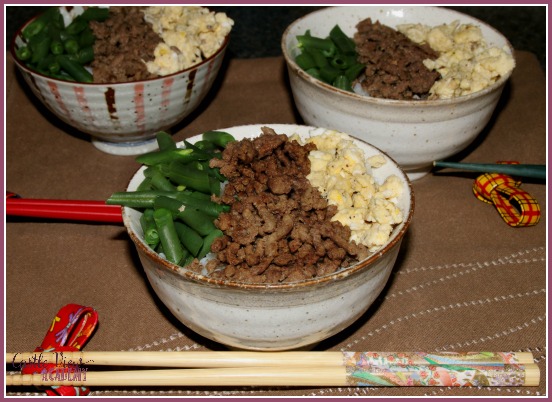 The first recipe that stood out for Kallista was the Rice Bowl With Three Toppings, Oyako Donburi, which Debra says is often a favourite of young children because of its colours.  The ingredients are few, easy to come by, and the recipe very simple, only one pan is needed in addition to the rice pot. 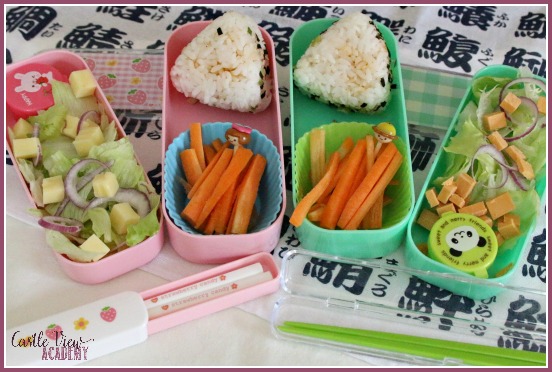 I’ve been on a ‘roll’ of making onigiri (Rice Balls) since Christmas when I receive some handy little triangular moulds that make it easier to create them (previously I was shaping them by hand).  Santa gave us some Japanese rice seasonings for Christmas, so I just had to try making the stuffed version.  These are perfect for picnics and Bento lunches.  My family enjoy onigiri so much that now I usually cook more rice than we’ll need when we have a Japanese dinner so that I can make onigiri for lunch the following day.

The Sweet and Spicy Celery Salad caught my attention and we had the ingredients on-hand.  Refreshing cool celery mixed with the hot spice of togarashi sounded like a good combination.  I’ll tell you the truth that I did try to make this, and it smelled delicious…but I was multi-tasking and preparing the picnic items and I shouldn’t have stepped away from the stove as I burned the salad 🙁  However, I did persevere and made the recipe again, this time with success. 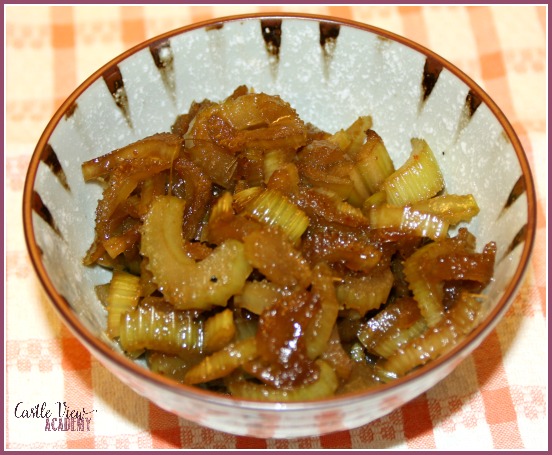 Okonomiyaki was one of the first meals I had after arriving in Toyama  I remember going to the department store across the street with the head teacher, Yoko, and Cari, the other foreign teacher at my school.  We went down into the basement and were greeted with the sights and smells of every type of Japanese food awaiting us!  Yoko wanted to introduce us to Okonomiyaki. 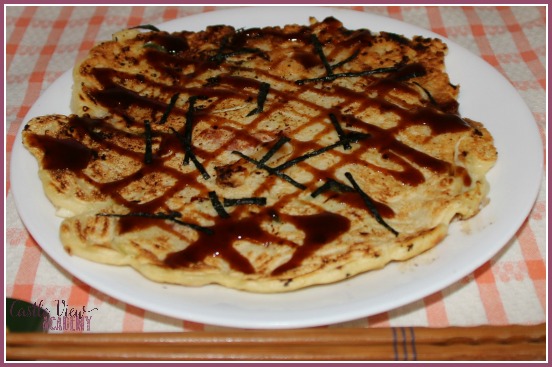 I will admit that I wasn’t an immediate fan (I prefer Hiroshima-style more), but I have made it for my family back in Canada, and my children enjoy it at our Japanese events.  So it was time we tried it ourselves.  The recipe in My Japanese Table is made so much simpler than many other versions I’ve seen!  This was a big hit! I made a double-batch and we all had it for lunch the next day, and it was still delicious. 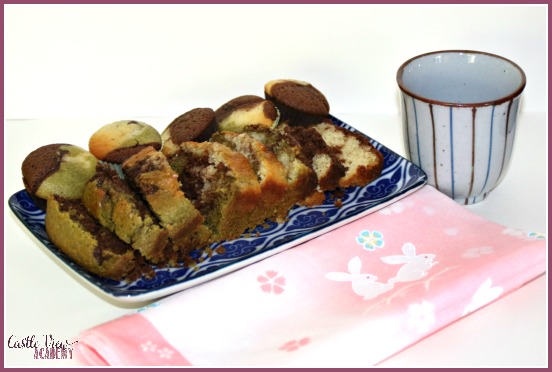 The Matcha Chocolate Coffee Cake was such a wonderful dessert to take with us to the Japan Society Hanami picnic under the blooming cherry blossom tree last weekend.  It received many compliments, I’m happy to report.

What will I be trying next?

I have never tried to make Sukiyaki Hot Pot, so I may try that one for an October birthday.  The textures and richness of it will be good when the coolness of autumn moves in.

The Beef and Asparagus spirals look delicious (and only 5 ingredients are needed). 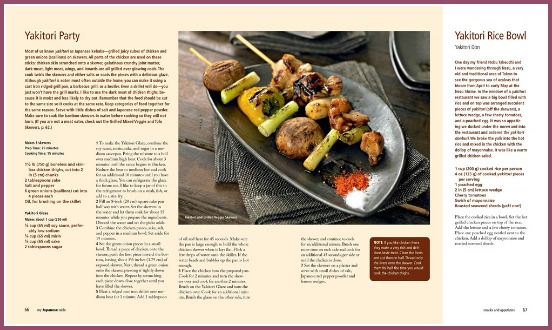 The Cherry Tomato Salad with Shiso and Basil is so colourful and it looks mouth-wateringly good.  The kids will love the colourful variety of cherry tomatoes.

I’m certain Phil would love to take some Teriyaki Meat Loaf to work in his Bento!

The Pumpkin rounds (Kabocha no Chakin) are up on my list as I have a lot of pumpkin in the freezer from last year that hasn’t yet been used.  I do know that it won’t taste quite the same as proper Kabocha, but I haven’t seen it here for a few years. 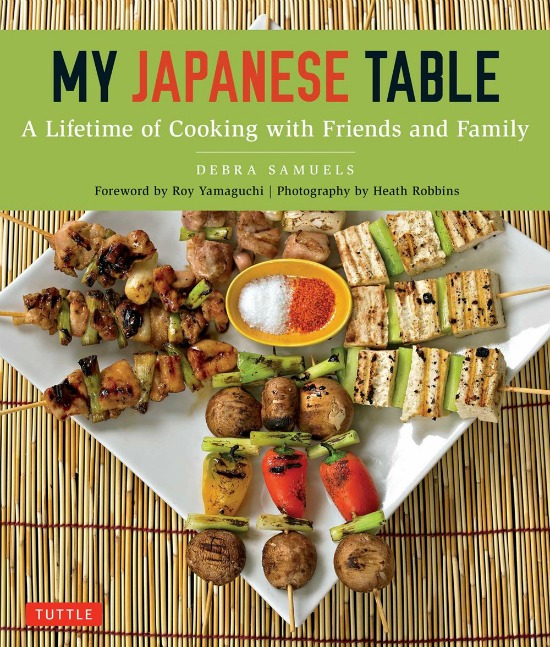 I’m sure you can tell that I’ve fast become a big fan of My Japanese Table and the recipes contained within.  Debra has certainly met her calling and I’m thankful that she’s shared her recipes with the world.