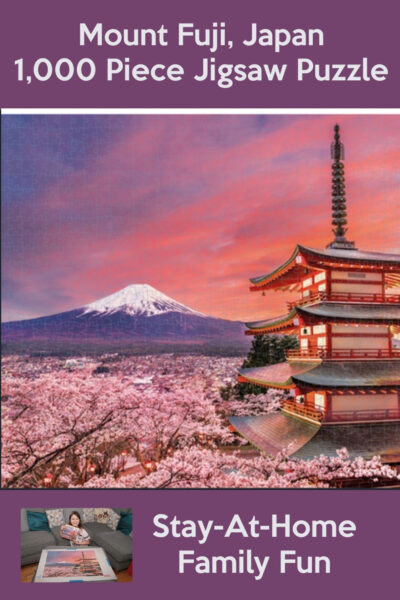 After the past year, it’s time to do a little relaxing. It’s been at least a year and a half since we’ve completed a big puzzle, and we adore this Mount Fuji, Japan 1000-piece jigsaw puzzle.

We received a copy of the Snowcapped Mount Fuji and Chureito Pagoda in Springtime puzzle from Tuttle Publishing in exchange for our honest review.

This puzzle was one of the first 4 that that Tuttle published last year, and we couldn’t wait to get our hands on it! I brought back a few small puzzles from the ¥100 shop from my time in Japan, as well as one larger boxed puzzle…that we will never let our daughter forget…one piece of that one is missing and a couple of other pieces are misshapen after she, as a toddler, managed to be sneaky and somehow chewed them, and presumably swallowed the missing piece while we were all sitting together putting the puzzle together. So we were happy to now have a puzzle that we can complete in full.

Although the first time we put this puzzle together was in December (a good way to keep young minds occupied while they are excited about Christmas and concerned about Santa being able to deliver gifts due to Covid-19 restrictions), we’ll also be moving it into our spring rotation with it’s cheerful atmosphere.

Cherry blossom viewing in Japan is a national necessity every spring, with special maps included on the daily weather updates indicating on which date blossoms should start blooming across the different areas of Japan, working their way from the south of the country on up to the north. My second year there, I was able to experience it twice – once in Takasaki, where I was working at that time, and then again at the very north of the main island of Honshu during Golden Week.

Fuji-san is perhaps the most well-known symbol of Japan to those who have not been there; it’s instantly recognisable, particularly when it’s still snow-capped. In 2013 it was declared a UNESCO World Heritage Site, having it’s uniqueness officially honoured.

Pagodas are unique structures, with alluring architecture. You will find them scattered throughout the country. The 5-storey Chureito Pagoda is at Kawaguchiko, one of the 5 lakes in the district. While looking up where exactly this specific pagoda stands, I have just realised that I have been in this town, and I wrote about it a little in my F is for Fuji-san post. Certainly, if I had known this famous pagoda was so near where I was, I’d have fit in a visit, but alas, I was in town really for only part of a day and spent most of it at Itchiku Kubota Art Museum being amazed by the exquisite kimono and the view across the lake towards Mt. Fuji.

Tristan and Kallista got the ball rolling and sorted out all of the boarder pieces from the inside pieces and put half of the border together while I was preoccupied with other work. Later on we all worked together to finish the frame of the puzzle.

The easiest part of the puzzle and the first part to put together after the frame was Fuji-san, with the mountain’s profile being distinct against the background sky.

From there, the puzzle pieces were divided up into cherry blossoms, pagoda, and sky – pink/orange and purple.

We found that the spire on the top of the pagoda was quite simple. Then we moved onto the mountain’s lower area and the city at its base.

Next in line was Chureito Pagoda. Having several ‘layers’ to it, gave it a little challenge to determine which one was which as the sections were formed and slotted into place.

The blooming trees were next on plan of attack. The lanterns stood out in the lower left, and the pagoda peeking through the blossoms on the right was where this section began.

The last area of the puzzle was the sky, as is often the case with jigsaw puzzles. The top right had already been half-completed as most of those pieces are a little lighter than the rest of the sky, thus helping that area out.

I worked on the upper left dark purple area on evening as Phil and I were watching TV. Then I was stuck and needed a little break while I was caught up in extra virtual assistant work that commanded my attention for a while. During that period, the rest of the family took turns piecing bits together here and there on the rest of the sky.

Then we concentrated on the remaining sky, which was more difficult than we’d expected with the variegated patterns. We finished the puzzle together….almost. As often happens in our busy home where rooms are multi-purposed, a couple of pieces were missing.

Of course, Kallista was teased a little in a loving way about that, but the pieces were found between the sofa cushions while I was out of the room and I missed seeing the big finish, but everyone was happy to see the puzzle completed!

This puzzle gets a thumbs up from the whole family. In a year where we’ve spent all our time together, it’s been nice to have something to do together that didn’t involve work or education. Tuttle has also added several more puzzles to their catalogue, all of which are amazingly beautiful, be sure to check them out!

Previous Post: « How To Buy Your First Home On A Budget
Next Post: Cultural Appropriation or Responsibility of Teaching? »