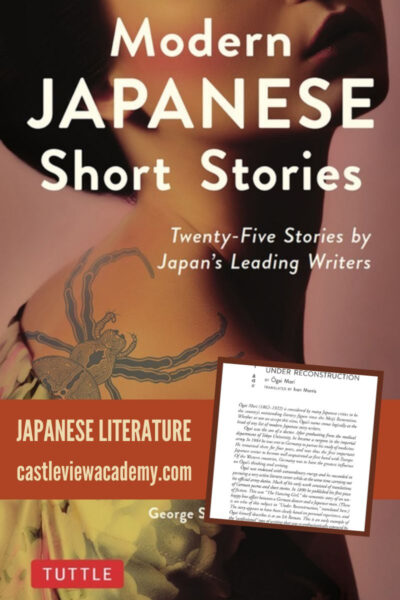 I began to read Modern Japanese Short Stories a wee while ago, but as life tends to do, I became busy and the holidays came and went, but now I am beginning to get things better organised and am finding a little time once again to set aside for my own personal reading – yay! I’ve really missed reading for pleasure, and I’m slowly but surely working my way through my stack of books in my bedside shelves. I’m sure I’ve already read more this year than the previous year (or more). That makes me a happy person!

Thank you to Tuttle Publishing who kindly sent me a copy of Modern Japanese Short Stories: Twenty-Five Stories by Japan’s Leading Writers to read and review.

I do tend to lean toward non-fiction and tales from around the world, however, the stories in this book are fictional ones from Japan, which means I can leave reality behind for a while. Some of them you could clearly imagine happening, while others are definitely the result of the writer’s fantasies, so there is a good mix in them.

I haven’t read the stories in order, but have started with ones I that seemed to either grab my attention, or ones that would fit in the space of time I had available. The first couple of stories I read didn’t quite appeal to me as much as the more recent ones I’ve pursued. However, it might also be that I’ve been more relaxed reading of late than I was last year. Let me summarize a couple of them for you.

Take the ‘modern’ part of the title of this book to be relative – the stories have generally been written at least a century ago. Prior to each story, there is a couple of pages of introduction to the author and their background and the situation during which the story was written. If you enjoy a particular story you can then look for others by the same author by searching for other titles that are provided.

Autumn Mountain, written by Ryunosuke Akatagawa in 1921, takes place in the world of art. One man sees a painting and another man wants desperately to purchase it. Eventually the deal is done and the first man sees it and is unsure it’s the actual piece of art that was in question as it does not hold the magical qualities of the original, but he does not want the owner to lose face and so does not mention it. At the same time, the new owner isn’t as betaken by it as he thinks he should be, but doesn’t let on…

Has the infamous painting of the Autumn Mountain ever actually existed? Or was it just a figment of imagination and built up in the minds’ eye? No one knows…and no one speaks of it. This story reminds me of the Emperor’s New Clothes, and you can sympathise with the characters as we’ve all had purchase regrets – things that seemed amazing at the time, but upon closer inspection at home do not seem the same.

Downtown (Shitamachi) was written by Fumiko Hayashi in 1948. It takes place after the war and the main charachter, Ryo has been waiting for her husband to return from a Siberian prison camp for six years. To try to get by, she sells tea from door to door in Tokyo. One day she happens across a man about her age who allows her to eat her lunch in his work cabin by the fire, out of the cold. She returns again and over a short time he builds a friendship with Ryo and her son. He wants to take care of them, but the next time she returns to visit him she discovers that he has been killed in an unfortunate accident….

This story has love, hope, and tragedy in it. This is one of the stories that I could imagine have taken place in reality. Ryo’s never given up hope that her husband will return, but she is strangely drawn to Tsuruishi. She starts to fall for him, just as tragedy strikes and once again she’s left alone in the cold.

Tattoo, written by Jun’ichiro Tanizaki in 1910, is one of the stories that could only be pure fantasy. A famous tatooist in Kyoto dreams of placing his art on the pure skin of a woman, but knows it will never be. But one day he sees the woman he’s been dreaming of and when she arrives at his studio on an errand he drugs her and tattoos a large spider upon her back while she sleeps. When she awakens she has the spirit of one of his paintings in her, just as they’d previously discussed and the tides turn and he becomes her victim, meeting his fate.

I’ll admit that I found this story somewhat disturbing in the age of consent, but keeping in mind that it was written in a far different time and place, and that the victim gets her immediate, though fleeting revenge (as her life’s work of becoming a geisha is now over due to the tattoo), it does have a sense of justice.

I haven’t read a lot from this period of time previously, so it did take a bit of a mind-shift to get into them. Also, being told from a different point of view and background than what we have here in the west, also needs to be considered.

In between times of reading stories from Modern Japanese Short Stories, I also read The Mad Kyoto Shoe Swapper (read my review here), and that seems to have helped get my mind in the right place after becoming used to the slightly darker style of writing and the often ambiguous endings in the current age, before going back a century and continuing on with this book. I’m now getting much more out of this book. It’s nice to escape our current reality and immerse ourselves in the fictional lives of others!

In addition to the 25 stories, there are also 25 black and white wood block print illustrations included, which are beautiful in their own right. Wood block prints are one of those things that the more you see them, the more you appreciate and love them.

Previous Post: « Keyboarding Without Tears For K-5
Next Post: How Do I Know My kids Are Learning? »