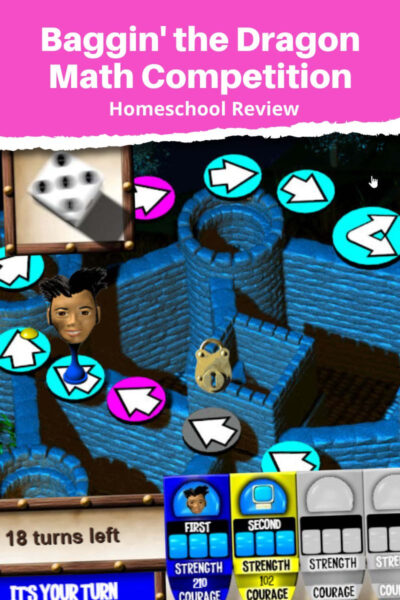 I received this complimentary product through the Homeschool Review Crew.

Over the past 5-6 weeks my children have been having fun practicing their math skills using Baggin’ the Dragon Maths Online by Edalive several times a week, both against the computer, and against each other. As it turns out, the child that was least interested in trying it out is the one that is the most hooked on it now!

What Is Baggin’ The Dragon Math Competition?

Baggin’ the Dragon is an online math competition program for which we were granted 12 months’ access. Children from the ages of 5 to 15 (and up to adult) can play. It has over 10,000 interactive math questions in the following areas:

Edalive is an Australian company, and is aligned with the math curriculums used in Australia, New Zealand, USA, and the UK, and adapts to each player’s abilities. You can see how each player improves over time through the different skills:

Using the different reports available, you can also drill down further into the skills. In this case, the UK key stages generally, but you can go further into each skill for each key stage:

How We Used Baggin’ The Dragon

My children played this online math competition an average of 3 to 4 times a week over the review period, and I played it about once a week as well. We played it on a laptops and a Chromebook. Each player had their own login and password, and I also had a master account from which I could access the student accounts and reports.

Baggin’ the Dragon can be played against the computer, against others who may be online at the same time (most players are in Australia, so keep the time difference in mind), or you can set up a game to play with others you specifically know, which is what we found to be the most fun.

To do this, the host chooses

Then a code is issued, which the invited players enter, and then the game begins.

Each player takes a turn at rolling the die and then all players will answer a math question simultaneously (each player receives a different question depending on their individual skill level which means all ages can play together).

Once a player correctly submits their answer, a timer which begins counting down from sixty seconds, appears on everyone else’s screens and their responses must be submitted within this time frame. In the image above you can see that this question was from adaptive step 16, and each question can be clicked as being too hard. Each player has two chances to answer correctly (with points decreasing after an incorrect answer). Questions get more difficult or more easy depending on how the player does on the previous question.

Players move long the game board and accumulate points that can be spent in shops on different items that can earn them extra points, move them further along the board, or get them out of the stocks (I found that this key didn’t work for me, however), among other items. If players land on a sword of courage they will gain it in exchange for 80 of their accumulated points.

At the end of the game points are tallied for whoever has the most remaining strength, total dice roll over the game, questions answered, and the percentage of questions answered correctly, will get a point for each. After that, the player with the most courage points wins the game!

What Did We Think About This Math Competition?

My 11-year-old daughter was initially the driving force behind wanting to do this review because she enjoyed Edalive’s Math Invaders and Typing Tournament, and my 13-year-old son wasn’t at all interested. However, after just one round of play, my son said he would play it once a day ‘for review purposes’ (said with a slight twinkle in his eye).

By the end of the review period he was also eager to play it with me, even after he’d played it on his own, or he’d volunteer to do another game if I needed more screen shots of the Hero Cards he’d collected:

What could be improved:

Overall, both of my children enjoyed using Baggin’ The Dragon math competition as a supplement to their studies to practice their skills in a more relaxed way. With two years between them, math is one subject they usually do separately, but with this game they can play together but each work on skills that are adapted to their own levels, and I can join in as well, for extra fun. We’ll be keeping this game on their schedules over the next year

Previous Post: « Homeschooling 101: How To Keep Your Children Engaged With Their Education
Next Post: Ancient Greece: A Hands-On Unit Study »