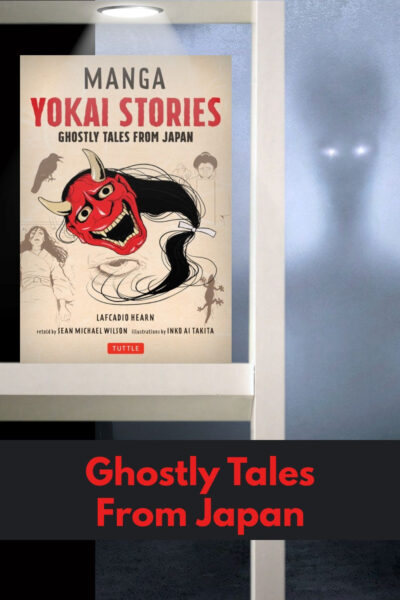 Manga Yokai Stories are stories of Japanese spirits and monsters. The stories said to be written by Lafcadio Hearn around the late 19th century, but the tales have been going on for far longer than Hearn can claim.

Thanks goes out to Tuttle Publishing, who kindly sent us Manga Yokai Stories: Ghostly Tales From Japan in exchange for our honest opinion.

How To Read Manga Yokai Stories

When you open Manga Yokai Stories, you’ll immediately notice something doesn’t go ‘right,’ but is rather ‘left.’ This book is printed in the Japanese manner of starting ‘at the back’ and is read from right to left rather than left to right. It takes a little bit of getting used to, but it doesn’t take long and adds to the authenticity of the experience.

As is noted at the front of the book, not all the stories are composed of horror and gore, but they do all immerse readers in Japanese culture. Although these were told over a century ago to Hearn (and thus even older), they can all also be seen as ‘modern’ as Japan’s environment is still a mix of traditional and futurology; therefore I can picture these stories in the settings of Kyoto, Gokayama, Shikoku, and of course, Kumamoto, where Hearn resided.

The illustrations in Manga Yokai Stories are black and white line drawings with a lot of atmosphere. They depict mostly traditional Japanese architecture and landscape, along with the sense of dread, which was appropriate for the stories. The illustrations by Inko Ai Takita have a sense of emotion and anticipation, as well as peace.

What happens when a wife comes back as a ghost to prevent her husband becoming aware of her adultery? When a man divorces his wife to find success as a samurai? He’d never stopped loving her so what happened upon his return years later? A screen door that bewitches a student until he becomes seriously ill. These are just a couple of the tales told within these covers .

Of all the ghost and horror stories I immersed myself in as a tween/teen, I hadn’t come across these particular themes, even though that was my genre for a few years, so these were new for me.

The stories are adapted from the tales of Lafcadio Hearn, translated and published between 1900 and 1904.

This book was an easy read. Tristan and I read it together, which was quite fun. Of course, it’s good for Halloween, but it’s also interesting at any time of the year.

Manga Yokai Stories is a good read for teens to adults who enjoy a good, ghoulish story. Because the illustrations are in black and white, it might be fun for some readers to colour the images as well. In fact, you could combine this book with other Tuttle titles that teach you to draw manga, such as Drawing Facial Expressions and Drawing Clothing and Accessories, and this could almost become a language arts and drawing course of its own. Move on from there and write your own manga stories, too!

Where to Purchase Manga Yokai Stories