Last week was full of ups and downs.  I was feeling overwhelmed with things that needed to be done in the house, on the blog, at work, and of course with homeschooling.  By Wednesday the kids and I had all been reduced to tears; both of frustration and of love.  It was a week of being reminded that it’s the little things in life that matter and you just never know when something so small as a simple thank you can have such an impact on another. 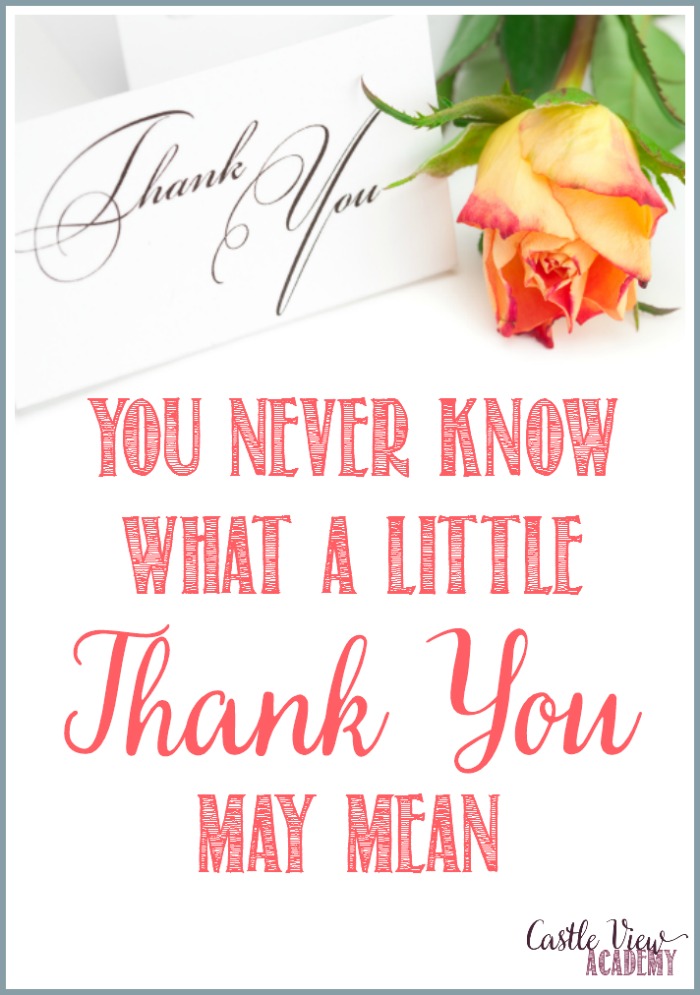 Tristan and Kallista were making thank you cards for the gifts they’d received for Christmas.  Usually they enjoy this, but on this day they were wanting to do something else instead and let me know about it.  I explained to them that other people had taken their time and money and had very carefully thought about just what to give them, so the very least they could do was take a little time to write a nice thank you.

Of course, once this is done, we don’t usually think about it much anymore.  But on this day, after they’d already passed out some of their notes, one of the neighbours who had kindly given the children some art supplies came to our door, holding his thank you notes in his hand (inside the hand-made envelopes covered in drawings), and he said how he very much loved to receive them, and that they had brightened his day.

He told us that his wife was in the hospital and wouldn’t be coming home (we’ve just found out that she has now passed).  He was on his way to see her, and said that he was taking the cards to her.  He said she wouldn’t know he was there, but he still wanted to share them with her.

It was so touching that he came to tell the children he would be sharing their cards with his ill wife.  It really helped them to understand that even small gestures that might not seem very important to them, can have a positive affect on someone else.

Another little lesson we learned was that how it’s nice to smile or say, “Hello” to people you pass on the sidewalk.  It does contradict not talking to strangers; so I see that it can be confusing in the world of rules.  I told my children that sometimes when I’m in a right crummy mood, or have things on my mind like missing home, or an approaching deadline and I’m in my own little world, a stranger’s kind “Hello!” on a dreary day can put a smile on my face and make me feel more positive for their small effort.

So now we try to say “Hello” more frequently and smile as we pass others.  Mostly it’s still just me doing the speaking, but when someone smiles back at the children, they get very happy and have big smiles themselves.  This of course, reinforces the actions and I’m sure before long they’ll be smiling like crazy people as they walk down the road.

Speaking of smiling, I’m positive our garbage and recycling men and woman actually look for my children to be at the window waving to them each week.  One week they weren’t there, and they waved at me!  It’s a sad day when the children wave furiously and don’t receive a wave in return when the usual workers aren’t on duty.  It’s been a routine ever since the kids could pull themselves up at the window sill.  Cleaning up after others is not a nice job, but I hope it’s made a little more pleasant by children who appreciate what they do.

Tristan must have been taking this all on-board during that week.  As the following Monday, which was, well, a bad Monday…I received a special postcard in the mail that Tristan had sent to me.  It read,

I hope you will bee better soon!  You are the best Mommy in the world!

He had sent me one of his special post cards that had his face one the front as a bee keeper, and the caption is,

I love “bee”ing with you

I was very touched that he’d used one of his Post Pal Club post cards for me!

So the next time you’re able, say thank you to someone, even if it’s for something small.  You just never know the difference you might make to their day.