Home » Charity » #LeedsToPoznan – One Man’s Trek for Peace and Humanity

In this big wide wonderful world you just never know who you will meet along the way.  Not long after I arrived in Belfast I met a young man who was taking on the world with enthusiasm, an open mind, and a posh English accent, not to mention a unicylce and a kit of fire juggling batons!  We’ve stayed in touch and I always love to see what he’s been up to.  This is his most recent endeavour and something to be proud of. 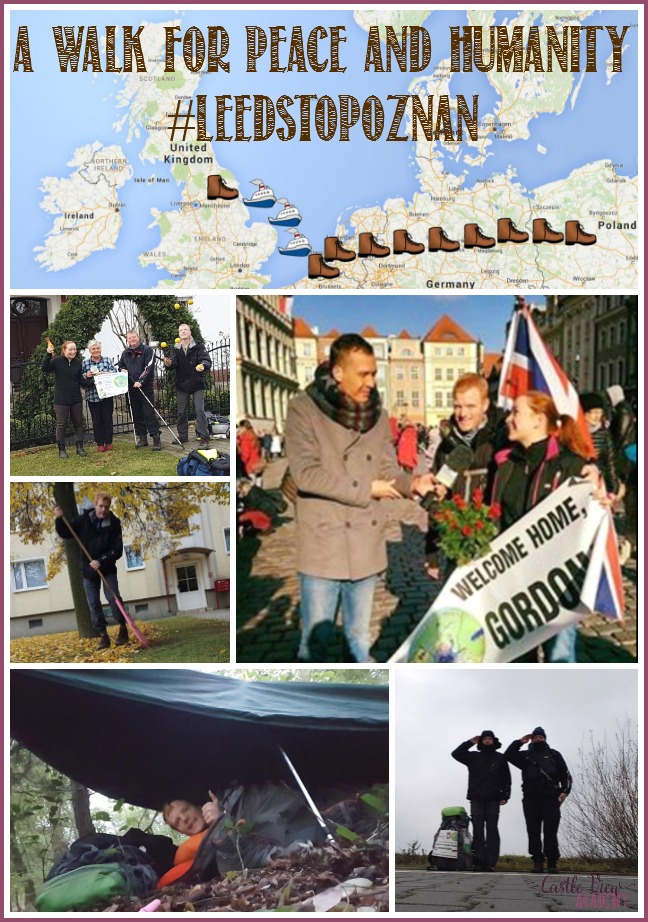 A British/Irish citizen, Gordon Wilson decided to leave a stable teaching career in the UK to go against the flow and emigrate to Poland. Unlike most European migrants, Gordon decided to complete a sponsored walk for The Lions Clubs International Foundation (LCIF) for disaster relief and humanitarian aid across the globe. It was to be a journey titled A Walk for Peace and Humanity: #Leedstopoznan where the entire journey would be made on foot without the help of either wings or wheels. After contacting a few friends he was ready to go with a banner attached to his backpack and armed with his juggling balls, branded stickers and postcards.

Who is this guy?

Gordon met Crystal of Castle View Academy back in 2004 when he was in Belfast to first learn a little about the city and his mother’s homeland and then completed the teacher training at the Queen’s University of Belfast a year later. Since qualifying he then lived in Poland for 4 years as a ‘native speaker’ or EFL teacher and volunteer in the local international school before returning to the UK to work for 5 years as a secondary school teacher in Manchester, 4 being within the special needs environment.

READ MORE:   Travel From Home With The Little Book of Japan

“I really loved the teaching but, unfortunately, it became more and more time consuming as I progressed steadily up the career ladder. Eventually, I found that I no longer attended my social evenings with the climbing club, juggling club and volunteering with Droylsden Lifesaving club.” explained Gordon. “My wife finally pointed out that although we had considerably less income in Poland, our lives were much fuller and we had a very active social life. Moving back would also mean that she would be nearer her family in the event we ever start a family of our own.”

Gordon was also quite busy as he had joined the local Lions club and was a key personality in starting up a youth group: The You Can Leos. This group became a key project of the You Can youth club which this August was recognised with the Queen’s Award for voluntary service.

The move was set and the promotional material was produced. Ela, his wife was now in Poland looking after their new home and Gordon set off on foot with a farewell from Leeds from friends, Lions members and the Lord Mayor. His first 5 days were through England where he followed small footpaths, navigated through angry bulls and camped under bushes. There was a strong UK following and he arrived in hull to a small welcome party with over £1000 raised for the LCIF.

It was in the Netherlands, Germany and Poland that Gordon started to experience amazing hospitality where people, with no prior connection, opened up their homes providing food and shelter as well as making very generous donations.

Gordon also met and interacted with a number of refugees who he describes as “some of the nicest people I have ever met, especially surprising if you think that they have come from war zones and seen nothing but hate and violence for extended periods of time!”. “The vast majority were really making a huge effort to adjust to new cultures and learn new languages.” He continued to explain his view that most people are open and honest and only a tiny minority actually intend to cause any harm. 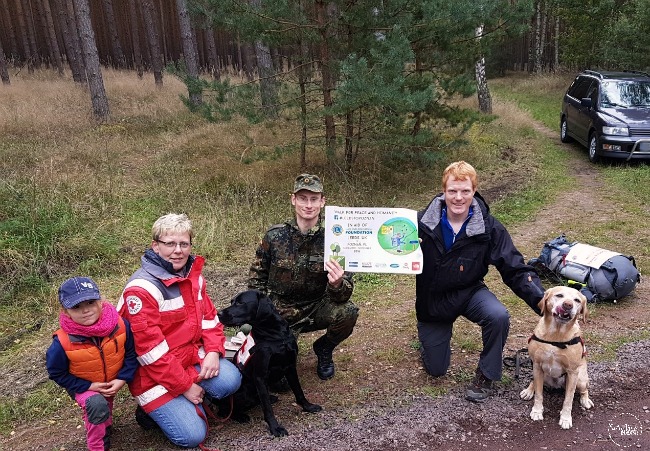 To remain in keeping with the title, and with a little nudge from his little brother, Gordon made the decision to try and do something positive for other people each day. It didn’t matter how large or small – but something every day.

Every task was perhaps something we can all do such as picking up some litter, handing over our lunch to a homeless person or raking leaves and providing company for some of the elderly that were a little lonely.

On arrival, the media in Poznan got quite excited about the distance, amount raised and why a person would want to migrate from the UK to Poland. Gordon had timed his walk to arrive at midday on a Saturday, which in Poznan this is a very special time as thousands gather in the square to watch the legend of the goats shown on the town hall.

A local TV station got wind of the arrival and the arrival was covered live on Polsat a well known channel across the country. This created a wave of interest and there was a media frenzy with many papers, radio stations and TV stations all looking for interviews and photos. So far over £2500 has been raised, of which 100% will be used in projects and relief grants – something that Lions members take very seriously, preferring to cover their own administration costs.

So with a few months saving and a new idea it really is possible to make a difference. We can all start by checking on our elderly neighbours and making sure we make contact with our loved ones on a regular basis!

We are all humans looking for peace. Let’s set a good example and move the world in a positive direction.

You can read more about his walk on Facebook