Home » Culture » South America » Learning about the Matis of the Rainforest 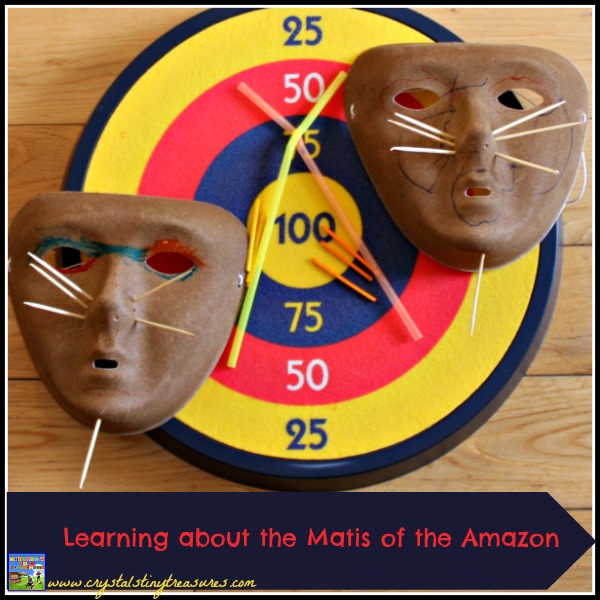 Today we’ll share a little of our Matis experience with you and in the future we’ll share a craft we’ve done.  After reading We’re Roaming the Rainforest as well as all of the further reading at the back of this fun book, we decided to see if we could find out a little more about the Matis of the Amazon. We searched the internet and found some interesting information and video clips about the Matis.

The Matis used to be semi-nomadic, but now live mainly in two locations.  They have become modernised, but still hold onto their history and traditions.  They wear modern clothing, but they also still retain their knowledge in using traditional hunting techniques such as 3.5 meter long blowpipe.

This first project the children did with Daddy while I was out for a morning.  I will admit that these were done before we had read further into the Matis than the book that inspired the project.  Upon further investigation, we discovered the Matis do not like to be revered to as the Jaguar People.  However, I thought I’d share their masks with you anyway, as they are a part of the Matis history, and history is also important. 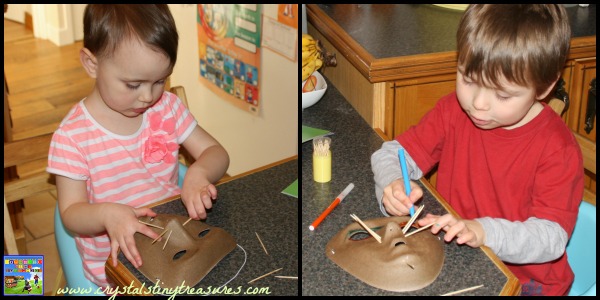 The masks are reminiscent of how the Matis used to make themselves look more like the Jaguar of the Amazon Rainforest.  The toothpicks are sharp on the inside of the masks, but the children had fun making them and telling me all about them when I returned home. 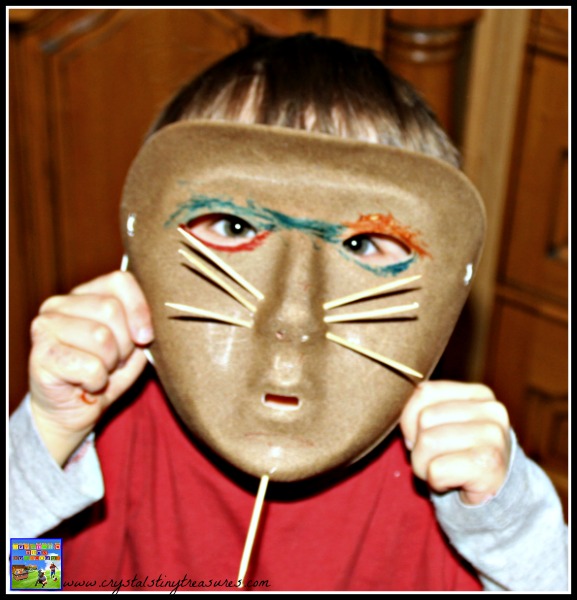 The second activity the children did was making improvised blow pipes.  The Matis use blow pipes for hunting.  They are 3.5m long and very awkward to use and so take a lot of skill to meet their target.

Our children used what we had in the kitchen to make their blow pipes.  They each chose a bendy-straw and 3 colour coordinated kids craft matchsticks. They put the matchstick in the long end of their blow-pipe, and blew through the short side of the straw to fire their dart.

They had fun blowing their darts at an old velcro dart target, and a poor little bunny.  Kallista was by far the leader in this game, but maybe it was only because Kallista had had some fun practice by shooting darts at me, and connecting every time!

This activity also led to further discussions Tristan is learning in his science at the moment about the food chain/web.  He was the predator, what was his prey, and what did his prey eat, and so on down  the line.

We’ve only touched the surface of learning about the people of the Amazon, but for now I think it s enough for a 6-year-old.  But I will continue to answer, or help him find the answer to any questions he has.

Our next project from We’re Roaming in the Rainforest was an egg carton frog.

If you joy helping your child learn about culture, please explore some of  our other posts: