The book of choice this month for my daughter is The Last Kappa of Old Japan: A Magical Journey of Two Friends.  It’s a great bilingual book in English and Japanese by Sunny Seki.  Why is this her favourite?  Let’s find out. 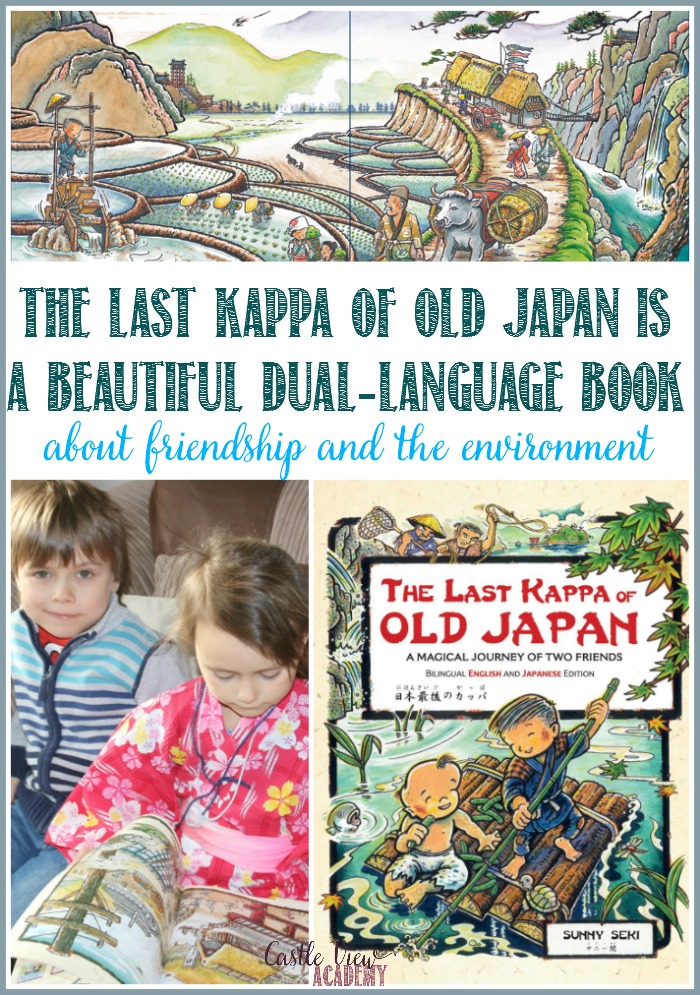 Tuttle Publishing sent us this book along with Vegetarian Sushi Secrets and the two have been good companions ever since.  What’s the connection?  Will you guess?

The illustrations (also by Sunny Seki), show how life in Japan has changed over the centuries.  You can see the modernisation of homes, clothing, and transportation as the story progresses.  I’m not sure of any country that has been so successful in keeping tradition while modernising at the same time, and these pictures show the blend nicely. 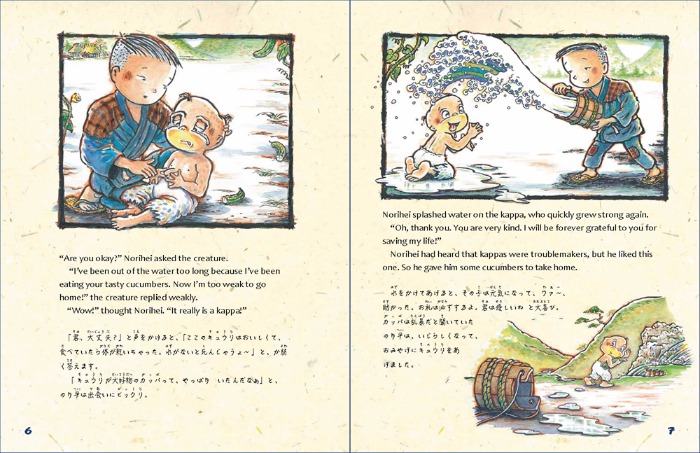 The Last Kappa of Old Japan is a dual-language book, with the English text first on each set of pages, followed by the Japanese text.  This is a nice way for people who are learning Japanese, or indeed, young Japanese-speaking children to learn English.  There are a few kanji characters, but these are ‘translated’ into hiragana above the characters to help those who are not familiar with kanji. Here’s the process I use to understand the kanji:

The Last Kappa of Old Japan (this post contains affiliate links) begins back in Old Japan when Norihei met Kyu (Kyu-chan), a kappa (kappas are mythological creatures; messengers of the god of water who do mysterious things…and eat cucumbers) who was unwell because he had been out of the water too long eating cucumbers.  Norihei helped Kyu back to the water and continued on his way. 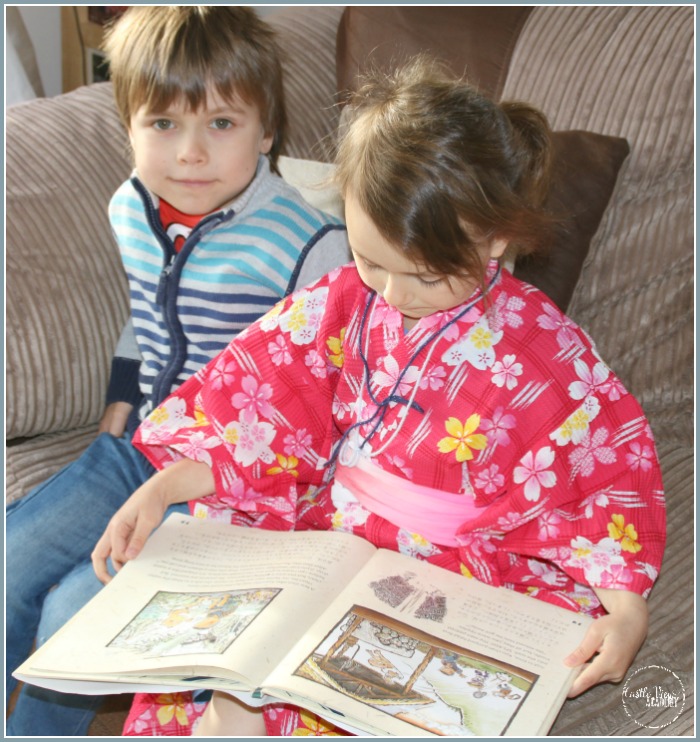 Kyu returned another day and he and Norihei became friends.  Kyu-chan taught Norihei many things about the water world.  Kyu-chan’s family had the job of keeping water clean; but with modernisation, it was getting dangerous to stay in the area and his family had to leave.  Kyu-chan gave Norihei a crystal necklace shaped like a water drop that he could use should he ever need Kyu-chan.

Twenty years passed and Norihei had a wife and a toddler.  One day the toddler fell unseen into the river while Norihei and his wife were working in their restaurant.  No one could find the baby.  Desparate, Norihei remembered about the necklace and threw it into the water and called for Kyu-chan.

Night fell and as hope was fading, there was a knock on the door…it was Kyu-chan with their baby! 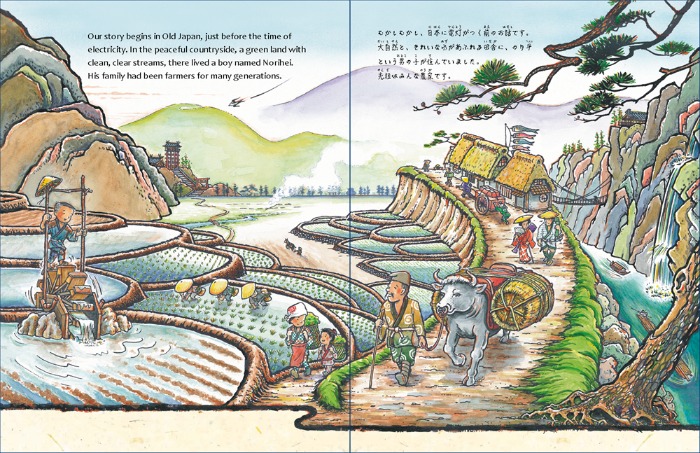 Kyu-chan was looking very old, which happens when the water is polluted; in fact, he was now the last surviving kappa. Who would take care of the water when he was gone?  It is now up to us humans…

Norihei made Kyu-chan his specialty in the restaurant: cucumber sushi rolls!  Norihei named the new sushi after his friend, they’d now be known as Kappa Rolls.

But most people don’t realize that inside every Kappa Roll is wrapped the friendship of two special friends who chose to save each other.

What a wonderful story of friendship and the importance of the environment, all rolled up in one book.

Now can you see the connection between The Last Kappa of Old Japan and Vegetarian Sushi Secrets?  It’s the Kappa roll!  My daughter’s favourite sushi is cucumber, and ever since her first reading of this storybook, she’s been calling cucumber sushi Kappa Rolls, and likes them even more, if that’s possible!

At the end of the book is a page of Cultural Notes for children to learn a little more about some of the things mentioned within the book.  I always like these notes to gain a little deeper understanding. 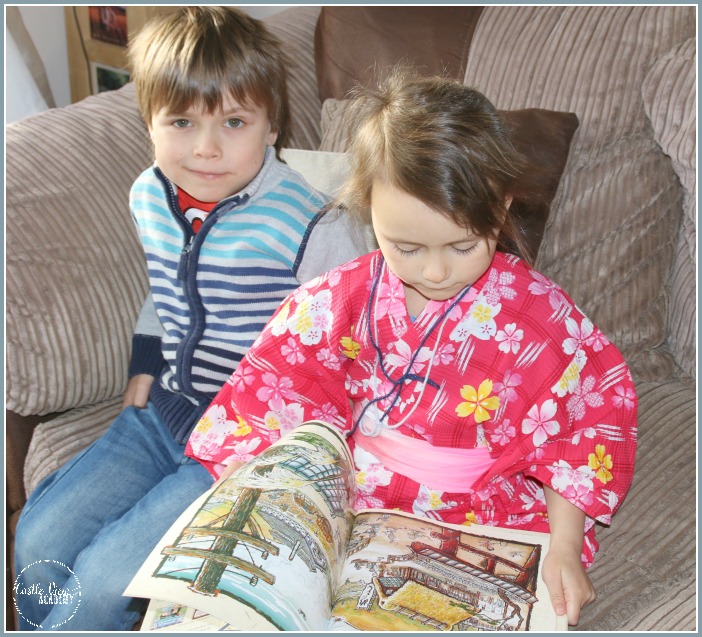 This is a wonderful book filled with interesting illustrations and an important message embedded in a lovely story.  It can be used as a bridge to talking with children about how they can help the water clean, as well as the environment as a whole.

If you’re interested in purchasing this book or other Japanese books we enjoy, here are some Amazon links for your convenience: