Home » Culture » Asian Cultures » The Land Beyond by Leon McCarron 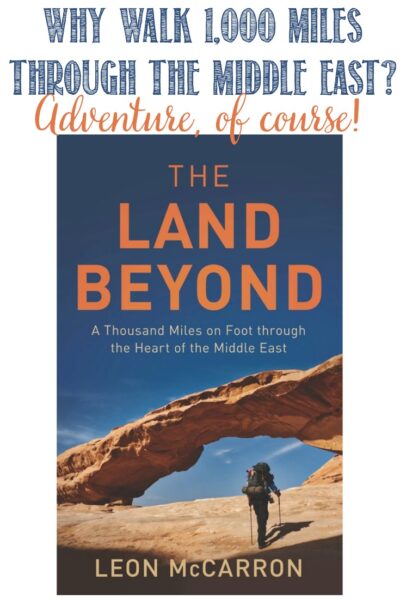 I know that the majority of us are parents and homeschoolers; some of my followers are even road or world schoolers…which is my dream.  In the meantime, until I am able to find a way to make that achievable for us, I often think back to my days of travel and adventure.  I also love to do a little armchair travelling, and the most recent book I’ve finished is The Land Beyond: A Thousand Miles on Foot through the Heart of the Middle East, by Leon McCarron. 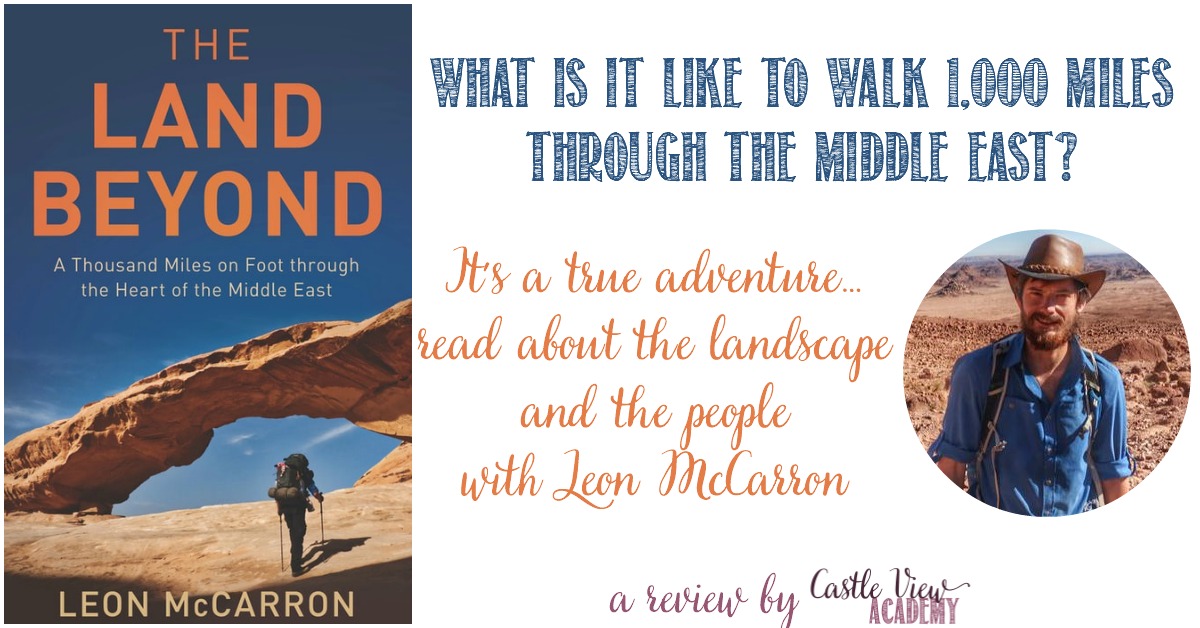 A big thank you goes to Leon himself, for arranging to have his publisher send me two copies of The Land Beyond.  Also, a big apology for the time it has taken me to read this book; it certainly took me about as long to read it as it did for him to walk 1,000 miles!  But in doing so, it really does give an extra element to just how long he was in the Middle East and away from the hubub of Western comforts.  Thinking back to all that we have done in this time; yes, perhaps this may be just the way to read…however, that’s not to say a little binge-reading and devouring this book in a couple of days would be wrong by any means.  In fact, that is how I completed The Land Beyond as I just had to find out more!

I first came to know of Leon when a friend invited me along to hear him speak at Queen’s University,  Belfast at a monthly Royal Geographical Society talk.  He shared parts of his film, Karun: Misadventures on Iran’s Longest River with us, and I was hooked.  I purchased an autographed book, The Road Headed West: A Cycling Adventure Through North America, for Phil’s birthday as Phil had also gone through part of the USA on his own journey before we met.

Leon is from County Antrim, Northern Ireland; in a town not so far from where we’re bringing up our children.  Not a lively place, and where so many people never travel further than a mile from where they were raised except for work, if they must.  It’s an island, in more than just a physical sense, and not a whole lot of people will travel for adventure (or maybe I have the wrong sense of adventure; I don’t consider going to Spain and staying in an all-inclusive resort and only eating British food to be adventurous).  So well done to Leon for branching out and truly exploring the world!

Why would someone want to walk through the Middle East?  Certainly it is dangerous?  But isn’t that just part of the adventure?  I can relate to that as a child of the 80s and my perception of Northern Ireland was shaded by bombs and sectarianism.  Of course, that’s not the whole story, and I have been here and witnessed changes (both for the good and otherwise), and Leon has learned that the people of the West Bank, Jordan, and Palestine, are friendly, generous, helpful, and just trying to get by like the rest of us.  And although there were perhaps a couple of areas where he was more alert, overall he found the West Bank to be very safe for tourists. 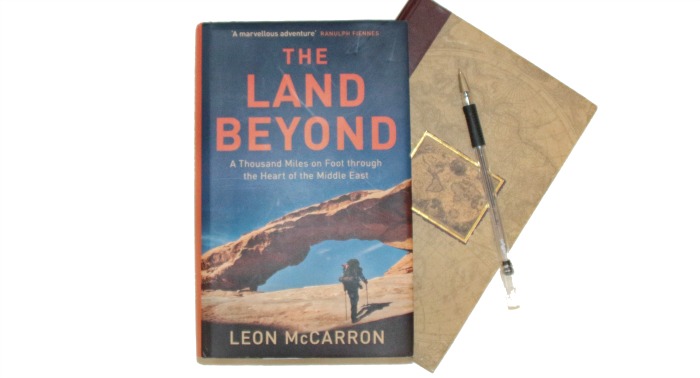 Leon didn’t go on a pilgrimage; he isn’t a follower of any faith, but that doesn’t stop one wanting to learn more about the systems that keep people and governments clashing.  In fact, this belief, or lack of it, can give one a more open mind and ability to interact with people of all faiths.  In The Land Beyond, Leon has local Bedouin hike with him, both to keep him safe, and help him keep on the right track in a couple of areas.  He gently and respectfully gets to know them and through them, the culture and conflicts of the different areas. This human interaction and being able to ‘people watch’ vicariously is one of the things I love about this book.

Times are changing in the Middle East and entire towns are being forced to relocate due to lack of work, infrastructure, or safety (some towns are carved out the rock on hillsides).  The traditional way of life is being lost for the nomadic groups as they are displaced to temporary settlements.  However, when asked where they feel they belong, borders aren’t mentioned, but just rather simply, ‘in the desert.’

“Listen to what Bedouin say, especially the old people. ‘Life is all about memories and connections.  When all of these things are working together, we are doing it right.'”

There’s some humour in the book; like when Arab officials checking out visas were having a laugh at McCarron’s expense, pronouncing his last name as ‘macaroon’ “You are Mr Biscuit, no?”

It wasn’t all lightheartedness, as Leon discovered when he became seriously ill in the desert; drifting in and out of consciousness between bouts of vomiting.  A specialist Bedouin was called for and gave Leon a very painful type of massage therapy, which worked well enough that he was able to continue walking again the next morning.  Musallem (Leon’s trail guide at this point) reacted by stating, “All journeys have their difficult parts. And now you will not get sick again, because you know how painful it is to be treated by a Bedouin!”

It did take me a little while to ‘get into’ this book, simply because being in a part of the world that I (and most people) haven’t been to, and as Leon knew this, it took a little while for him to explain the terms, the places, and a little of the history.  Of course, his book isn’t a history book, so it was just touched on.  However, once the journey is into its own rhythm, both the walking and the writing fall into a comfortable pace and you enjoy experiences along with Leon.

READ MORE:   METEOR! ALIENS IN UNDERPANTS SAVE THE WORLD

Leon’s scenic descriptions of walking through wadis (valleys), and winding his way over cobbled streets through winding roads of ancient cities, really helps bring the landscape to life.  And just when I was thinking that he hadn’t really mentioned any wildlife, he mentioned the lizards that he would occasionally encounter.

To be sure, walking for 1,000 miles takes a long time, and you’d think that one would be glad to make it to the end…or the top, as it was at Mt. Sinai.

But that wasn’t the end of this particular journey; Leon hooked back and travelled to Israel to get a better sense of the area from a different perspective.  This section of the journey takes place in the epilogue; it was a short addendum, but written with more ease and informality and I found it very interesting.  I loved that Leon wanted to experience ‘both sides’ of the area and felt that his journey wouldn’t otherwise be complete.

And if you can’t get enough of Leon, check out his latest film venture; Nowhere is a Place: The Last Explorers On the Rio Santa Cruz.  We all watched this together on family movie night and will keep in touch with what the dam situation is in Patagonia.