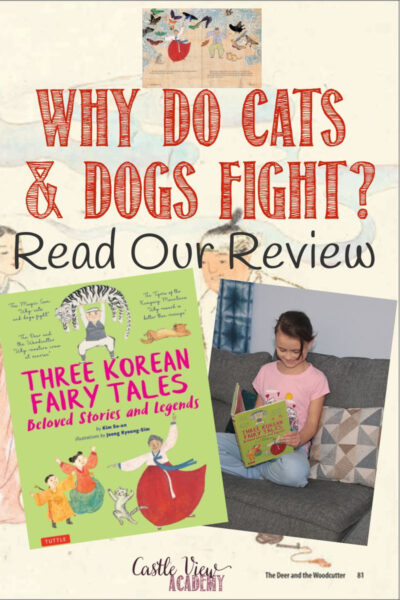 We’re continuing our Korean culture exploration with Three Korean Fairy Tales: Beloved Stories and Legends by Kim So-un. Learn about why cats and dogs fight, why roosters crow at sunrise, and why reward is better than revenge.

We received this book from Tuttle Publishing in exchange for our honest review. We were all quite excited about it, having gone through a Korean culture phase.

The Three Korean Fairy Tales are:

Through these stories you can learn about Korean culture and their rich storytelling history. Storytelling is becoming a lost art, particularly in the Western world and I hope that it’ll be revived as time goes on, before more history and culture is lost.

At the start of the book, it begins with some information on the cultural background of Korean folklore and storytelling, and a little bit more about the tools in the book.

The illustrations by Jeon Kyoung-Sim are done with what looks like water colours and pastels and portray the stories very well. They are soft and remind me of scrolls and works of art. They are indeed very beautiful.

This is the story behind why cats and dogs fight, which is told through a story of a poor fishermen and his wife and how the fishermen threw back a fish to the sea one day. This fish could have fed him and his wife, but when it looked at him he could tell it wanted to be free and so he let it go.

This act of kindness was then played over tenfold and for a time helped the fisherman and his wife’s wealth and status until the greed of others intervened and the tables turned.

The cat and dog worked together to bring the gem back to their owner, but in their lack of communication they ended up in a quarrel that was to last forevermore.

The Tigers of the Kumgang Mountains

This is an interesting tale about a farmer who was killed by a white tiger in the mountains. His son was never able to live up to the the status and the skill of his father in the eyes of his mother.

However, this young marksman wanted to take revenge on this Tiger that had killed his father.  This was going to be no small feat indeed. But he was determined.

When his skills finally met the challenge his mother had set for him to allow him to leave home and seek revenge, he set out into the mountains looking for the elusive tiger.

He happens upon several challenges along the way and he found clever ways to overcome them.

Eventually, he did come upon the tiger and was consumed by it.  Now he had to find a way for himself, as well as another girls, another girl to escape from the depths of the tiger, which took some time and perseverance, and angered the tiger, who did not know what was going on.

In the end the young man did escape from the tiger.  And as tales tend to go, the girl was the king’s daughter…and you can imagine where that led.

Things are not always as they seem and taking revenge on something is not always the best way to go about life for many reasons; some of which can be explored through the story and through further discussion.

The Deer and the Wood Cutter

In this story a woodcutter saves a deer from a hunter and then in turn he is rewarded with a secret of how to have a fairy stay on earth with him and fall in love with him.

Of course, this gift came with a clause; one which the woodcutter did keep for years, but not long enough, and resulted in his being parted from his love.

The story ends with an explanation of why roosters crow in the mornings.

This story has many possibilities for further discussion, including being faithful, keeping promises, and that every action will have consequences be it good or bad.

Three Korean Fairy Tales may not be appropriate for very young children, but older children may enjoy the graphics enough that their attention will be kept and they may become more interested in continuing to read folk tales and other stories that are important for growth and cultural understanding.

Maybe you can discuss or research folk tales from your region, or compare and contrast them with other regions such as Arctic Canada, New Zealand, or Russia. How can these lessons in life from the characters help you learn about our everyday mortal life?