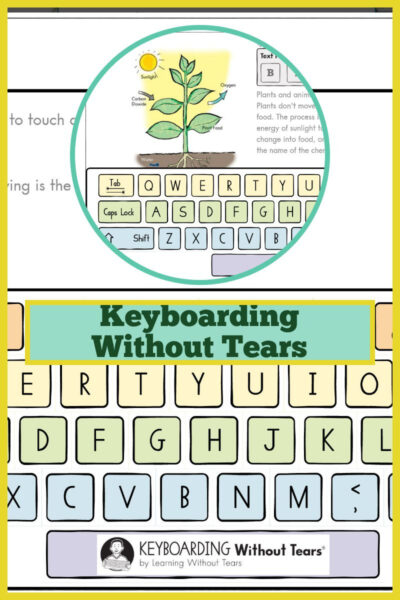 Typing isn’t just a skill needed for the secretary pool anymore, it’s an essential everyday skill in today’s computer-saturated world.  Some of us may have taken a typing class in high school as an elective course because it might come in handy someday, and those of us who didn’t that use the hunt and peck method of typing.  Obviously, touch-typing is the more efficient way to type and the sooner one learns it, the faster it can be applied and other tasks will become quicker as well. Today we’re reviewing Keyboarding Without Tears

I only took two semesters of typing class but the skill has stayed with me and my children think it’s fun to see me looking across the room out of the window as I think and type at the same time.  My husband gets annoyed by it because he’s a hunter and pecker.

My children wanted to learn how to type with more ease like me, so when the opportunity for them to learn with Keyboarding Without Tears, I knew it was going to be something  that they were interested in.  And I was right – they jumped with joy at the thought of learning to touch-type, and I wanted to see if this product’s name lived up to its claim not to cause tears.

My children were each enrolled in the appropriate level for their age/grade and away they went (it’s available for grades K-5).  The hands-on lessons are quick, taking only about five to ten minutes a day.  I will warn you though, even though this is a safe site to use, you may have to keep a close eye on your students.  I wondered why my eight-year-old son was taking so long to complete his typing and math each day.  Finally, I discovered that instead of only doing one lesson of Keyboarding Without Tears each day he was instead completing an entire unit each day!  And not once did he complain.  That’s a bit of lie, actually; there were  arguments and tears when I told him that he was doing too much each day.  I had to show him the manual for him to believe me!

Students may do two lessons a day if they are split between morning and afternoon, but really you want them to have time to absorb what they’ve learned in each lesson and apply it during other times at the keyboard. My six-year-old daughter is especially good at this and she has her hands correctly placed for QWERTY typing almost every time she uses the PC, and she’s trying hard not to look down at her fingers when she types.  My son doesn’t want to make any mistakes so tends to watch his fingers rather than the screen, but he’s becoming better as his confidence is raised with each lesson.

What does a lesson look like?  The children log in using their own special code and complete the day’s assignment.  The assignments aren’t just typing the same letter over and over again with boring repetition.  They incorporate cross-curricular content as well, such as learning about syllables, Dolch sight words, and math sentences amongst many others.

In addition to the physical keyboard skills, there are also off-screen parts to the lessons which are provided in the teacher’s area of the site.  The content differs by grade, but I’m finding that for grades one and three the information is easily used by both of my children.  Because of this, I am taking a little from here and there so they can learn these lessons together.

A good example from grade one of these lessons are printables that show a keyboard and the students color each row of the keyboard a different color.  Below some random keys are shown.  The students then colour that key the same color as they used above, and then print the letter beside the key for extra handwriting practice.  Both of my children enjoyed this exercise.  There’s also a little song that is in this unit about where to keep your fingers on home row, which was so catchy we were all singing it together for a week.

The best series of lessons so far from grade three are about online safety and electronic stranger danger, STOP The Strange.  We’re pretty careful about what we let our children do on the internet but as they’re growing and their need for knowledge increases, they are doing more searches on their own to find out what they need to know for assignments and personal questions.

This unit teaches children what is safe, and when they should stop what they’re doing and go get an adult because something isn’t right.  There’s a difference between a math program asking you what color a balloon is and a pop-up box that is asking for your phone number.  Little did I know how soon this lesson would be applied in real life.

Shortly after this unit, I found myself being trolled and harassed on social media.  It was anything but a fun time.  My children, however, upon hearing one of the posts that had been left on my page (that I was able to repeat in young company) put their hands out in front of them and yelled, “Stop! That’s Strange!”  Which was from their lesson.  I was so proud that they were able to recognise trouble in the real world, recall their lesson, and act appropriately.  The only problem was that in this case I was the parent and responsible for taking the correct actions.

I am seeing weekly improvements in my children’s ability to touch-type (they even want to teach Dad so he can learn), and after a full ten weeks of typing lessons at least five times a week (not including all of those extra lessons mentioned earlier), my children are still very enthusiastic about Keyboarding Without Tears and are already asking about moving up to the next level.

What I think would be nice is if all of the student activities were in one document rather than having to click through the teacher’s guide for each one separately for each lesson.  This would save a lot of time and ensure that nothing was inadvertently missed.

The cost of the keyboarding programs are totally affordable and great value for money for a year’s worth of online and offline lessons, which as we’ve learned are easily applied to everyday life.  This is a program we’re going to continue with as the children grow.

This review first appeared on The Old Schoolhouse© in January, 2017