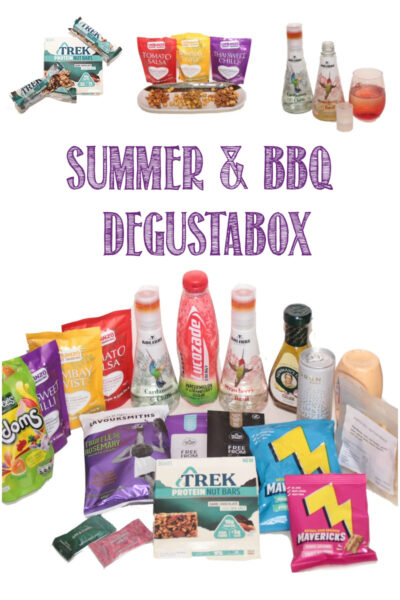 When the children and I arrived back from a month overseas visiting family and friends, our June Summer and BBQ Degustabox had already arrived and was waiting to greet us.  Although we only had a short time frame before we had to be out the door for the kids’ Ju-Jitsu class, there was just enough time to break into the box and grab a quick sneak peak of what we’d be trying out over the next month. 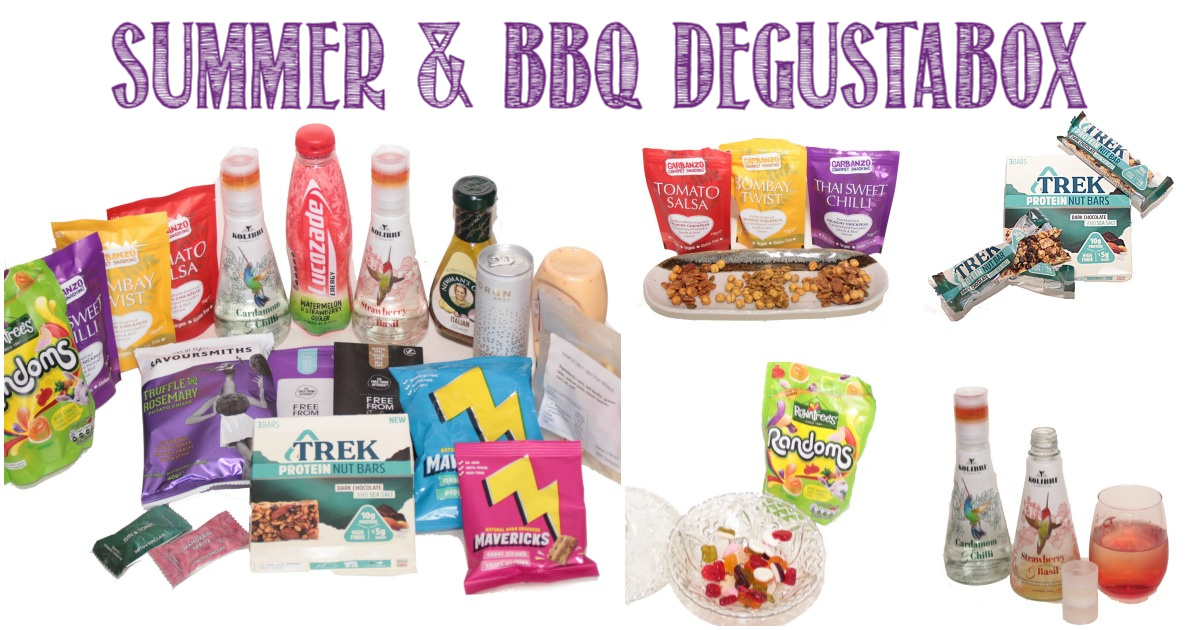 Let’s start with the contents of the Summer & BBQ Degustabox before moving on to our top picks.  Each monthly box contains between 10-15 products; some aren’t yet available in the shops which gives you the first chance to try them out!  The short version of this month’s box is that there are 14 items; 9 snacks, 3 beverages, and 2 meal items.  The long version is…. 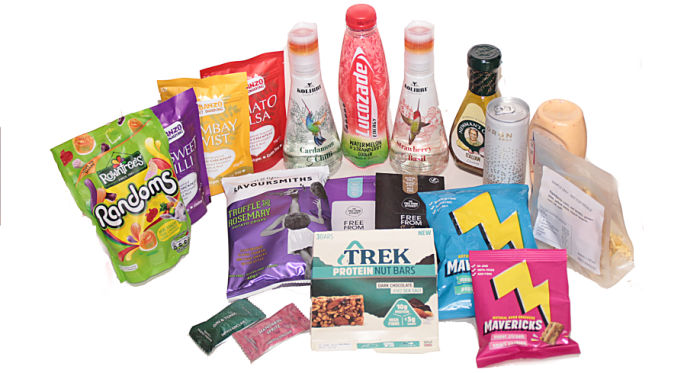 Keep in mind that the contents may vary – so when you order your box your contents may not be exactly the same as mine; as a reviewer I received the items in both the alcoholic and non-alcoholic boxes so we could try them out for you.  Such items this month are:

The Alcoholic Cocktail Gummies by Smith & Sinclair were a fun addition to date night for Phil and I.  Be careful as if you consume 5 you can’t drive!  But we weren’t going anywhere or using heavy equipment, so we were just fine!  The gummies are soft and not too squishy, and melt nicely in the mouth.  At nearly £2 a gummy, I find these awfully expensive, but if I had the means, I would indulge in these from time to time on special occasions.

The G&T was my favourite; it was so very nice – no lingering aftertaste of juniper, which is important for me.  It reminded me of my first G&T in London with a cousin back about ’05 when I was there on a work project.

What was the Mystery product? Lentil, corn, Pea and Black Bean Tortillas were in the box for us.  These were a big hit for me as they were packed full of flavour and so much nicer that plain boring tortillas!  Think rice cake meets popcorn meets tortilla.  They are a little thicker, and perhaps lighter than regular tortillas, but no less satisfying!  Enjoy them out of the bag, or dip them in some salsa, sour cream, or guacamole for added excitement.

We received a box of 3 TREK Dark Chocolate & Sea Salt Protein Nut Bars this month.  They were quite good, and filling, as well.  I found I would only have a bite or two at a time and that was enough to hold me over to the next meal.  The saltiness with the peanuts is a good combination, and the dark chocolate means they aren’t too sweet, either.  We have many outdoor activities coming up later in the month, so I have these tucked into my backpack within easy reach to nibble on while the kids are getting mucky with forest school.

Hellmann’s Chilli Mayonnaise fired by Tabasco was a top pick for my children.  They like mayo in their lunches, and they love the little extra kick that Tabasco gives.  So far, we’ve used this in deviled eggs, tuna fish sandwiches, and pasta salad.

Rowntree’s Randoms Sharing Bag went down a treat with everyone!  I like the ‘clear’ gummies, while the kids like the half and half ones, and Phil had the last word with the solid pieces.  Randoms make a good sharing treat for family movie nights, where everyone can find their favourite flavour.

Phil and I shared the DRGN Turmeric Superdrink for lunch on Saturday afternoon before we began a house cleaning blitz.  The construction isn’t yet done, so it creates a lot of dust and everything is out of order.  We needed a little boost before facing the chaos.  The colour of this drink is quite yellow, which is to be expected with turmeric, and the first aroma that hit me, had me leery, as it wasn’t so pleasing to me.  However, the flavour of the drink itself was quite good, and it didn’t leave an aftertaste.  This is something I would have again in the future, and Phil agrees.

I’m afraid the the Free From Kitchen Co Free From Choc Bar wasn’t a hit for us.  I thought Tristan might like it as he couldn’t have dairy products for a decade and thus was familiar with dairy free chocolate.  However, there was a creaminess that was missing from the bar, and soya doesn’t quite have the same taste.  However, for those who don’t do dairy, this should be a fine choice.

The Free From Kitchen Co Free From Salted Caramel Chocolate Slab was more successful for us.  The children didn’t care for it, but us adults found it quite nice.  I don’t usually appreciate salted caramel, but in this case, it did work.  It’s more of a dark chocolate, so just a little at a time is plenty; there is a toastiness/nuttiness about the flavour, which helps to downplay the sweetness of the caramel.  If you’re a chocoholic and trying to cut down, this might be a good option for you as a little goes a long way.

In your June box you’ll have received one of the three Garbanzo Snacks flavours, but as reviewers we were gifted all three flavours.  These are crunchy snacks that would be great to have while watching a hockey or soccer game.  I love the crunchy chickpeas which remind me of giant corn (at the moment, only the Japanese name is coming to me) more than the pumpkin seeds and caramelised red onions, but that’s what makes these good for sharing as you everyone may like something different.  The Bombay Twist was my favourite flavour. with Thai Sweet Chilli coming in second.  Tomato Salsa was okay, too, but just didn’t quite have the same zing as the other two.  Phil had this display gone in quick time when I was out of the room so it’s a thumbs up for him.

If you didn’t have the alcoholic gummies in your box, then you will have received SavourSmiths Truffle and Rosemary crisps.  I love the crunch of these, and was surprised by the taste.  I’m not a truffle fan, but this is a light taste so it was good for me…and all I had was a single crisp and when I turned around they were gone – so someone must have taken a liking to them!

The Kolibri botanical Drinks were quite nice; I preferred the Cardamom & Chilli flavour, while Phil preferred the Strawberry & Basil.   They are sparkling drinks that you pour into a glass, then you press out the liquid flavoured sweetener from the caps, adjusting to your taste.  It’s a bit of a novel drink.  I will say that definitely only add the sweetener after you have poured the drink, otherwise you could end up with it fizzing up like a fountain and down off the table…but that was fun for the kids to watch 😉

There you have it!  The full run-down of the June Degustabox  – the ups and downs and in-betweens.  Have you tried a Degustabox yet?  Give it a whirl and see what delights are in the next box!