There was a lot happening over the summer in a short space of time and some things were left behind.  This is one of those things.  The Queen’s 60th Jubilee is this year and there have been celebrations around the world, and here in the United Kingdom, there have been street parties, national holidays, and celebrations of all descriptions.  Northern Ireland is a little bit of a sensitive country when it comes to things like this, but there was also a great deal to celebrate.

Our village had been chosen as one of the official sites across the UK to light a Jubilee Beacon.  Every Beacon was lit at the same time during the televised concert that was taking place outside Buckingham Palace.  Tristan really wanted to go see it, but he had fallen asleep and when I tried to wake him, he just wasn’t able to get up, so I took some photos for him.

The day Phil’s mom was having a street party at her place of work, the rain came down all day and the festivities had to be moved indoors.  It was a bit overwhelming for our two shy ones, but they do enjoy people-watching, like me.

Her Majesty, The Queen and the Duke of Edinburough came over for a two day visit at the end of June.  For the first time in decades, a royal visit was announced two weeks ahead of time.  Usually one doesn’t hear of visits until they are completed due to security reasons.  Although Northern Ireland is a safe place to be (otherwise I wouldn’t have traveled here initially, and I certainly wouldn’t have stayed 9 years-Yikes, has it really been that long, already?) there are still occassions when things heat up and there are certain areas that I would stay away from.  So this announcement in itself was something to celebrate. 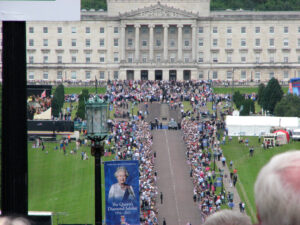 A week before the Jubilee Party that had been announced, free tickets were finally made available to the public.  I took a chance and managed to secure us some tickets.  This was amazing as they were sold out in less than six minutes and I wasn’t expecting to be so lucky.  So the next week we were on our way to see the Queen. 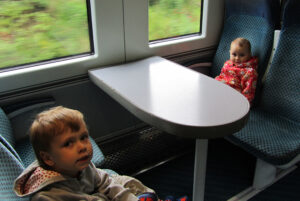 The children enjoyed the train ride into Belfast, but Kallista fell asleep during the bus ride to Stormont Estate (the Northern Ireland Parliament Buildings).  I’d never been here before, and it was an impressive sight.

We had a long while yet to wait so we found a bit of grass near to the road and layed out a picnic blanket and ejoyed our lunch.  Keeping with the Commonwealth theme, we had maple leaf-shaped quesadillas. 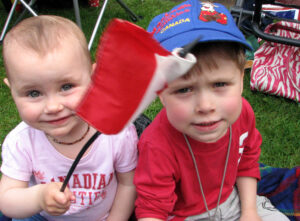 The children enjoyed waving their Canadian flags while we were waiting. 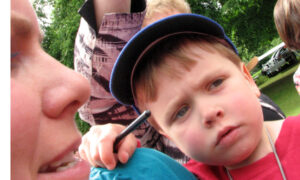 It was a long wait, and we couldn’t quite get to the front, but I took turns holding the children up to watch the armoured car pass by.  It was over all too quick….That’s HRH, The Queen in Green.

But in between the spurts of rain, we were able to enjoy a snack.  Grandma’s Thimble Cookies looked like crowns and tasted great.  Look for the recipe on Friday. 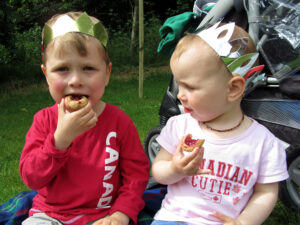 While we enjoyed those little gems, we listened to some music.

And we had a wander around and saw some rare-breed animals.  Tristan quite liked the shy pig.

Then the rain began to come down again and the kids were tired so we decided to begin the 3 hour journey back home again.  Luckily the rain wasn’t too bad during the day as that night the area surrounding Stormont had great floods.

Leaving the bus depot in Belfast and heading towards the train, I thought I saw someone who looked familiar so we caught up and said hello.  It was Dion, Tristan’s favourite nurse when he was in the Neo-natal unit of the hospital he spent his first 6.5 weeks of life in (managing so well with her care, he left 5 weeks before his due date!).  Dion was just about to begin her maternity leave at that time, and she had her beautiful little girl with her now.  It was so nice to see her again and to let her see how Tristan is doing now as a big brother.  A good ending to a good day!