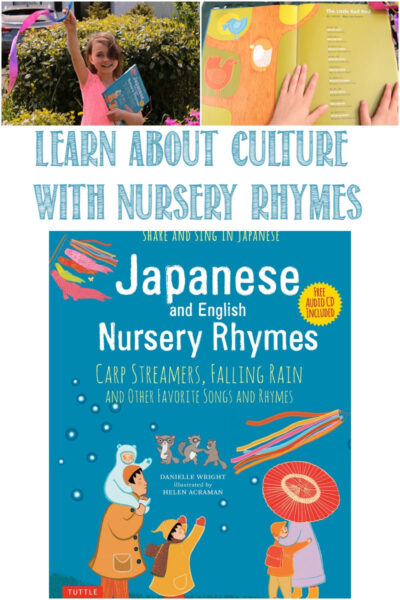 Japanese and English Nursery Rhymes: Carp Streamers, Falling Rain, and Other Favorite Songs and Rhymes by Danielle Wright and illustrated by Hellen Acraman is a cute and fun book (with free audio CD included) for young children.

Thank you to Tuttle Publishing for sending us a copy of Japanese and English Nursery Rhymes to enjoy and review.  In addition to the book and audio CD, it also includes additional bonus material that may be downloaded by using the link within the book.

At the beginning of the book there is a brief Japanese pronunciation guide to help get you going, as well as an introduction.  The illustrations are bright, bold and clear and will certainly appeal to young children.

Kallista really loves music and she will dance to anything; she really loved listening to these nursery rhymes!  I like the songs, which are obviously very different from the western style, being performed as they would be in Japan.  Hearing music of various genres helps children’s mind to grow.

The musical style isn’t in the form of J-Pop, but in a traditional style that may not appeal to everyone.  However, keep an open mind and know that variety is the spice of life and children will enjoy almost anything!  I probably wouldn’t have enjoyed it previously, but having lived in Japan and learned about traditional instruments, I appreciate the style.

Being able to learn these rhymes in Japanese will make children feel accomplished and let them have some fun. That may even become a bit of a secret language, if they are able to do it and other family members and friends don’t know what they are saying!

The children can learn the songs in Japanese and then learn the translations and the meaning behind the songs. That will give them a knowledge so when they hear someone speak or sing in a way that isn’t familiar to them, they will know it is to be respected. Also, they can  learn a new appreciation of music.

Through music and language children will learn about Japanese culture and the country.  I did this a little myself in Japan by taking a song by one of my favourite bands and taking the lyrics and with some help, changing them into romaji and English. I could sing along, and then learning the translations behind the song and it still remains one of my favourite Japanese songs from my time there.

We also did this in French class and through that I developed a love of a couple of particular singers.  You are never too young or too old to try new things!

This book would be great for preschools, childminders, welcome centres, and younger years classrooms.  Perhaps if there are children from more than one or two countries in the class, you could even have parents bring in some fairy tales, songs, or nursery rhymes from their own cultures and the children can learn a new one each month and have a whole repertoire at the end of the year for the end of your recital. Wouldn’t that be just spectacular and wonderfully including!

If you’re interested in purchasing Japanese and English Nursery Rhymes, it’s available through: