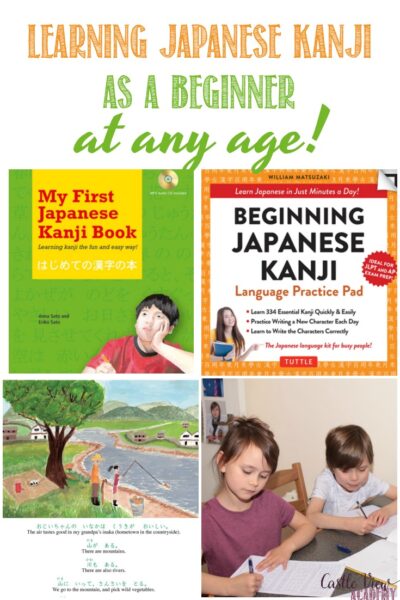 Japanese Kanji are fascinating to the ‘outside’ world; how can anyone remember them all?  After all, there are thousands and thousands of them!  And when you add in the additional three alphabets used in Japanese (Hiragana, katakana, and Romanji), and perhaps all used within the same sentence- wow!  The kids and I are learning to ‘crack the code’ with two fun products from Tuttle Publishing: My First Japanese Kanji Book and Beginning Japanese Kanji Language Practice Pad.

Did you know that in Japan, children are expected to know 1,000 kanji by the end of grade 6?  And we thought 26 English letters were difficult back then.  I thought it would be fun for the children to learn some kanji at the same time as me.  Thanks to Tuttle Publishing who provided us with our study books.

Learning how each kanji came to originate is interesting, and these books don’t specifically teach that, but you can certainly intuit how some kanji came to be formed; it makes for a fun game!

My First Japanese Kanji Book assumes you already know hiragana and katakana, so it was a little more challenging for my children, and I’ve become a little rusty at it, but it’s coming back (there are charts in the back of the book for this, too).  However, Tristan likes to think of Japanese as ‘cracking the code’ for the kanji characters, and this is a good way to approach it!

There are 36 lessons in this book, which is enough to really keep your children learning.  Most of the lessons are two pages long, so quite reasonable and not too intimidating.  There are 2-3 kanji to learn in each lesson.  There are practice squares on the page, but I printed out some Japanese-style squared paper so Tristan and Kallista could practice as many times as they needed/wanted, and I could practice along with them, too.

Each kanji gives the English meanings and pronunciations, as well as a couple of other words that use the kanji within them, which expands the vocabulary and allows children to see them in more than one way.  The hiragana is also provided above the new kanji words to help pronunciation.

Each kanji character must be drawn in a particular order, and these are shown with numbers and red stroke lines in the practice area.

Now that you’re familiar with the new kanji of the day, it’s time for a little fun and kanji in situ.  Each lesson comes with a dual-language poem.  The Japanese is written mostly in hiragana, with the target kanji in – well – kanji, of course.  There is a CD included with mp3 tracks so you can practice the kanji vocabulary and listen to the poems, practice, and repeat.

Although by grade 6, children in Japan will know 1,000 kanji, by the time you finish this book, you will be familiar with 109; that’s pretty cool for one book!

I have used a few phrases from My First Japanese Kanji Book in a letter I sent to a friend in Japan, and she replied saying that her children were impressed!  Perhaps they might not be so impressed if they found out it was from a children’s book – but everyone has to start somewhere, isn’t that right?

Now that the kids are learning some kanji, it’s time for me to get into it, too!  I’ve been practicing with the Beginning Japanese Kanji Language Practice Pad.  In this compact pad, there are 334 kanji to learn, as well as 1,000 frequently used words that contain those characters.

I went to a Japanese calligraphy workshop in August and realised just how poor my calligraphy is.  Each character must be formed in an exact way with rules to the stroke order and direction – you can tell if it’s been done wrong!  Kanji are formed in a different order than English letters and it really is like learning a new skill in addition to the language itself.

Rather than carry the pad with me, I tended to take a few sheets out of the block and pop them in my backpack so they’d be handy.  I often used them/practiced while I was at the dojo while Tristan and Kallista were at their Ju-Jitsu training…it seemed appropriate that we both immersed ourselves in Japanese culture at the same time.

You can, of course, leave them all tidy on the block, but I have also hung them up on the kitchen wall to help me with retention.

On the front of the sheets it shows the target kanji as well as the (several) meanings and pronunciation.  Then there are compound words or short phrases given that use the target character as well.  Helpfully, the radical is also given.  The instructions are given on how to construct the kanji and there is room to practice.

The new kanji character is finally used in a full sentence as well, and on the back of the sheet is more space to practice the kanji on its own, as well as room to write the sentence in full a few times, too, as you can see it the page at the top of the wall.

I would have loved this while I was living and working in Japan; it would have been perfect for me to start my day off with a new kanji character and then practice it during lunch!  However, it is never too late to learn a new skill, and it’s even more fun when you can learn alongside your children!