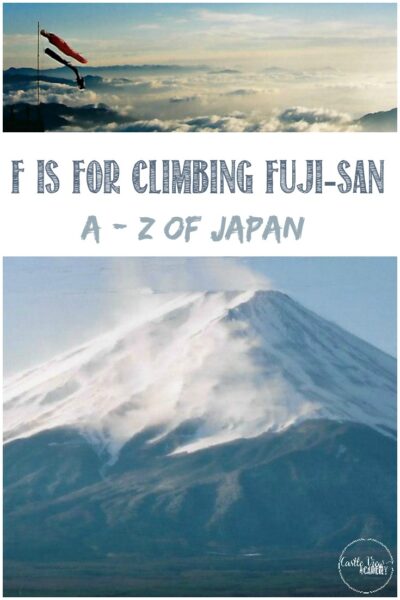 Today in our A-Z of Japan, I’m going to focus on Fuji-san, perhaps the most famous icon of Japan.   If you’ve missed any of my previous rambles through Japan, have a look through them.  Last time I talked about Eki, or the Japanese train stations. 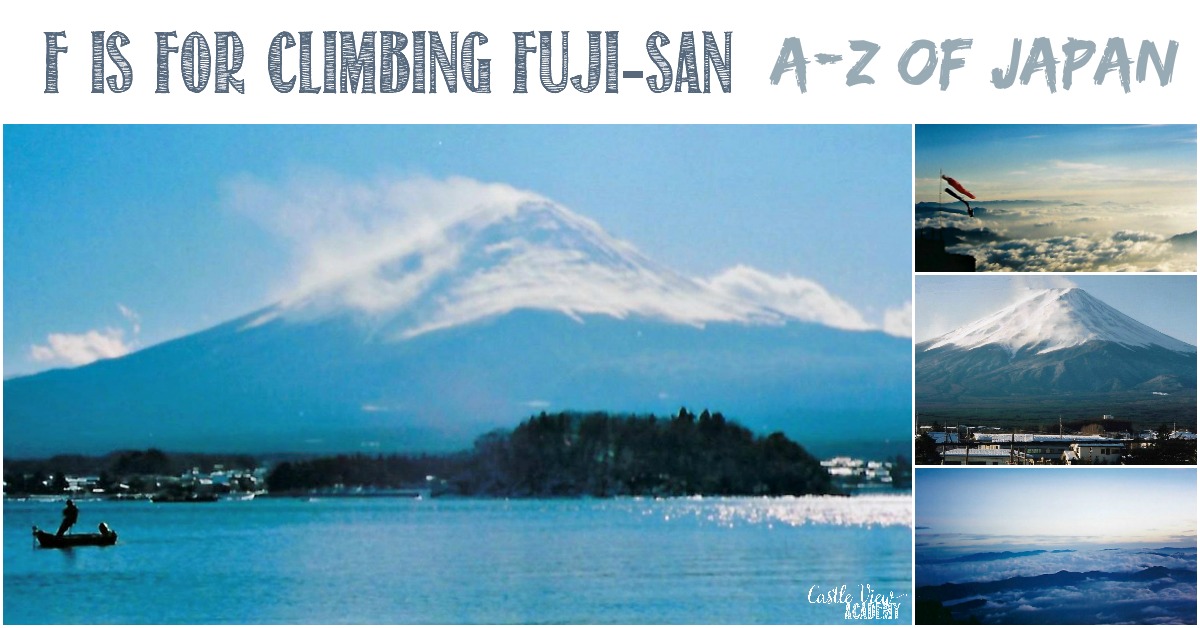 Mt. Fuji is of course, that great symbol of Japan that we’re all familiar with.  One of my ambitions when I went to Japan was to climb Mt. Fuji, or Fuji-san as it is referred to in Japan.  I’m sure I could spend a decade in that amazing country and never finish the list of things I’d like to do, see, or experience.  To see Fuji-san in person is awe-inspiring and I was able to see it in both the summer and winter.

There is a reason most photos of Fuji-san are when it’s snow-capped – there is snow upon its top much of the year, but during the summer there is so much humidity in Japan that it is often lost amongst the haze and cloud cover.

My first visit to Fuji-san was with my friend, Michelle who also worked at the University of Regina, though in a different department.  She came to visit me for two weeks in Japan during O-bon in August, which is prime climbing season….so of course, this is what we had to do!

After a day spent in Tokyo we took a night bus to Fuji-san and waited patiently to start our climb.  We had flashlights, warm jackets and layered clothing, snacks, and drinks to keep us going.  And of course we also each purchased a walking stick because you can’t do the climb without one.  It had a Japanese flag and a bell attached to it.  I had to leave my stick behind in Japan, unfortunately, but I still have my dusty flag, and my bells go on the Christmas tree each year.

Neither of us were very sporty, but we kept each other going.  The climb up was done in the dark of night.  Not much can be seen at all except the bassalt boulders in front of you and the twinkling lights of the next rest station.  We followed the ropes that were strung between posts up along a small path.  Some places were so steep that we were on all fours scrambling up and over the boulders.  Every so often there were the rest stations where we could stop to sit and rest for a bit.  There were huts you could pay to enter for some warm tea and a mat to sleep on, but we didn’t do that.  I should mention…just in case you were wondering…no, there aren’t any ‘outhouses’ along the way so you just ration the water you’ve brought and keep that in mind.

It was very cold ascending in the blackness.  We wore all our layers, gloves, hats, hoods, and all. 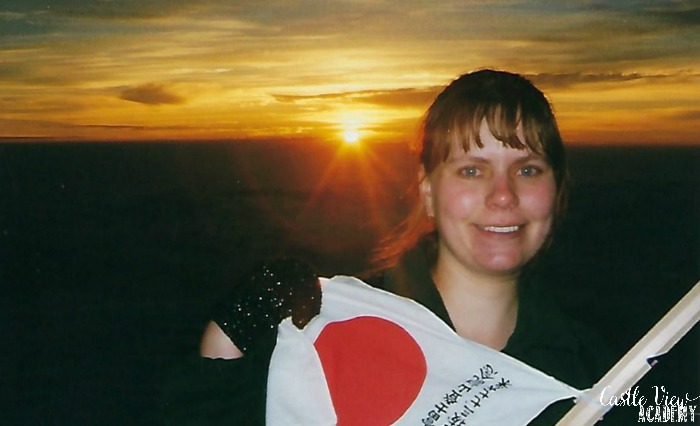 Our goal was to reach the summit and watch the sun rise from there.  Unfortunately, we didn’t quite make it up; though we could see it…we were soooo close, it hurt.  We contemplated continuing up but we had a bus we had to catch to Tottori and didn’t want to risk missing that as then we’d also miss our onward train and hotel and have to find our own transport and accommodations to catch up with our onward itinerary as my wonderful travel agent had pre-booked everything for us. 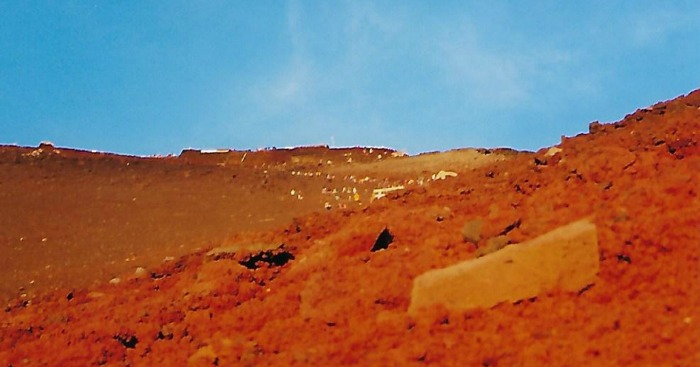 So, as hard as it was, we watched the amazing and memorable sun rise from above the clouds.  As the sun rose we had an amazing and unique view of Japan, my second home, and a land I long to return to.

We then began our descent.  One may think that the climb is the moist difficult part…but it’s NOT!   Going down was awful.  The view was spectacular, I must first say.  Rather than the big black basalt boulders of the ascent, we were now going down along iron-rich fine red sand and pebbles.  This created a very slippery path that was quite dangerous, really (one woman we’d met the night before had slipped and broken her leg on the way down), and most of the way down was spent sliding along on our feet and trying to stay upright.  My left hand and arm swelled so much I couldn’t move my fingers, and the pressure of my toes hitting the fronts of my runners with every step down the steep slope resulted in my losing a toenail; that was painful.

And the dust; it was so fine it found its way into every crack and crevice.  Between my teeth, under my clothes, and even into the film (remember those) compartment of my camera that was in a bag inside my backpack.

This was definitely one of my most defining memories of my time spent living, working, and travelling in Japan, and I’m glad that I had someone to share it with.

My second time visiting Fuji-san was from more of a distance, but where I could see her beauty more fully.  I spent my second New Year’s holiday travelling like a student on the local trains with a discount ticket.  I met up with friends in Tokyo for New Year’s Eve before making my way to Kawaguchi-ko (Lake Kawaguchi). 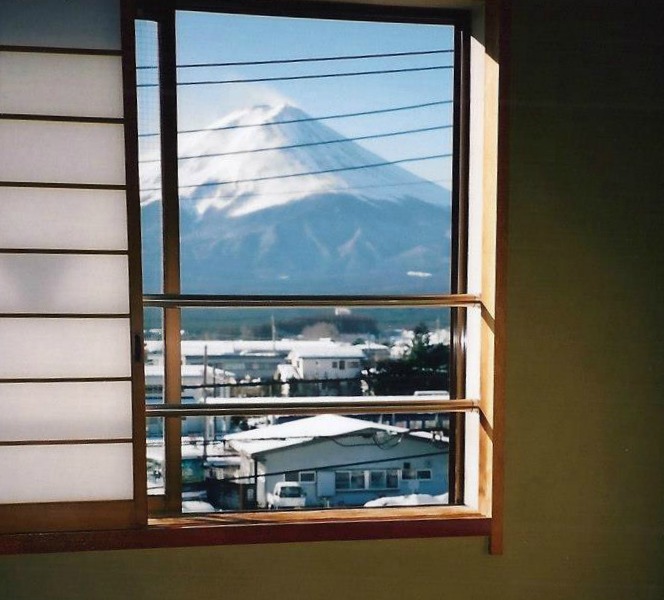 I stayed in a ryokan (a traditional inn) and could see Fuji-san from my window.  What an amazing view to go to sleep to and wake up to!  I spent as much time as I could just transfixed looking at her beauty.  Then I spent a day out and visited a kimono artist’s museum from where I really could see Fuji-san stand tall and majestically above the surrounding landscape and see her reflection in the lake.  It was a little breezy up there as you can see from the snow blowing off the peak.

I could have stayed there indefinitely, but alas, I had a train to catch as it was going to take me several train transfers and many hours using the local trains to return to my temporary home in Hamamatsu.  Should you ever find yourself living in Japan, Hamamatsu is a wonderful hub to reach so many weekend destinations quite easily.  I loved my 8 weeks there!

It is said that a wise man climbs Fuji-san once, and a fool does it more than once.  I reckon that since I didn’t make it completely to the very top, that I won’t be considered a complete fool when I someday make my return and conquer that great volcano!