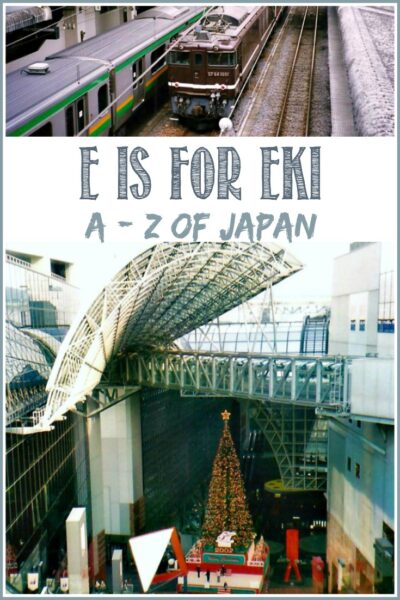 If you spend any time at all in Japan-even if it’s a day or two, you’ll quickly become acquainted with eki. Eki is the train station and was an essential part of my life in Japan. They come in all shapes, sizes, and locations. One could spend a lifetime researching them! This week my A-Z of Japan is E is for Eki. 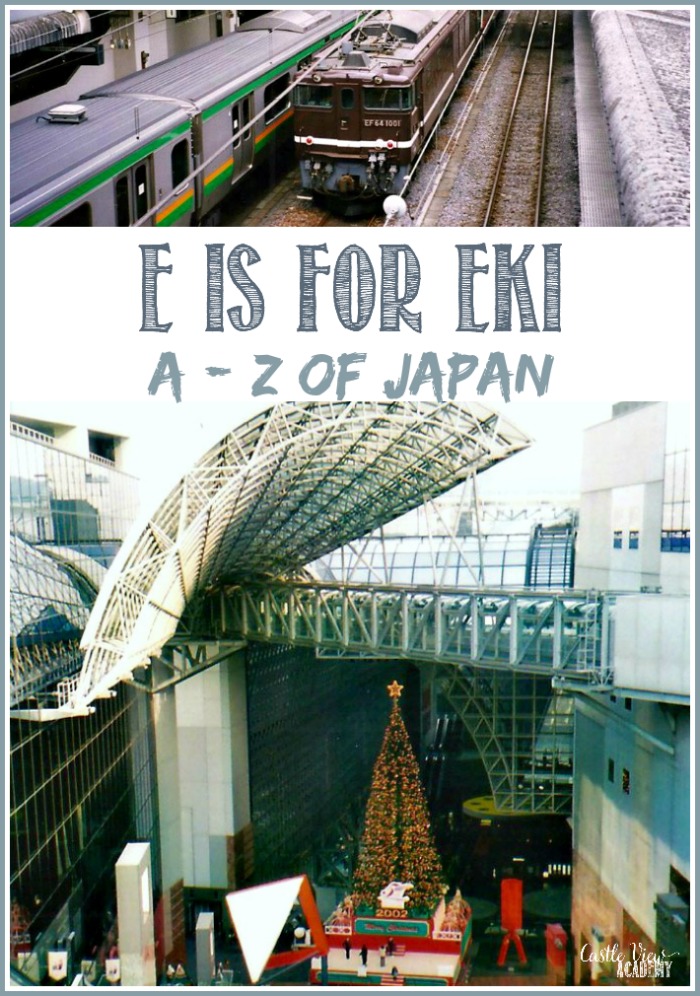 You’ll first experience an eki when you arrive by air and then use a train to get to your destination.  The phrase, “Eki wa, doko desu ka?“ is an important one to know (Where is the train station?). Once there, you’ll find everything you’ll need for your stay.

The eki are usually near the business centre of a city and within walking distance to everything you’ll need:

There is always something to do nearby to keep you entertained:

In fact, it’s in or above/below the eki that you will find local specialties.  In Kanazawa eki you’ll find many gold-leaf items such as chop sticks and bento boxes.  In Toyama eki you will find lots of seafood from the Japan Sea.  It is at the eki that travellers will purchase omiage for your coworkers and friends.

I visited Toyama eki pretty much every week to purchase a copy of the national newspaper in English.  They only brought in two editions a week, and they were dated two days before their arrival at the newspaper shop.  But I needed to read about what was happening in Japan and abroad a little deeper than what was shown on the morning NHK news.  During my time there, I clipped out interesting articles and put them into a scrapbook.

Below the Toyama eki was a fun clock that chimed on the hour and played chin-don music.  Toyama is known for its chin-don festival, which I must share with you in the future.  The top of this player would rise up and chin-don players would come out and rotate around the base.  It was a lot of fun to watch!

Most eki at the time only had signs in Japanese (Kyoto being the exception that comes to mind).  I became pretty proficient at finding my way around, but I do remember one occasion in a rural area where Mom and I were waiting at the wrong track for our train to arrive.  The station master very kindly made his way over to us and directed us to the correct track that we’d need to continue on our journey. Only once in my whole time did I ever get on the wrong train – not too bad considering the number of trips I took!

My two favourite eki were in Kanazawa and Kyoto.  Kanazawa because of all the beautiful local crafts that I spent hours admiring.  Kyoto eki has wonderful architecture and is a hive of activity, yet you can still find places to sit and have a moment’s reflection on your day.  At different times I’ve seen Astro Boy high up on a pole outside the station, as well as the Back To The Future car with the Mr. Fusion outside the station.

Below the station you will find underground pedestrian streets lined with shops selling just about everything.  I always made a point to stop at the foreign food shop and pick up a couple of treats like cottage cheese and maple cookies. But there were also restaurants of all description, clothes shops, news agents, souvenir shops, and more.

READ MORE:   10 Things To Do With Kids in Newcastle

Compared with train stations I’ve been through in other countries, Japanese eki are by far superior and a great place to learn about the local area; there is often a travel agent or two conveniently located within or next to the eki.

And now that I think about it, there was also that cool train station in Kinosaki where Michelle and I transferred trains at and had time to nip over next door where there was a free foot bath for weary travellers.  In the hot and humid August o-bon season, this was just the refreshment we needed a day or two after having climbed Fuji-san!  You’ll hear more about this in the next Japan A-Z post.

I must say that train stations here in Northern Ireland are pretty basic; many only have a platform and possibly a small shelter for bad weather.  My region in Canada hasn’t had passenger rail travel since I was about 5 or 6.  So it was a pleasure to travel by train in Japan, whether it be small, slow, local trains, or the higher class, shinkansen (bullet train).  And each station had its own charms awaiting.

Have you experienced a great train station anywhere along your travels?  Let me hear about it in the comments below!