Previously in this Japan A-Z series I shared my experiences with a live volcano, bicycles, and castles….all are very much a part of Japan.  During my time in Japan I had an unofficial quest to do as many ‘top 3’ lists as I could and during my final full day in Japan I completed this one.  Today in my quest to go through the alphabet with all things Japanese, I’m talking about the 4 Great Daibutsu (Giant Buddha) of Japan. 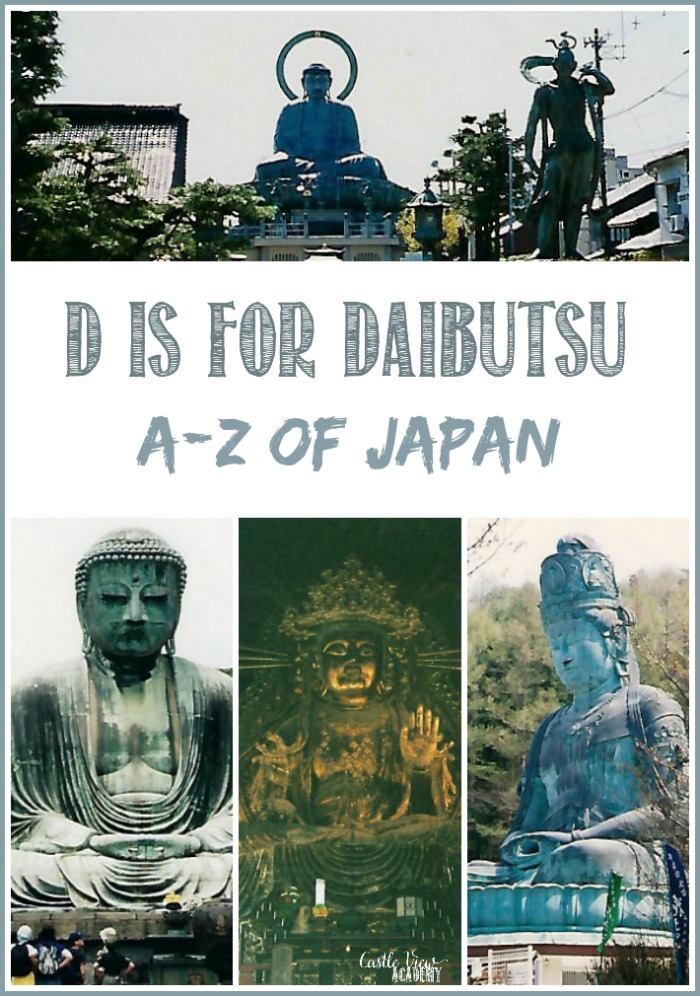 Many things in Japan have the title of ‘3 best….(gardens, scenes, etc.), and the same goes for daibutsu. However, if you’re from Toyama prefecture, then there are 4 Great Buddhas! 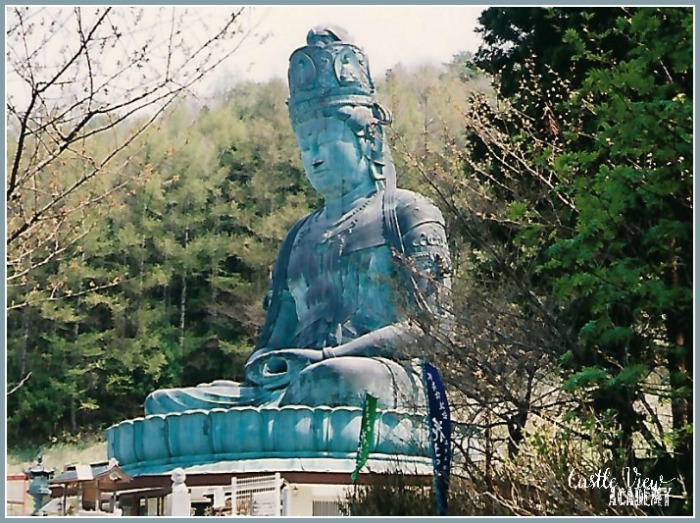 During my last big tour of Japan during Golden Week of 2003, I travelled on an overnight bus from Nikko to Aomori, Aomori Prefecture, which is right at the top of the main island of Honshu.  I was on a quest to see as much of Japan as I could and I hadn’t yet explored the north of Honshu.  Cherry blossom season had already passed in Takasaki, where I lived for my last 3 months, and I was able to experience it all over again in Aomori Prefecture!

I spent a day wandering around the city and spending a lovely afternoon on the grounds of Aomori Castle, and on another day I took a day trip further out to visit the Showa Daibutsu.   It was on the side of a mountain, surrounded by forest.  Along the path to see this daibutsu were many small shrines dedicated to babies who had passed away. 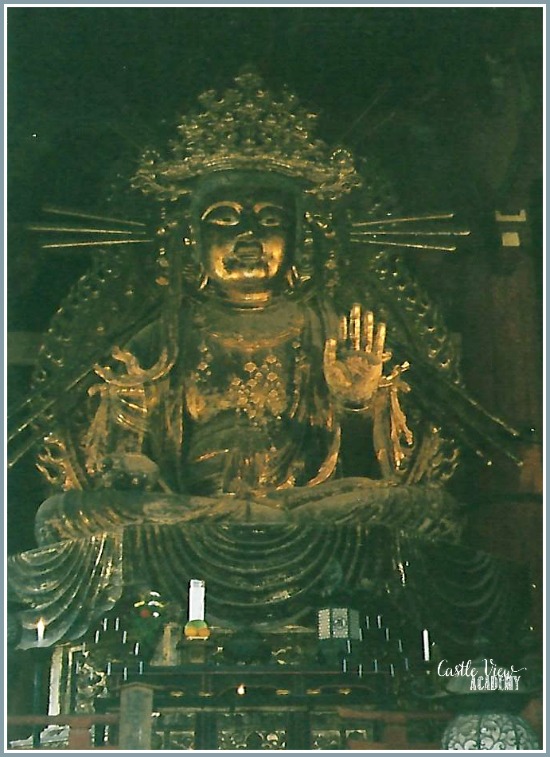 The most famous of all of the daibutsu of Japan is the Nara Daibutsu that sits in Todai-ji Temple in Nara, Nara Prefecture.  Nara is only about 30 minutes from Kyoto by train and is a beautiful day trip at anytime of the year.  The first time I visited Nara daibutsu was when Mom visited me during my first Golden Week, and then I returned again when Michelle flew over for O-bon.

One special thing about the Nara daibutsu is that this buddha sits in a huge wooden building (it’s been restored several times) and twice a year the huge shutters on the front of the building open up and you can see the daibutsu looking at you from within the structure. 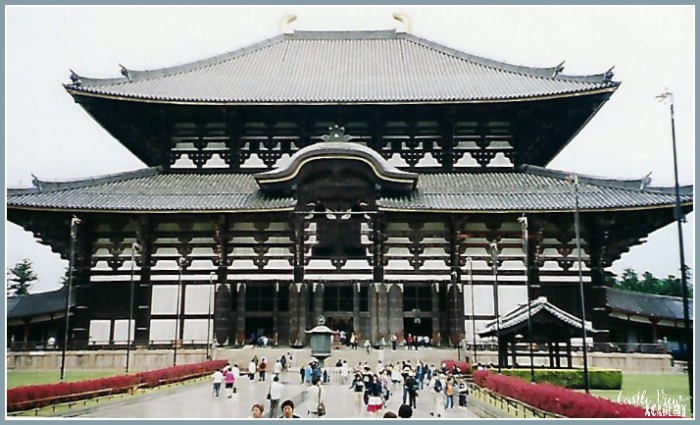 Michelle and I arrived later in the day and were among the last of the visitors to leave the grounds so that we had the experience of watching those shutters close once again as we stood outside the main gates.  It was very touching to see as dusk descended upon Nara.

A second neat thing about visiting this daibutsu is that one of the wooden pillars holding up the building has a square hole cut out of it about 8 inches up from the floor and it’s said that if you can fit through it you will be enlightened.

The Nara daibutsu is 14.98 m (49 ft 2 in) tall and weighs  500 tonnes, and this is one of UNESCO’s World Heritage sites, with the Todai-ji Temple being to world’s largest wooden structure until 1999.

The Takaoka Daibutsu is Japan’s 3rd largest Buddha at almost 16 meters tall.  The original Buddha burned down and the current one was built in 1933 out of Takaoka bronze.  Although this is the 3rd largest, it isn’t in the official ‘Top 3 Great Buddhas of Japan.’ 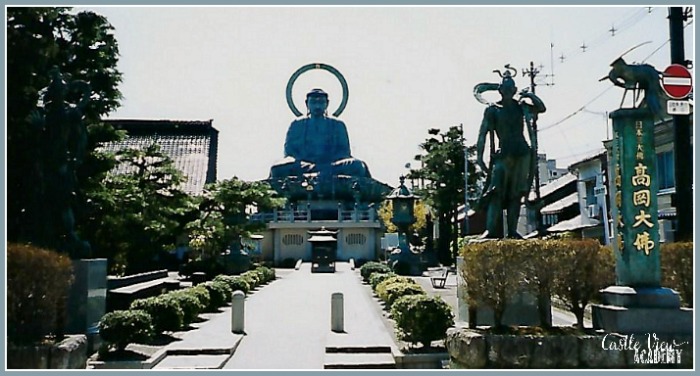 Takaoka is about 15 minutes by local trains from Toyama City and it isn’t a far walk to reach the daibutsu.

This may be one of the most powerful daibutsu I visited.  You can walk into the building below the Buddha; you walk around a big circular loop and on the walls are scenes depicting the 9 circles of Hell.  It’s quite graphic and scary and certainly leaves a lasting impression. 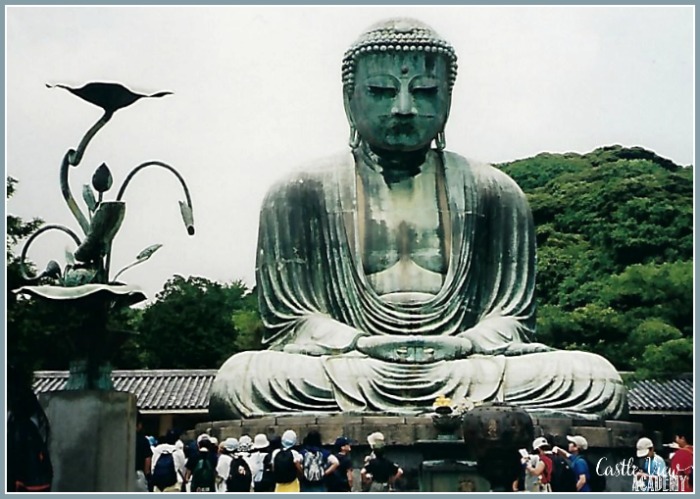 This was the final daibutsu I visited during a day trip from Tokyo to Kamakura, Kanagawa Prefecture, , which, if I recall is only about an hour or so away.  There were many school children there on class trips and we all have each other in photos.  Often when I travelled in Japan I would feel a little like a movies star with people wanting to be photographed with me! I soaked it up one last time as in less than 24 hours I’d be over the Pacific Ocean on my way back to Canada.

It was a beautiful day and a lovely memory to leave Japan with.

There you have it, my trips to see the Top 4 Best Buddha Statues in Japan! If you’ve been to Japan, are there any that you’d recommend that aren’t to be missed?  Let me now in the comments below.