Home » Culture » Asian Cultures » A-Z of Japan: B is For Bicycle

Welcome to the second instalment of my new series; The A-Z of Japan.  Last time I covered A is for Aso-san and memories of travelling with Mom to the island of Kyushu to see a live volcano.  I also spoke of the Aso-Boy steam train we took to get there.  This week I’m talking about another form of transportation; the bicycle. 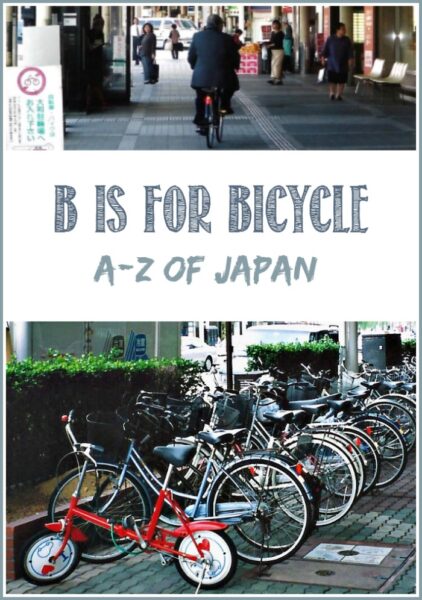 Public transportation in Japan is amazing!  From the Shinkansen (bullet train) to local busses and trams, everything is very convenient and always runs on time, right down to the second.  However, you may want to go somewhere that isn’t directly serviced by public transport, or the schedule doesn’t work for you.

Bicycles come in all different shapes and sizes; but you’ll often find that the majority of them are a bit beat up.  The reason for this, I’m told is that the two most common things to go missing in Japan are umbrellas and bicycles.  So if you have an old, run down bike it’s less likely to disappear.  Japan has a very low crime rate, but like any country, theft does happen.

You are always guaranteed to see bikes near the train stations, tram line stops, and shopping areas. It always astounded me how anyone could pick out their bike from the dozens, or sometimes hundreds that were lined up and looked the same to a casual passerby.

I only had the use of a bike for about five weeks during my time in Toyama.  The mother of one of my colleagues had purchased a new car shortly before I’d arrived and the bike came with the car.  Her family didn’t need the bike and generously gave it to Cari to use during her time working in Toyama.  When Cari moved on, she passed the bike over for me to use until I moved on to Kanazawa.

READ MORE:   A Personalized Bluetooth Speaker Is The Perfect Gift For Music Lovers!

I loved this little bike!  (It’s the little red one in front) It took a little getting used to, with the smaller size, but it was a lot of fun….although I’m sure I was the talk of the town for a little while. In Japan, cyclists share the sidewalk with pedestrians.  The sidewalks are wide to allow for this, but as I hadn’t been on a bicycle for many years…maybe over a decade (other than an afternoon in the Netherlands), it took me a little while to get used to getting my balance and steering back….

There actually were little old ladies who scurried out of my way when they saw me coming towards them weaving this way and that trying not to fall off!  I can’t blame them, and in a couple of cases, they were very wise to move in order to avoid an impending disaster.  I was a nightmare those first few days!

The photo below was taken to show the decibel meter in the upper left, but incidentally there’s a man riding his bike, so I thought I’d show you how they’re ridden on the sidewalks with confidence.

Once the initial wobbles were dealt with, it was just like getting back on a bike, as they say.  I didn’t take the bike to work, as it wasn’t very far, but on my three-day weekends, it was my new companion.  We went down the river, across the bridge and to the Museum of Modern Art where I always enjoyed the special exhibitions, particularly one with Japanese swords.

But my favourite place to head out with Little Red was to Fugan Canal Kansui Park.  I would take a drink and a snack and just sit and enjoy some peaceful time by the water.

READ MORE:   A World of Learning With Let's Go Geography

When I lived in Toyama-shi, there wasn’t a Starbucks in the whole prefecture, although just after I left, one did open in Takaoka, which was big news (Takaoka was about 15 minutes by train fro Toyama).  However, now the Fugan Canal Kansui Park Starbucks is considered to be the most beautiful in Japan!

Little Red and I took many trips together exploring places that were outside of comfortable walking distance.  It was the perfect way for me to end my year in Toyama-shi.

I haven’t been on a bike since; and I don’t think another would be the same.

If you’re interesting in bicycles and Japan, here are a few affiliate resources for you:

All content on this site is copyrighted and belongs to Castle View Academy/Crystal McClean 2011-2022.