Home » Homeschool Reviews » January Degustabox For A New You 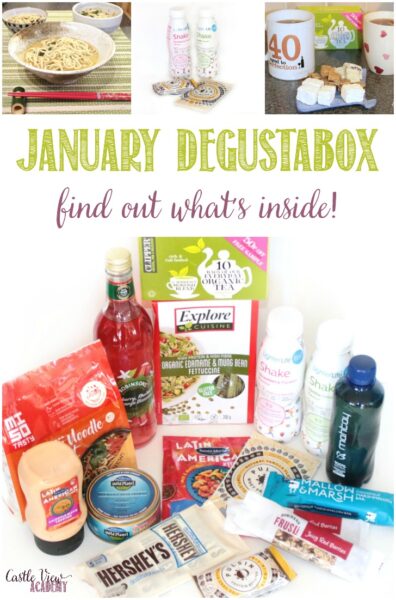 The January Degustabox will take you around the world and around then for a run around the block.  It’s filled with sweet and savoury items from North and South America, as well as closer to home.  There are also many protein-filled options for those who lead active lives and want a little boost. 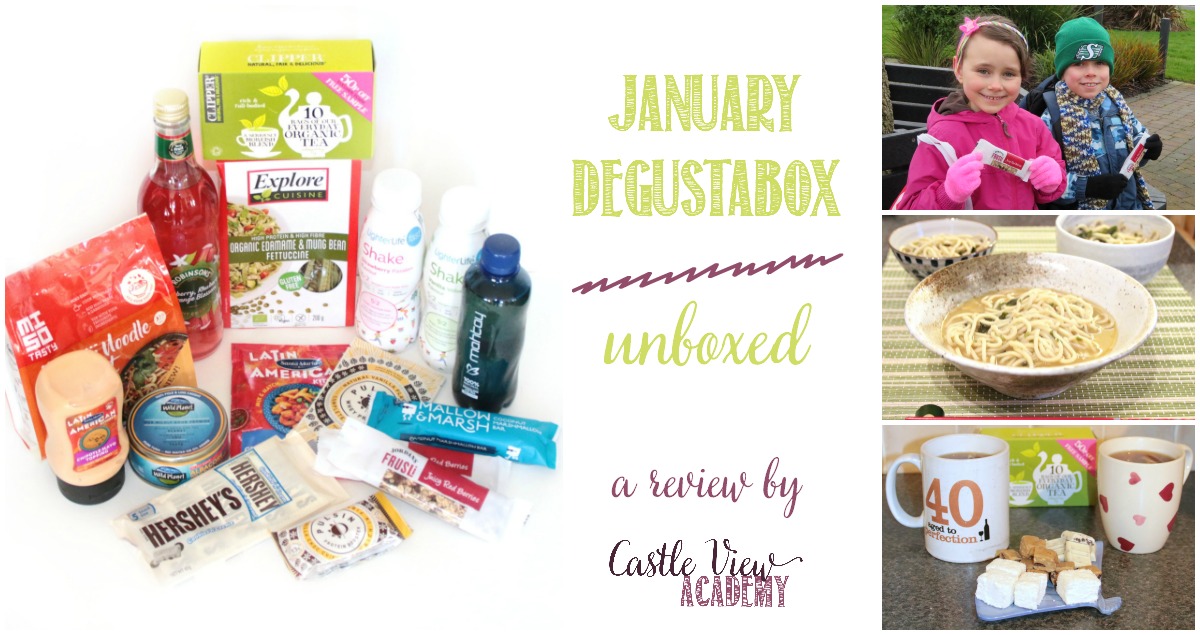 Each month we look forward to the arrival of our Degustabox.  For some reason this month has seemed to drag and it feels like forever since we reviewed our last box.   Our box arrived right on time the kids dug into it immediately to see what was below the brow wrap and green sticker.

Let’s start with the contents of the January Degustabox before moving on to our top picks.  Each monthly box contains between 10-15 products; some aren’t yet available in the shops which gives you the first chance to try them out!  The short version of this month’s box is that there are 14-15 items; 5 beverages, 5 savoury snacks, 6 sweet treats, 4-5 meal items, and 1 protein powder pouch.  The long version is…. 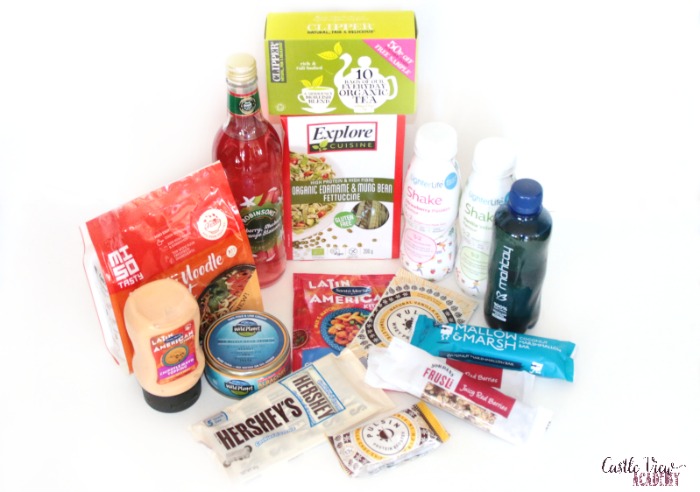 Degustabox sells for a regular monthly price of £12.99.  You can try out your first box for just £7.99, with free delivery.

This is the second (or is it the third) time that Wild Planet Albacore Wild Tuna Steaks have made an appearance in a Degustabox.  These are pole and line caught and don’t contain any added salt, water, or oil.  This tuna is full of flavour and is too good to use in a tuna sandwich.  Everyone in our family enjoys it a different way: atop a baked potato, plain on the side, or mixed into a salad.

Another favourite of mine is the Clipper Everyday Organic Tea.  One of my favourite things each day is when Phil makes me a cup of tea in the morning before he goes to work, and another after the kids go to bed.  I’m not a tea expert, but I know what I like, and what I don’t like, and though we sometimes try a new brand, I always gravitate back to our usual brand.  However, Clipper’s Everyday tea is right up there tied at the top!  It’s not so strong that it’s bitter, and it’s not too weak, either.  I’m so happy that this sample box was included in this month’s Degustabox, and on top of that, there’s a 50P off coupon as well!  We’ve already finished our box of tea and I have the coupon at the front door for our next grocery trip.

Did you know that Robinsons now comes in a Fruit Cordial?  It’s true!  And I really like it!  It doesn’t taste as artificial, the flavour is much fresher, and it also feels more grown up in their glass bottle.  This is something I’ll be looking out for to take along on picnics.

The children often get a little peckish when we’re out about town.  After all, taking part in a book club can be serious business.  To keep them going between lunch and dinner before Ju-Jitsu, they enjoyed the sweet, chewiness of Jordans Juicy Red Berry Frusli Bars.  The kids shared a bar which then left them with another one to have as a snack after a birthday visit to the aquarium.  They fit nicely in my backpack and as they’re a little chewy they bend rather than flake apart into a mess during transport.

The children also liked the Mallow & Marsh Coconut Marshmallow Bar (the white squares seen in the photo above- I cut the bar so that everyone could have some).  They hadn’t seen ‘homemade’ marshmallows before so were intrigued by the large rectangle covered in coconut.  Phil said it tastes like our favourite cake frosting that I make.

The Hersheys Cookies ‘N Creme Snack Pack didn’t last long.  White chocolate isn’t my favourite, but Phil likes it and he had one at home and took the others to work for snacks.  Phil always likes it when he likes something I don’t because it means more for him!

Phil has also had the strawberry LighterLife Fast Ready to Drink Shake (pictured 2 photos below) at work.  He said the flavour was nice, and it kept him filled for a couple of hours so that he didn’t have anything else to eat and he had energy for his bicycle commute home.  Meal replacement shakes are not something we usually consume, however.

Making it’s second appearance in a Degustabox is a Miso Ramen Noodle Kit.  We hadn’t yet tried the packet from a previous box, so I combined them so there was enough for everyone. There’s 1-2 servings per packet; depending on how hungry you are.  If you are making this for one, it’s easy because everything is divided into single-serving sizes and packets so you only use what you need at the time.

This was inspired by ramen in Sapporo, Japan so I was really looking forward to it as Sapporo is famous for its ramen and I indulged in two huge meals of it while I was there for 48 hours to see the Snow Festival in 2002.  It was my first overnight trip while working in Japan and has lots of memories for me.  The family all really liked this meal, but I’m afraid I wasn’t a big fan.  The noodles were a little thick for my liking, and the flavour just wasn’t for me on this day.  I think I’m having an ‘off’ month, though, as even some of my go-to foods aren’t sitting right.  Or maybe it was simply because there wasn’t a metre of snow outside and beautiful snow and ice sculptures to admire.  Some things just can’t be recreated.

We haven’t yet tried everything in this month’s box as we’ve had birthdays and other events going on, but we are looking forward to trying the Columbian Crunchy Chicken Bites Seasoned Corn Coating and Tristan is wanting to try out the Latin American Kitchen Chipotle Mayo Topping; it’s dairy free so he can have it, and it will add a little flavour to a salad or sandwich at lunchtime.

Children do love pasta, and my children do like trying new things as well so I’m curious to know what they will think of the Explore Cuisine Organic Edamame & Mung Bean Fettuccine.  This will be a bit of a treat when we have it instead of just ‘oh…pasta for dinner…’ It does come with a recipe in the box, but I’m thinking a light garlic and chilli flake dressing will be enough for it.

I will be honest and say that this month’s box wasn’t our favourite, but that’s not to say it wouldn’t be loved by those who frequent the gym or do meal-replacement drinks.  We found the Pulsin Vanilla Choc Chip Protein Booster to have an an after taste and although being sticky, it was also too dry in the mouth.  We haven’t tried the Pulsin Vanilla Whey Protein Powder, although it could be nice in a summer smoothy before Phil goes out for a big cycle ride around the countryside.  Protein powder is not something we’ve every used.

As well, the Mahtay Yerba Mate Sparkling Tea isn’t something that we’ll be purchasing.  I was looking forward to it, but I just wasn’t a fan of the flavour.  I only drank about a third of the bottle and while Phil did finish it, he also won’t be putting it on the grocery list.

If you’re looking for a gift for that awkward person this Christmas, why not get them a subscription to Degustabox?  With new surprised each month, it’s sure to please!!

Previous Post: « Learn About Ancient China With Mysteries In Time
Next Post: The Overwhelming Responsibility Of Home Education »