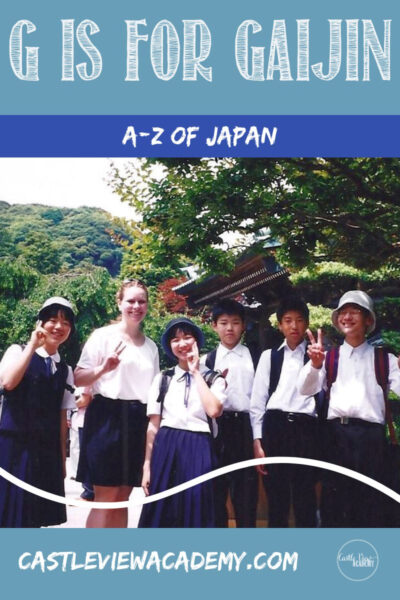 Next up in my A-Z of Japan (Fuji-san was last), is G is for Gaijin. In Japan the word gaijin means , outsider, as in a foreigner, usually from the Western world. It was introduced to me in Japan on the first morning of my training there. Sometimes it’s rather derogatory in manner and sometimes it can be a badge of honour, depending on the context.

I was very obviously a gaijin when I lived in Japan; from my skin colour, my hair colour, and my eye colour, there was no denying it. Young children were fascinated with me. I would have children touch my hair in class, and even adults a couple of times.

I have always felt like an outsider, even at home in Canada before I left, but in Japan I felt more at home because of it. It was weird going home after I had been in Japan and no one was looking at me in the shops or out on the street with interest. In Canada I was just another ‘ordinary’ person.

Here in Northern Ireland no one knows I was not born here, perhaps, until I speak and they hear my accent (17 years later and I still sound Canadian most of the time) unless of course they see the Canadian flag pin on my backpack.

Living abroad in a very different culture is something I think many should experience. It would (hopefully) open up the minds of many and it could result in less discrimination and more understanding of people with different backgrounds. To live where you’re in the minority and don’t understand the language and cultural norms gives a new appreciation of others.

There were only about a dozen foreigners in my ‘home town’ of Toyama when I was there. Everyone knew when I’d arrived, and when Mom came to visit after only two days people were asking me if she was in town because they’d seen a new gaijin around the city and assumed she was with me!

Unless you are in Tokyo, Kyoto, or Osaka, the big main tourist places in Japan, you could go for days or even weeks without seeing another foreigner. Except perhaps at work. Surprisingly, this didn’t really bother me very much. I’m not usually one to look for attention but at times it was fun having my photo taken – sometimes I felt like a celebrity, especially amongst children.

It’s definitely a unique experience to walk into a hotel or airport and have people call you by name before you’ve even reached the desk – they know who you are just by your foreign name and appearance. It can make you either feel like royalty, or make you feel like a sore thumb as you can never blend into the crowd. You must always be on your best behaviour so as to not shame your workplace or country. It’s a lot of responsibility, and can be exhausting, too.

No matter how long you live in Japan, you will always be an outsider; even if you were born there, if your parent(s) weren’t Japanese, you will never be ‘fully’ Japanese, which I know has troubled some people as it can lead to discrimination and always feeling like an outsider, even if it is the only home they’ve known.

Is gaijin a good or a bad reference for foreigners in japan? It really does depend on the situation. Some people don’t want to be associated with the word, but for me, at the time I was there, it was never used in a derogatory manner (at least not in my presence) and I didn’t mind it. I was, after all, only there for a period of time and no manner of hiding would cover up the fact that I was different. In daily life I respected others and they respected me and life was rich with experience.

I’m wondering if there are any other cultures which have specific words for foreigners and whether they carry a positive or a negative meaning to them? If you know of any, please let me know in the comments!

Previous Post: « Clever Dough Kids Academy – Learn to Earn, Save, And Invest Wisely
Next Post: Learn How To Doodle Everywhere »