Everyone needs their own sewing kit, and that includes my husband.  I have lost count of the number of times he’s called home at lunch to say he had ripped the seat of his trousers and had a sweater or jacket tied around his waist for the rest of the day.  So last Christmas I thought I would continue the tradition of my family and present him with a little homemade joke gift in his Christmas cracker!

I made my first sewing kit under the tutorship of my mom at the age of 7 or 8, and I still have it and use it. (It’s the little green kit in the photo with the flower on the front).  It’s small and convenient to keep in the craft box so I don’t have to go hunting in the awkwardly-placed sewing box.  It’s lasted well over the years, and I hope Phil’s does as well.

I didn’t want to have to go out and buy a lot of pellon when all I needed was a little bit, so it was Mom to the rescue once again – she sent me just enough, with a bit to spare in an emergency (aka air mail) envelope so I could get started and have it done in time.  It doesn’t really take a long time, but I don’t have a lot of time to work on things without little (or big) eyes watching and spoiling surprises.

The first thing I did was measure my own kit (6cm x 10cm) and then I cut out the pellon in the same dimensions.  I cut the pellon a little larger so that I could fold the ‘pages’ over and trim them to the same ‘folded’ size.

Then I chose the colour of felt to use, I decided blue would be good for Phil at work, and I cut this to be about 5mm larger around the edges than the inner pages (thus cutting it to 7cm x 11cm).

Now it was time to take out a needle and some thread and sew the pages into the felt cover.  A few minutes later and that was done.

My old sewing kit had a cute little flower button adorning the front of it, but I wanted something a little more masculine for hubby.  A browse through my craft box and I found just the thing.  I used a little wrench and a screwdriver I had left over from making Father’s Day cards.  I used a colourful brad clip from my craft stash to hold the embellishments in place. 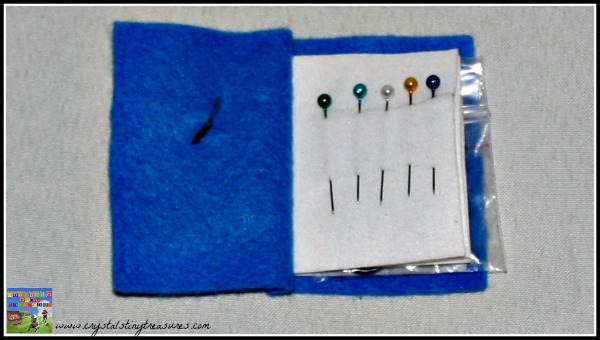 To add just a little thread to the kit I cut out two hour-glass shapes from some cardboard and wound the thread around them.  One with black thread and one with white.

To keep the buttons and thread in the kit, I enclosed them in a tiny zip-type bag and held it in place with another brad pin (also known as a fold-back pin, I think), 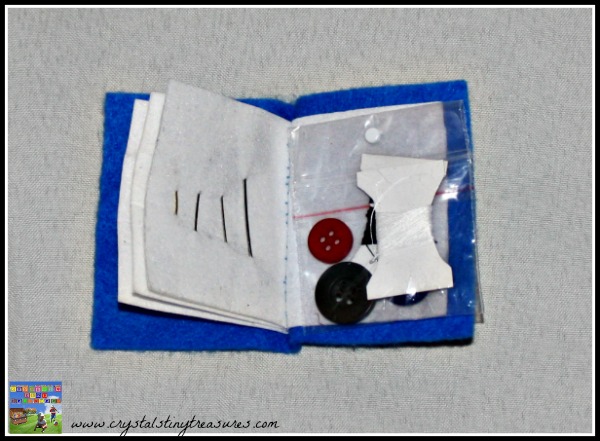 When it was completed I wrapped it in some tissue paper and enclosed it in our Christmas crackers with a little joke and a hat saved from a previous year.  When Phil saw what it was he cracked up laughing!  It was a success with him!  He did indeed take it to work with him and he leaves it in his desk drawer for emergencies.  His co-workers also had a good laugh when he showed it off.

It’s already been put to use more than once this year, and I had to plead with Phil to bring it home for the weekend to photograph it.  He doesn’t want to be without it in case he needs it.  It’s both practical and lovely, a perfect combination for girls, boys, and adults alike.  As you can see, these little kits can be made in a variety of creative ways to personalise them. 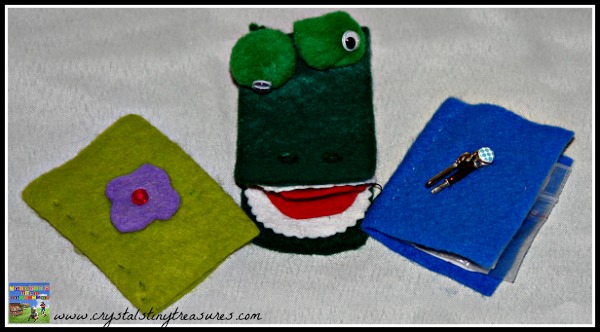 Have you ever had a clothing malfunction?  Then this is the perfect craft for you!

What has been your most embarrassing clothing malfunction?

Do you like felt crafts?  We’ve made a felt ice cream cone,  and a felt tree ornament.  Another cute diy gift is a beaded bracelet.  See our felt crafts page for all of our felt crafting ideas!