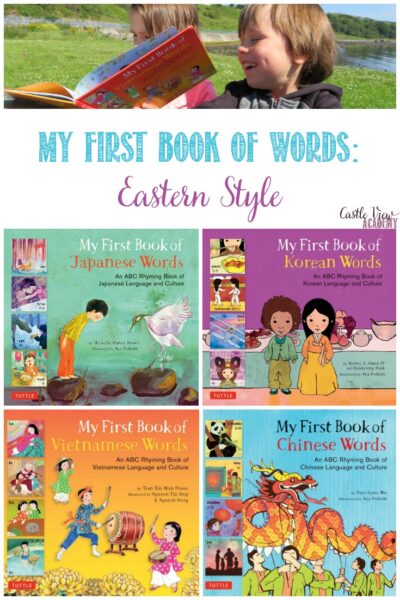 This week the children are starting a new geography class, and rather than start at the beginning, they’ll be starting with the countries for which they already have some fun resources for.  Thanks to Tuttle Publishing for sending us a set of My First Book of Words, we’ll be starting with China, Vietnam, Korea, and Japan.

When my children were toddlers and preschoolers I was like most parents and borrowed books from the library with simple words in them.  As they’ve grown, their English, of course, has expanded greatly, and we’ve dabbled in a couple of foreign languages (we’ll return to our lessons in September).

Foreign languages and cultures are so interesting, and exposing young children to them really can make a difference.  Western languages, of course, tend to be the most common in the Western world but the world is much larger than that.  Let’s not forget about the majority of the population that resides in the East.

Open up any one of these books and you’ll see beautiful illustrations depicting the target culture, a fun and memorable rhyme, the foreign vocab in Roman letters, as well as in their native script.

ABCs are one of the first thing young children are taught, and they may be surprised to learn that each language is different; they may not use the Roman alphabet, and certain English letters or sounds may not even be present in another language!  When this is the case, another word will be substituted (usually an English word for that letter, and then the other word is used in the rhyme).

Some of the pages in these books also give additional information about about the target word.  What it’s used for, where you’ll find it, or additional words to go along with it.

Great uses for My First Book of Words:

In addition to just enjoying the beautiful illustrations and learning a few new words, these books have other uses:

In fact, my children are currently taking a geography class and will learn about 30 of the world’s countries over the course of the year.  Although the lessons are set out in a particular order, we’re jumping ahead to learn about the countries we already have extra resources for (like Tuttle Publishing books) and working on those first!  It helps make things more relevant for the children, and it’s always wonderful when what you have can be integrated into other areas of study!

One concern you may have about these books, if you aren’t familiar with the languages already, is how will you know how to pronounce the targeted vocabulary correctly?

Well, don’t fear, the answer is near!

In the books themselves there are pronunciation guides to help get you started.  In addition to this, Tuttle Publishing has a link on their website labelled, Downloadable Content, and if you go into that area you’ll find a treasure trove of Tuttle titles that have bonus content waiting just for you!  You’ll find pronunciation help for each of these books there where you will be able to listen to the words in their native tongue.  How wonderful is that?

Tuttle has at least ten ‘My First Words’ books, so take a look at what they have to offer and you’ll be set to get children interested in languages and cultures from the East.

READ MORE:   Megson, "When I Was A Lad" Children's Folk Music

Who would these books be good for?