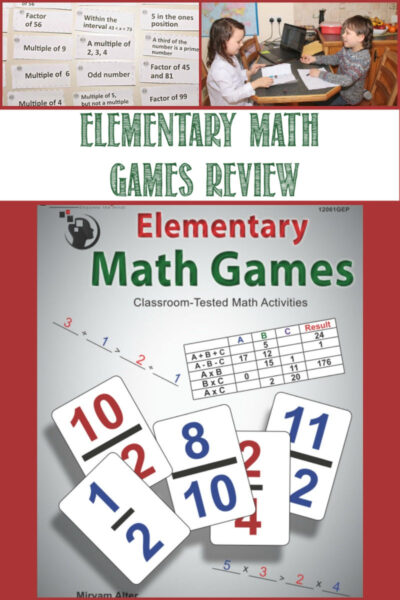 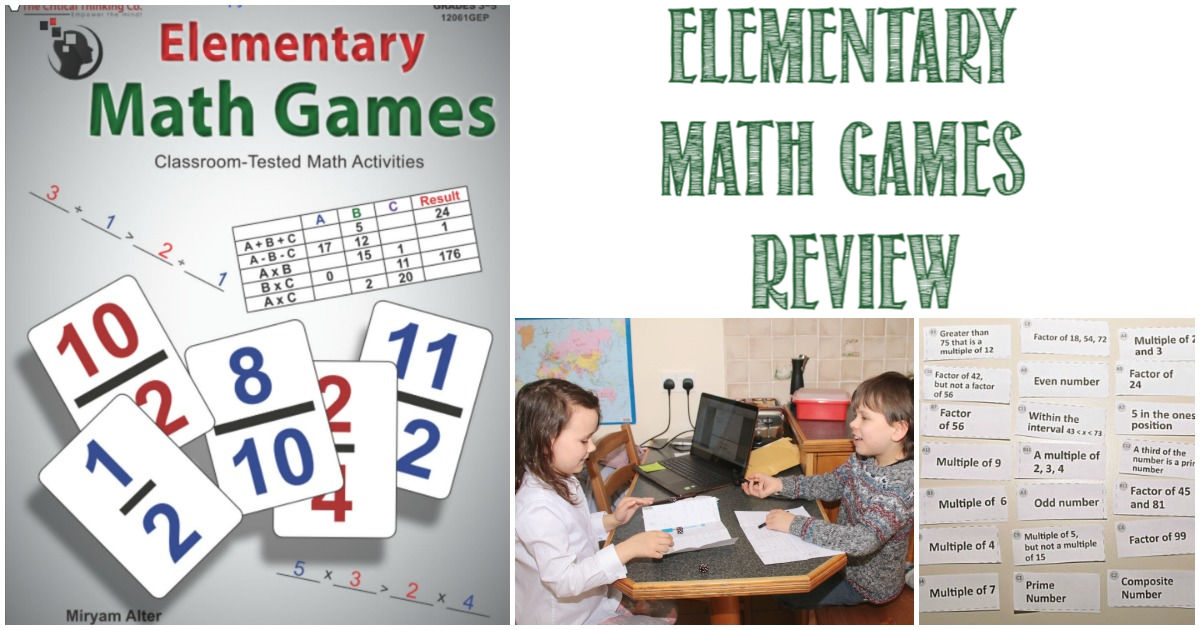 What’s Included, and What You Need

Elementary Math Games is aimed at students in grades 3-5 and is available as a physical book, or as a digital book (Windows only), which is what we received.  To use digital books from The Critical Thinking Co., you receive a program and a key code that must be installed in order to access the book each time you want to use it (the key code only upon installation, but you must run the program each time you would like to view the book).

The concepts practiced in Elementary Math Games are:

Other than the book, all you will need is paper, pencils, dice or a spinner, and a random number generator (these are freely available online).  Some games will require you to print out pages for play, while others can easily be done by hand to save on ink. 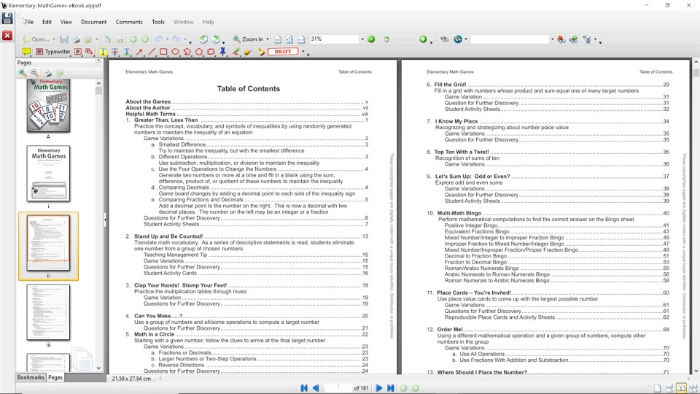 There are actually two levels of Math Games – elementary and middle school.  I chose the elementary level as then both of my children would be able to play it together and thus it would be more fun than just one child playing with Mom.  For some of the games, Kallista has to stretch her brain a little more to keep up with Tristan, while some games are more of a review for Tristan, which is okay, too.

There are 20 games included in this book, and several of the games have multiple variations to play, which means there are many ways to play and adapt the games depending upon the skills and needs of your children.  The vast majority of the games can be played easily with 2 or more children, but there are a couple that would work best with large groups, such as a classroom or co-op situation.

How We Used Elementary Math Games

What I like about this book, is that you don’t have to start at the beginning and work your way through in order.  You can pick and choose which games to play, which comes in handy to align the games with the topics your children are learning in math class.  In this way it’s easier to reinforce the concepts in a different and more engaging way.

Over the past few weeks, our house has been in chaos with so many things going on, so it was good to sit down with the kids and do something more relaxed and that didn’t involve their regular classes, but yet still involved learning.

The children have played 6 of the math games, and also at least 6 variations of some of those games, which makes a dozen new math games for them in total…and there’s still so much more for them to discover…I’m seeing us take the games out during summer walks and playing them by the sea or in the woods after a picnic when the class load is lighter, but we don’t want to lose brainpower.

Greater Than, Less Than 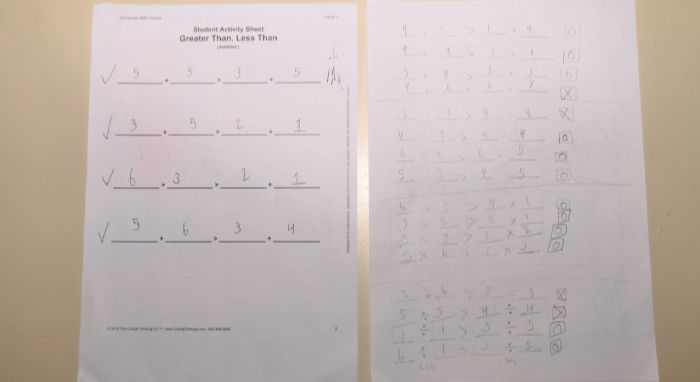 This is the first game in the book, and the one we started with; using both the original play rules, then moving on to the 5 variations of the game.  This game had the kids competing both against themselves and each other to roll the dice, then place their digits into their equation, then add, subtract, multiply, or divide to determine if their answers fit the protocol.

Clap Your Hands! Stomp Your Feet!

This game was fun for the kids, but would be much better with a larger group as the kids count out the beats and either clap or stomp when the multiples of their random number comes up.  It’s harder than you might think – I played along with the kids and it was a challenge.  With a large group, you’d have some great music going on!

A version of this game is actually a section of a quiz show here in the UK.  From a selection of numbers, can you manipulate them by using addition, subtraction, multiplication and/or division and hit the target number provided by a random generator?  It’s trickier than you think!

Let’s Sum Up, Odd or Even 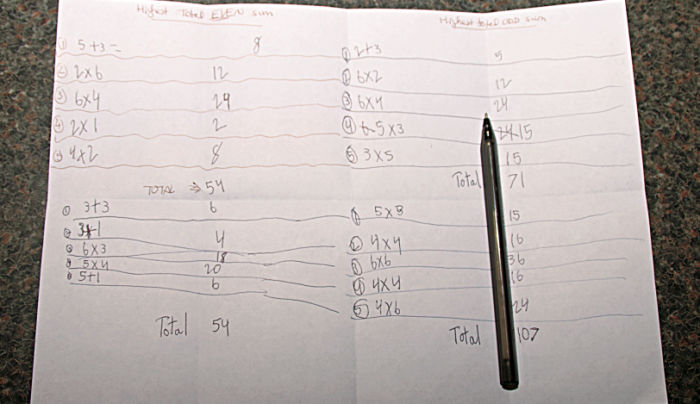 This game comes as is, or with an additional 4 variations.  Children roll the dice, then use the directions given, then add up their numbers for a grand total, which needs to be either an odd or an even number.  Can the kids crack the code before the summing up to determine the requirements that will give them that target?

Stand Up and Be Counted! 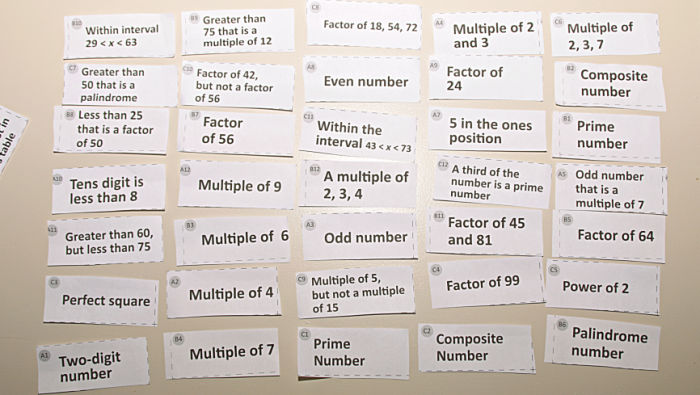 This game also has a standard version as well as two variations and three levels of play.  Kids choose 10 random numbers, then turn over a card and see if one of their numbers satisfies the parameters given on the card.  The first player to cross off all 10 of their numbers wins.

What Worked For Us

I like that this book can be used by both of my children so they can feel like part of a team instead of individuals sitting alone at a PC.  I like that there’s a variety of games that are both more calm, as well as ones that get the kids up and moving.  There are games such as Bingo, that all kids will immediately recognise, and then others that will be completely new to them so things are both familiar and interesting.  I also like the fact that you can jump around in the book, using games that work for you now, rather than being constrained by having to follow a set route of learning.

We’ll be travelling this summer, and I’m not looking forward to three 8-hour layovers, but I do think I’ll bring along a game or two to keep the kids busy and their minds off the monotony.  Printing off the instructions and bringing them along with dice won’t take up much space, which is great for carry-ons.

The children also had fun teaching some of these games to their dad while he was home on sick leave.  At first, I don’t think he was so keen to be using math for a game, but I could hear him chuckling and having a good time being involved with the kids’ education.  That’s one reason I like to mix things up now and then; everyday classes are fine, but it’s a real treat when all family members can be involved.

Special Offer from CriticalThinking.com: Free Shipping + 15% Off Any Size Order! 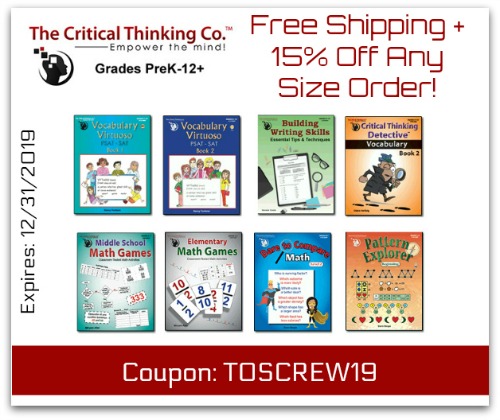 To read more reviews about The Critical Thinking Co.™ by the Homeschool Review Crew, click here.  You will find 75 honest reviews by the Crew on 8 different books across language arts and math at various levels.

Here are more of our reviews of The Critical Thinking Co. Products 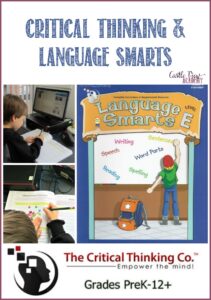 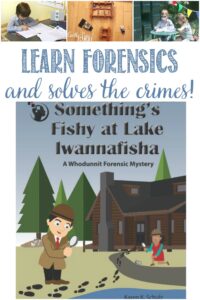 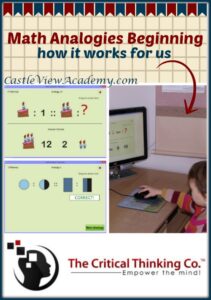