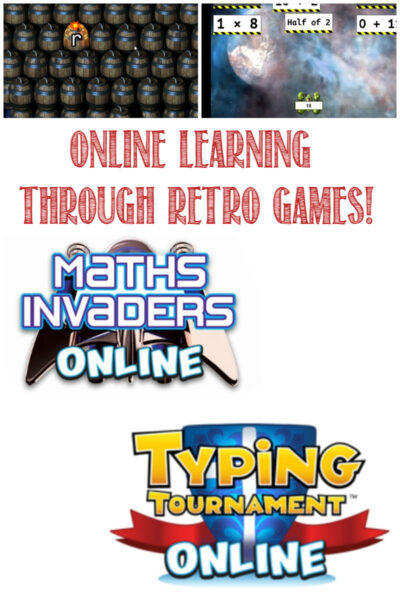 Over the past few weeks, my children have been using two programs by EdAlive; a typing tutor program called Typing Tournament Online and a fun math practice program called Maths Invaders Online.  Today we’re sharing our review of these online learning games with you. 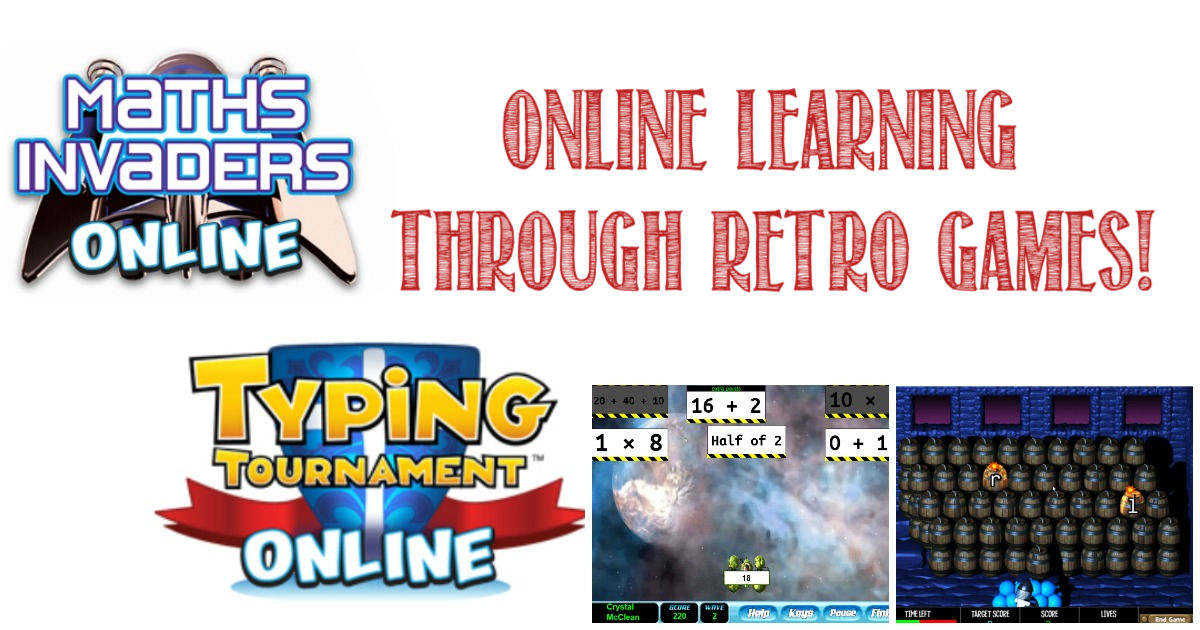 We received a one-year subscriptions for each product for each of my children (as well as me – I like to have a little fun now and then, too)!  These are online subscriptions, which my children used on the family PC, and they don’t take a lot of time to work on daily.  My children tended to use these games in their first hour of morning work and loved checking the lesson off their list quickly and with ease. 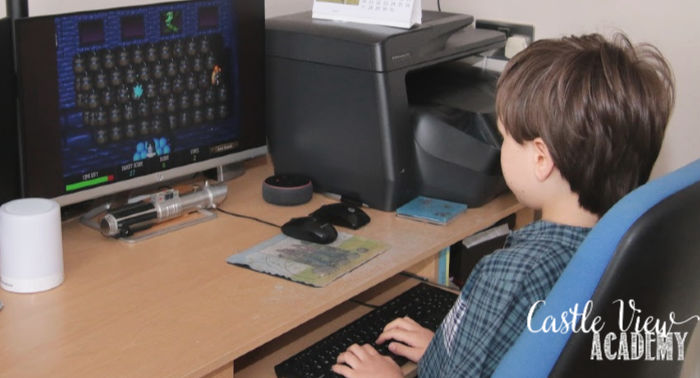 One interesting aspect of this program is that you can see how it aligns with several worldwide curricula, so I am able to see where my children sit not just according to USA programs, but also against the UK curriculum, and extrapolate from there for Northern Ireland.  It suits children from K – 10, so there’s plenty of room to wiggle there, as children have access to the entire range.

There are four parts to this program: 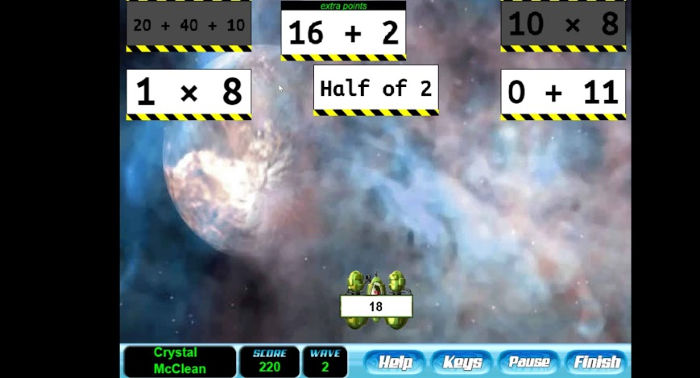 This game takes me back to the ’80s!  If you’re old enough to remember video games back then, you’ll feel right at home.  The questions scroll across the top of the screen, while moving slowly downward, while you think fast to answer the questions correctly and blast the alien ships before they land.  Both of my children enjoyed this.

This game has you competing against the computer or other students around the world, and is similar in concept to Battleship.  There is both a basic, and an advanced version.  This style of game was never my cup of tea, but my son likes it, and it’s allowing him to strategise, which is a good thing.  There are ways that you can achieve more points or various things, if you so desire.  This game also links with your achievements in Galactic Campaign; by doing well in Galactic Campaign, you can unlock games within Space Rescue.

There is a special area for kids to work on their times tables.  My children touched on this, but because they are currently using a different program for this, I didn’t want to confuse matters with another method.  However, you’ll see below, I did have them work on multiplication using worksheets.

There is a math worksheet generator included that can be set to a particular grade and set of problems across the spectrum of possibilities.  My daughter really loved these and asks for more worksheets to complete.  My son, who doesn’t generally like worksheets, particularly when it comes to multiplication, went through his quite quickly.  Multiplication hasn’t been one of his strong suits, but the game style Math Invaders has been getting his brain moving a little more swiftly so he can get a better score, and it’s reflected in the speed in which he can now complete a worksheet.  I’ll take that win! 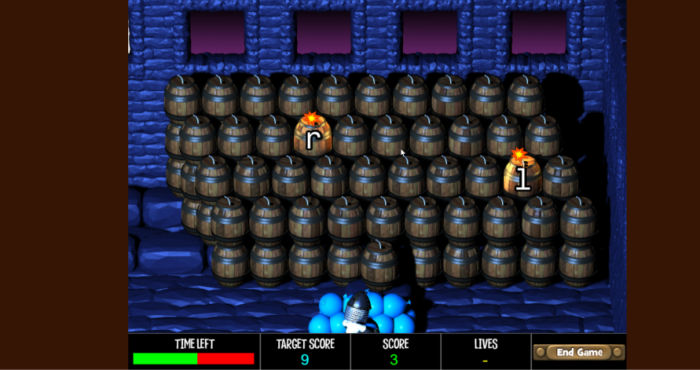 Typing Tournament Online is quite addictive, even for me! I discovered that my own typing speed is much faster than I imagined it was (perhaps using a laptop or PC is easier on the fingers than an old IBM Selectrix) and it also helps that with this program you are permitted to correct your errors, although your final result does show how many errors you made (corrected and uncorrected).

You can go right from a very beginner with no knowledge of touch typing, right up to having a goal of over 100 words per minute.  You become a knight on a quest and progress through the lessons, drills, and tests to move along the map.

Correct hand position and posture are taught on-screen before you begin.  You can jump in a different levels depending upon your experience and ability.  The lessons are taught in the standard method of beginning with the home row and using the keys ‘asdf’ first.  Each lesson stage has its own target keys, however, you can adjust your target speed up and down at any time, which means you can do what is comfortable for you, while still being challenged.  We all know there are those certain keys that slow us down, and now we don’t need to feel guilty about it.

The children and I have dabbled in a few typing programs over the years, and I’m enjoying this one for its ease of use and no nonsense but fun approach.  My children have also been practicing (which of course, was the reason for getting it), and they’ve been slowly but steadily improving.

Through the parent’s dashboard you can see all your students and their progress through both programs.

For Typing Tournament, you can see the levels passed by your students.  If you hover over one of the marks, you’ll see which of the targeted keys were involved, how many words/minute they achieved, and how many errors were made, as well as the accuracy percentage.

In the Math Invaders parent’s dashboard you can see when your child has logged on, and below that, the lessons they have worked on. That’s pretty handy.

In this screenshot you can see how the grade levels progress across math topics and how my child has worked their way through.  If you’d like to know what’s in any of the cells, hover over it and you’ll see an explanation, as well as a few sample equations scrolling through at the bottom of the popup.

One awesome thing about Typing Tournament is that it doesn’t matter whether you have a keyboard from North America or the UK; both will work great for this program as they purposefully don’t use keystrokes that are in different places on the keyboard.  This is such a delight, I must say!  That has been my one pet peeve over the years – using our UK keyboard for US programs, which leaves me confused, as well as the children.

I also like that the speed goal can be changed both up and down, I know I’ve done this, and so have my children; it gives them more control and thus willingness to challenge themselves. 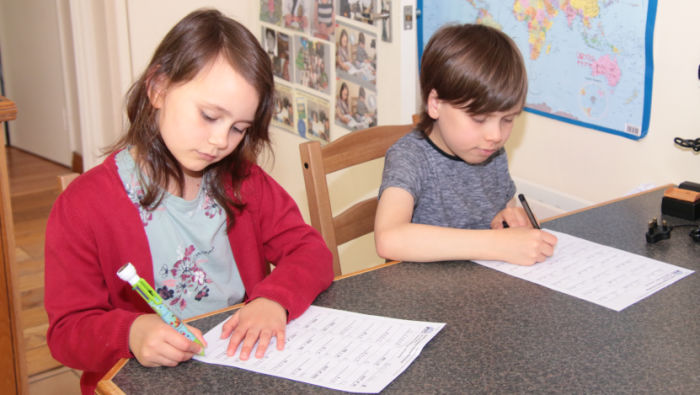 I also like the retro feeling of Space Invaders (not that I’m showing my age here at all), and that the children can use it to cement their knowledge in a fun way and become better at rote recall, which is so important.  I’m sure my children will continue to use these programs on their own alongside their usual math course because they find them so fun.