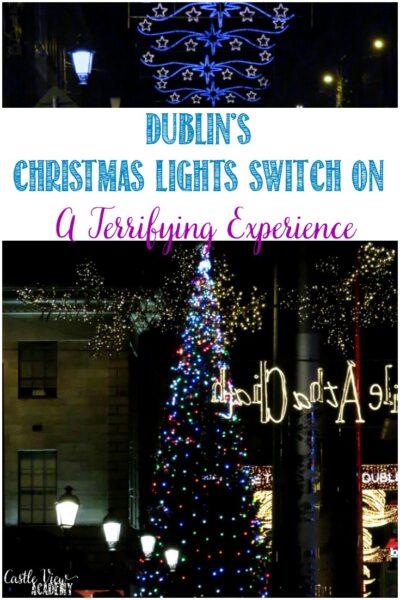 Have you ever attended a Christmas Lights Switch On?  I have gone to them in Tokyo (technically it was a New Year’s switch on), Carrickfergus, a couple of smaller locations, and now Dublin.  Two weeks ago our family took a day trip down to Ireland’s capital.  As I’d mentioned in our post about our Hop On Hop Off Bus Tour, it also happened to be the day of Dublin’s Christmas Lights Switch on.  They were going to turn on their 1 million Christmas lights around the city centre.  And although we love Dublin and will return, what follows is why we will never attend another big-city Christmas lights switch on event again. 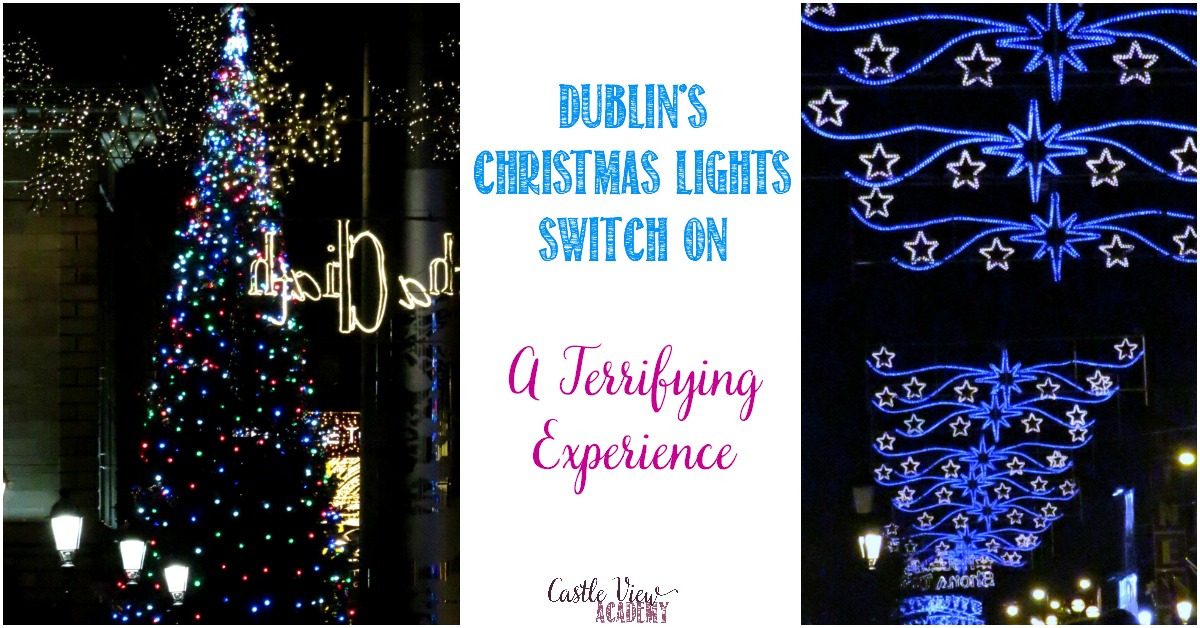 A Rocky Start To The Day

All week we had our eyes on the forecast, and after showing rain, finally the day was to be mostly dry, with rain falling only after we’d be on our way back home.  A great way to start, we were off on our adventure!  The car ride to Belfast was uneventful and we found a parking space about a kilometre from the bus station.  Perfect.  A short walk there, then we hit our first snag: they couldn’t find our names on their reserve list so we would have to pay again at an increased rate…not good.  But we didn’t have a choice.

Luckily, they checked the list before they left the station and called out on the bus as there were four on the list that had not checked in.  That would be us.  A warning to all:  auto-fill can be a dangerous thing!  It had reversed my first and last names and had me in as M Crystal.  We were able to get our second set of tickets refunded before the bus left the station and we were on our way!

We all caught a bit of a cat nap on the ride down in the dark.  It took from 7:00am to 9;30 to arrive in Dublin’s city centre.  We enjoyed our Hop On Hop Off Bus Tours, mixed in with coffee stops to warm up and a picnic lunch.  We spent time at the Archaeology and History Museum for the kids (who didn’t want to leave, even though it was time to close), and we found out the Christmas lights switch on was that same day, so we thought we might stay for it as the weather was still holding out, and it would only be an hour extra for the next bus.  When in Dublin, do what the Dubliners do and get the whole experience!

Grafton Street was having a light switch on, and the crowds were gathering and it was becoming quite crowded so we headed away from the area.  Tristan had purchased a postcard at the museum and wanted to send it to himself so we needed to find a postbox.  We hadn’t come across one yet, so we headed towards the General Post Office on O’Connell Street as that was a logical place to find one.  Then we would find a place to settle in and watch one of the two parades that were going to come from different directions and converge on O’Connell Street.

Things weren’t too bad as we crossed the bridge and went past the Spire towards the GPO.

However, the crowds were rapidly becoming more dense with people pushing and shoving their way through.  We were right in front of the GPO and couldn’t see a post box so we were going to head past the building and turn into the side street and find a less crowded place to watch from.  Unfortunately, the crowds by now were such that we couldn’t move.  We were just a few meters from the side street but couldn’t make it.  We were behind a post and a little protected so we tried to stay there as we couldn’t move any further, especially with our small children with us.  They couldn’t see anything other than strangers’ butts and the women’s handbags that kept bumping them in the face as people continued to elbow and force their way further into the crowds.

The security firm hired to keep things under control weren’t doing their job.  One at the corner we were trying to reach had climbed up some scaffolding and was taking videos with his mobile phone of the crowds instead of preventing more people from entering the area!

Finally, the lights were switched on (we didn’t even hear a countdown, and we were just across the street from the main tree), and the announcer told everyone to move on and leave the area now.  We found out later that the parades had been stopped early as they couldn’t move up the street as a path wasn’t kept clear for them.  Also, the size of the crowds had become dangerous so they stopped all entertainment at both O’Connell Street and Grafton Street.

By this point I was seriously concerned for the safety of my children.  I was being pushed from every direction; I never speak out, but I turned around at one point and told an older teen that there were small children ahead of me (ours, plus others) and not to push; I softened it by saying I understood he was also being pushed, but to try to protect the children.  I was losing my balance but knew that if I even shifted a centimetre to stand upright and firm again, that space behind me would fill and I’d be pushed over on top of my children.  And if we went down, what would happen then?  I was going to do whatever it took for my children not to be trampled.

Yes.  Things really were this seriously frightening.  Phil had Tristan and they had moved ahead a little.  I wanted to keep them in sight and know they’d made it safely around the corner of the building to the open street.  They moved further ahead and Kallista and I were stuck behind as a woman with a ‘mouth’ had shoved between us and knocked Kallista with her handbag and me with her scarf as she tossed it around her neck swearing all the while, not caring that there were kids around (she had one with her).

Now we were up against some portable metal barriers.  That could be bad.  So I took Kallista’s hands in mine, her just ahead of me, we slowly inched ahead, going with the flow, trying to leave space between the barriers and us, finally, finally, we made it around that corner, past the so-called event security, and half way down the street to meet up once again with Phil and Tristan.

Never was I so happy to see them!

Never was I so relieved for space to move!

I’ve been in crowds before during concerts and events, but it’s a much different situation to be younger and single and only responsible for myself.  Now I’m older (and perhaps a little wiser), and I am responsible for the health, well-being, and safety of our children’s lives.  This is a heavy responsibility and one I take seriously.

Never will we attend an event such as this again.  I now understand why the same event in Belfast requires you to have (free) tickets to access the area within a block of the Christmas tree and stage for it’s lighting.  And Belfast had good barriers, good crowd control, and crowd acceptance at their event this year (I also happened to be there for an art class on the day of the Belfast event).  I came out of a shop and the street was empty: everyone had moved away while I was inside so I just had to walk calmly down the street and past the security at the barriers to exit the area and head towards the train station.

When Will They Learn?

The UK is still dealing with crowds causing crushing injuries and stampedes and learning from what happened years back at a soccer game.  Reading tweets and Facebook accounts after we returned safely home, there were people who fainted in O’Connell Street.  Things were very concerning if you were in the crowds.  But the organisers didn’t act until it was too late.  In fact, to read the newspaper articles, you’d think the night was a complete success!  Obviously, the reporters were near the tree, or viewing from the safety of a window above.

They say they hadn’t expected the size of the crowds that arrived.  They said the dry, warmer weather was a factor.  But apparently they had trouble with the crowds last year, too.  So they tried something different this year.  On paper it may have looked good; but in reality it was a true danger.

What Have I Learned?

I have learned that I am okay with living in a small town where people look out for each other.  We have our own festival here; complete with a Christmas lights switch on and topped off with fireworks.  With people coming from all over to attend, there are crowds and local people complain about traffic and parking being bad that day.  But people are happy and joyous, not grumpy and shovy.  And if we’ve had enough we can walk home at any time and watch the fireworks from the front step (if it’s very cold, we can stay indoors and squish our faces against the windows while looking to the left to see them above the trees).

I may feel crowded in by the hills at times, but I can walk down to the Irish Sea and look across to Scotland if I’m feeling too closed-in.  We may live in a small house; but there are only 4 of us here; two or three generations ago there likely would have been 14-16.  So I’m grateful for the space we do have, and grateful that I can walk to a bigger space outdoors if I want to.

I don’t miss city living very often; especially after experiences like we had in Dublin.  So I may find myself being an old-fashioned stick-in-the-mud to my children in the future at times; but I think that after our experience, they’ll have a greater appreciation and understanding of where we’re coming from when it concerns their safety.

Previous Post: « The November Degustabox Is Sweet and Savoury
Next Post: Set Sail With The Viking Explorers From Mysteries In Time »