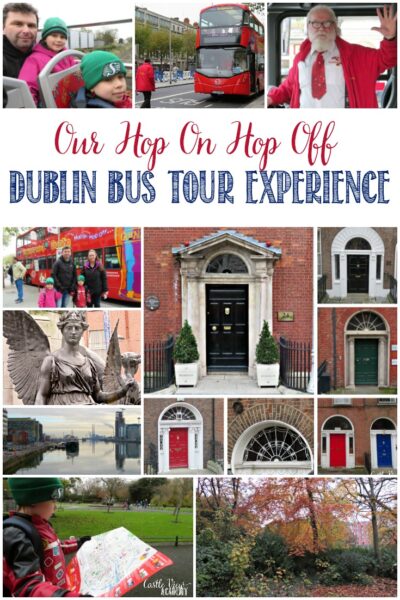 Have you ever been on a Hop-On Hop-Off bus tour?  I did one many years ago in Edinburgh and enjoyed it so much I thought that a Dublin bus tour would be perfect when we took a day trip down to Dublin to meet a cousin of mine for the first time.  You never know if you’ll have the same interests, so an open-top bus tour would give us a slice of the city and something to talk about, should we need it. 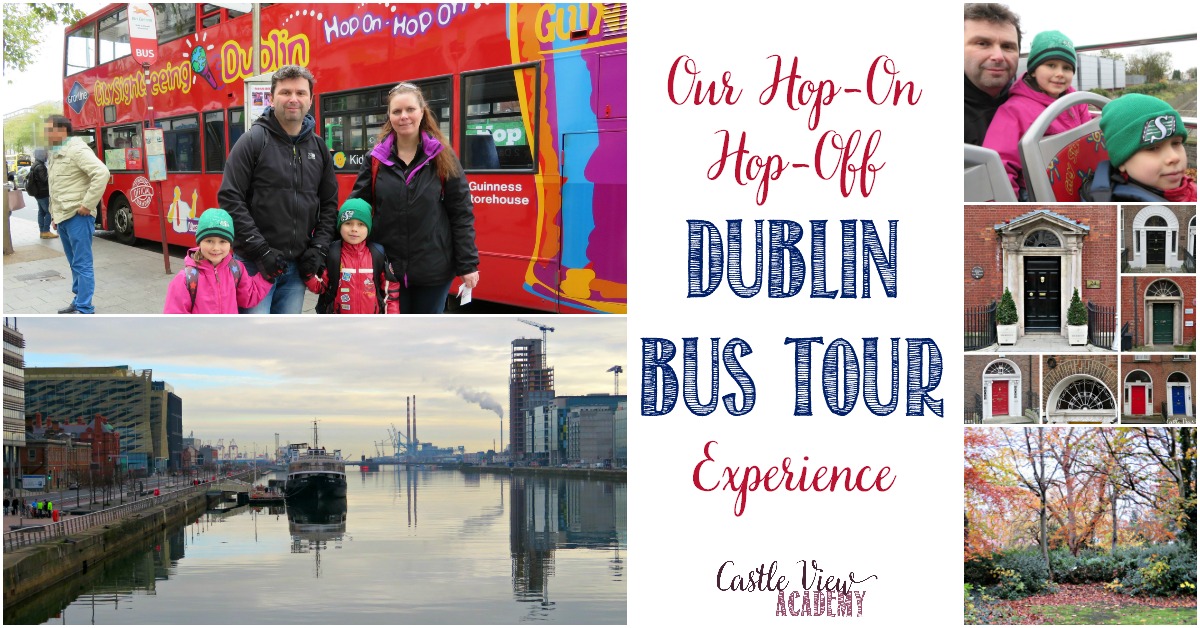 We give a special thanks to Isango Ltd. for providing us with our tickets for the day and making this occasion truly memorable for the whole family!  Our trip began by leaving the house before 5:30AM one cool Sunday morning in November.  We had to drive first to Belfast before taking a cross-boarder bus to Dublin, arriving at 9:30 at Connolly station.  It was only a short walk past the Custom House to O’Connell Street, where we exchanged our online voucher for our tickets.

Over here on the Emerald Isle, it isn’t very common for anything to be open before 1:00pm on a Sunday.  That’s what makes a Hop on hop off Dublin bus tour such a great option for a Sunday morning as it runs from 9:30 and 10:00am (depending on the route).  You have the chance to travel through the city without as much noise and traffic as the rest of the week and you can make use of your time in the city; I’m sure there are many others who have only a limited time there and want to pack in as much as possible while they have the opportunity. 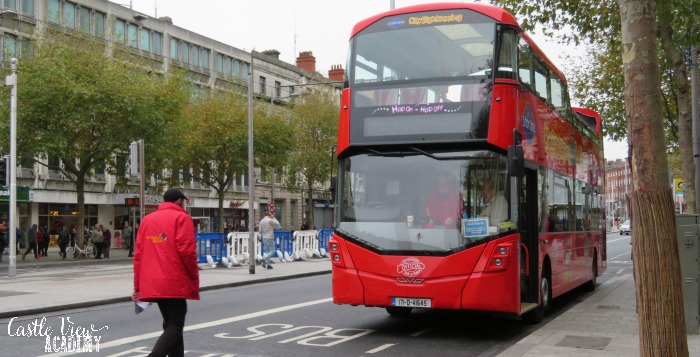 What’s included in your ticket? 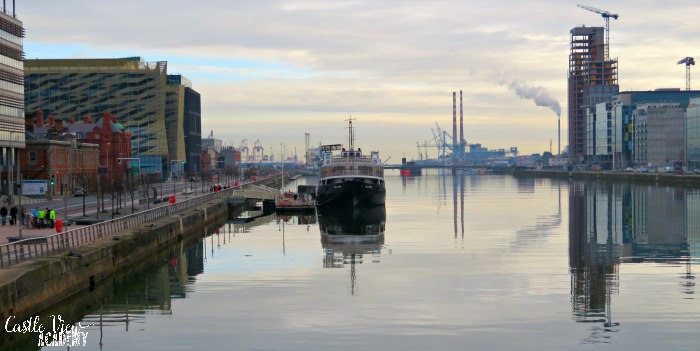 The blue line goes further out from the city centre and finishes earlier in the day while the red line (for the most part) stays closer to the centre of the city, with the exception of a Phoenix Park stop.  Each tour will take you on a loop of about an hour and a half (it could be longer if traffic is bad), and both loops will take you to both sides of the River Liffey.  Tristan was able to tell us that the first bridge we crossed, the Samuel Becket bridge, was a cable-stayed bridge.  That was a great connection for him to be able to learn about bridges in his engineering class and then be able to apply his knowledge!

READ MORE:   Do You Use ParentSpeak?

You can purchase your tickets online before you travel, or in Dublin on the day.  If you purchase your tickets on-line, then you will have to make sure to print out your confirmation and take it with you to exchange in one of two locations.  I’ll note here that you’ll received individual tickets so that if you’re with other adults this allows you to go your separate ways and meet up again so everyone can do what interests them, and yet you can travel together as well. 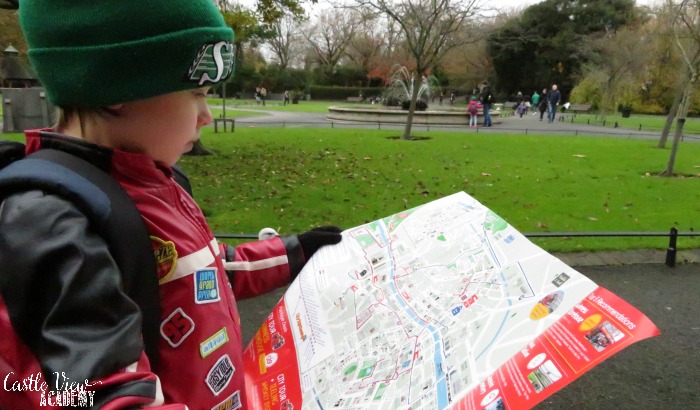 The Hop On Hop Off Dublin bus tour stops at loads of attractions and at the major stops there is extra time for people to get on get on and off.  It also allows for room in their schedule if traffic has been delayed; perhaps due to a horse and carriage (we saw at least four during our day).

For families with children the Dublin Hop On Hop Off bus tour means that they don’t have to walk everywhere.  There will be no need for the listening to the “I’m too tired to walk” syndrome, and this will make everyone’s experience better in itself!

Using the Hop On Hop Off busses are easier than local busses.  You don’t have to deal with several different routes and schedules and paying a separate price for each trip.  You can read our post about Kallista’s art award and what can happen when the schedules don’t work.  That was one experience we don’t want to repeat again. 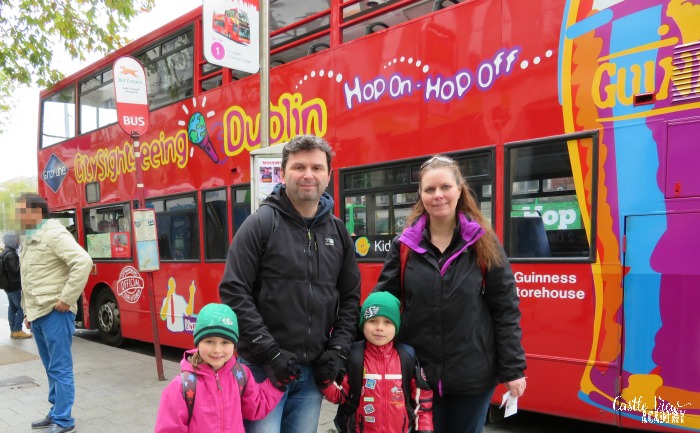 The employees were helpful, friendly, and not over-bearing as some companies can be.  One even offered to take our photo as a family as we were waiting for my cousin to arrive.  I’m always leery of handing my camera over to someone else, but of course I could trust an Isango employee not to run off. 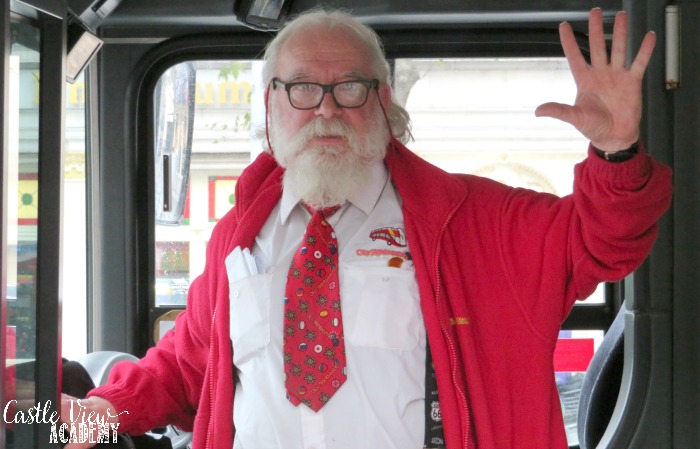 In the run up to Christmas, it was fun for the children to meet our first driver of the day who is very reminiscent of Santa!  He has a great sense of humour and was very knowledgeable about the city.  His banter with other tourists hopping on and off was broadcast over the speakers and was fun to listen to.  He gave some Australians a quiz about Australia (the Australians didn’t pass), and he was surprised to see someone ‘escape’ from Kilmainham Gaol (jail) and make it back to the bus before it moved onto its next stop.

As the bus pulled away from from the first stop we were greeted with the quote,

“There are no strangers here; only friends you haven’t yet met.”

A quote I didn’t know until now was attributed to WB Yeats (sad, I know).  When we took this tour, it was only 7 days short of 14 years since I was first welcomed to Northern Ireland with this phrase.  Time marches on and I certainly didn’t know then that I would still be here now.

We had decided that we would start with a tour of the blue line as it would be the first to finish for the day, and it would give us a good overview of the city so that we could plan our day from there.  This is what I would recommend to anyone who is short on time and wants to see ‘everything,’ or those with a 48-hour ticket with lots of time to explore.  If you have a particular destination in mind, work that in your plan. 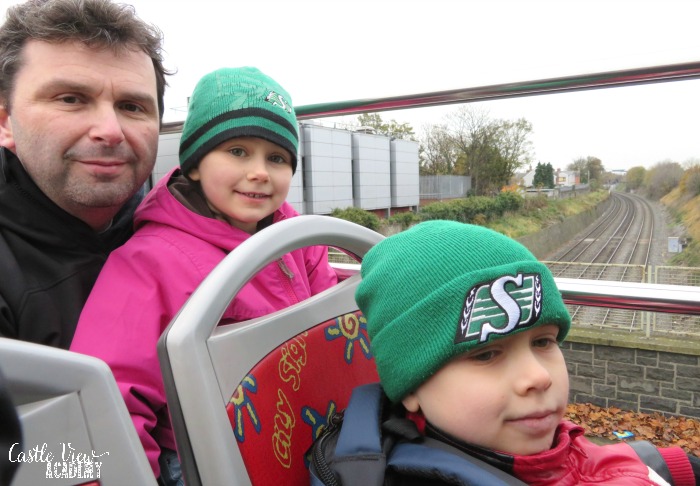 We sat up on the top deck in the open air as the children had been looking forward to the ‘whole experience’.   Luckily the forecast for a rain-filled day had eased and it was dry, but cool.  One reason to take a Dublin Tour is that you can sit in the open air on nice days, but on the bad-weather days you also have the option to sit further to the front under cover, or on the lower deck with some heating.

I had been to Dublin on a few occasions between 2000 and 2006; on my own and with friends, but I still saw areas that I had not been to before. 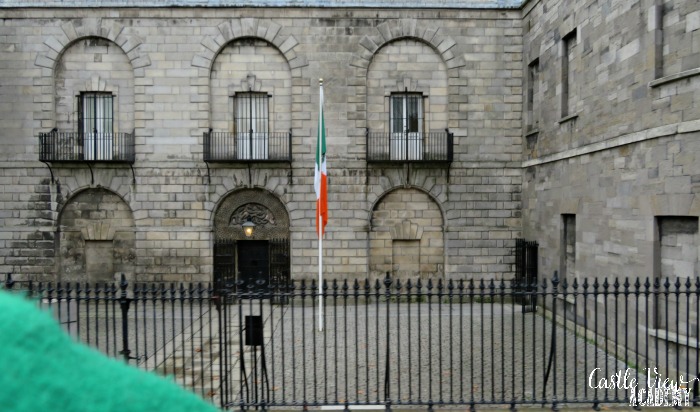 Because we were up high we saw a different view of the city; not just the back of other vehicles. One drawback is that it can be a little trickier to take photos from this particular angle.  Or it could only have been because I was sitting in the aisle and Tristan kept moving his head around looking at everything and I ended up with many photos with his head in the corner. 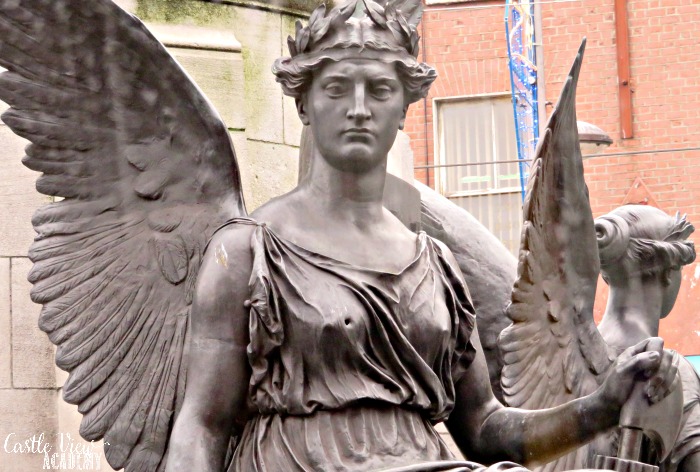 Because we were up top we could also see things up close; such as a bullet hole in an angel’s breast in the Daniel O’Connell monument on O’Connell Street that date back to the Easter Rising.  The statue was restored in 2005, but the 30 bullet holes were left as they were. At first I thought it was a defect in the statue and wasn’t going to take a photo and then our helpful ‘Santa’ explained what it was and the history behind it. 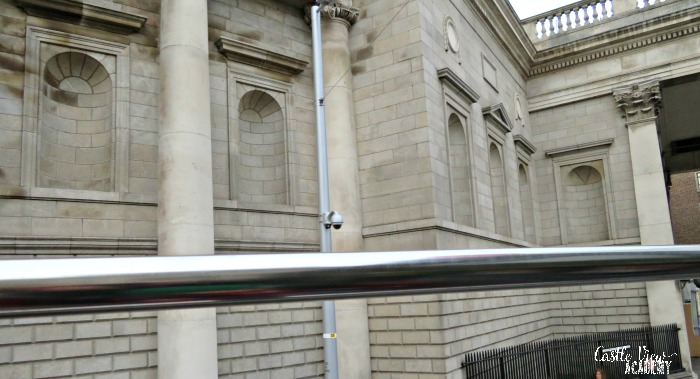 As we went round past Trinity College, the Bank of Ireland was on the left.  The majority of the windows had been bricked up during construction in the 1730s to avoid paying the ‘window tax.’  Our driver and guide had a great slogan,

“Bank with us and your money will never see the light of day!”

Of course, the blue line bus makes a stop at the famous Guinness Brewery and passes the iconic gate. 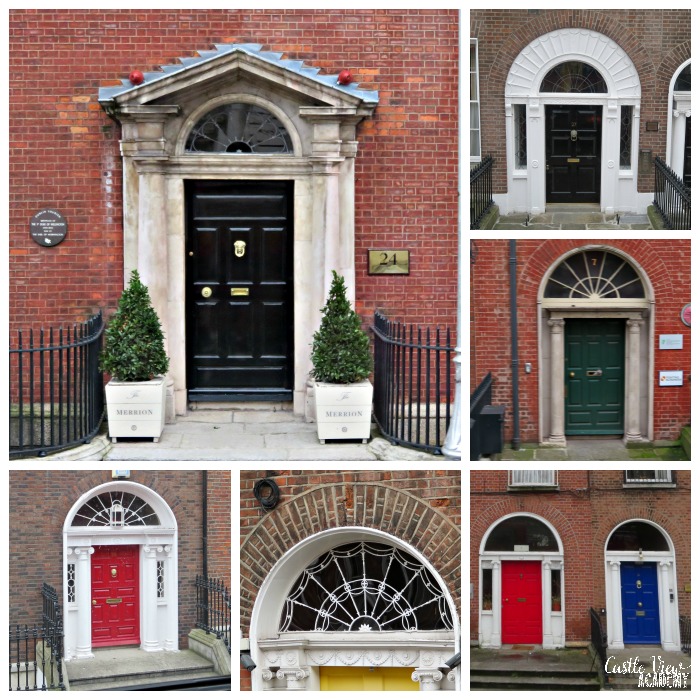 One of my favourite things about Dublin is the Georgian architecture.  It’s just so grand.  And the doors.  The doors are so famous that there are even postcards filled with doors.  The fanlights (windows) above the doors are great.  Originally they would each have been different and a building would be known by the design of its fanlight. 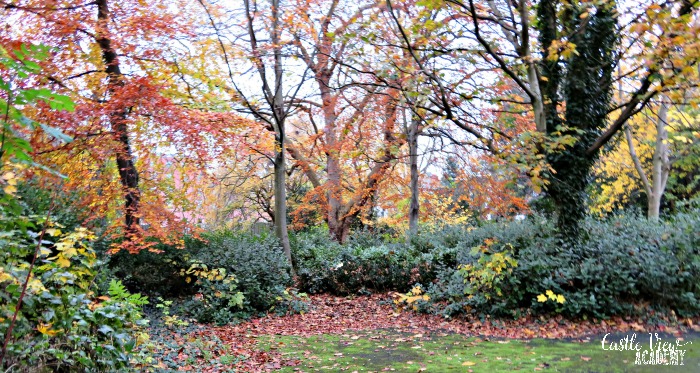 We stopped at the historic St. Stephen’s Green Park for our picnic lunch, surrounded by autumn colours.  A stop at this park is a must each time I visit the city. 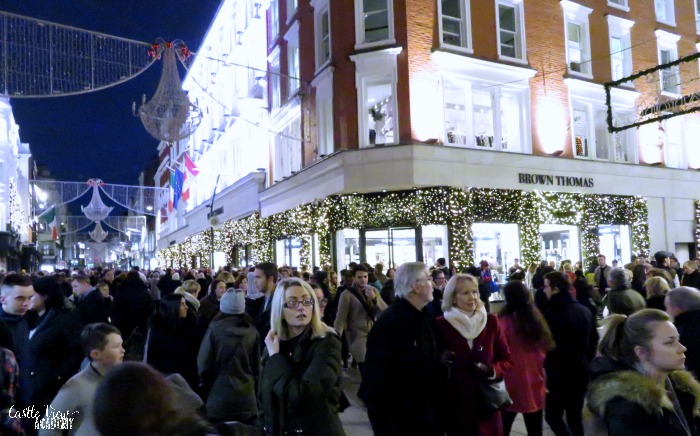 After lunch we headed over to the Archaeology and History Museum, which was just down the street.  We also had a wander down Grafton Street and back across the Liffey to O’Connell Street.  This happened to be the day of the Christmas Lights switch on and we decided to stay for that, too.  I will tell you more about that experience next week, but let me tell you that the Dublin Bus Tour was absolutely the highlight of our day.

Over the course of the day we walked walked over 14,000 steps but it didn’t feel like it because it was broken up between the bus tours and coffee shop pit stops to warm up. 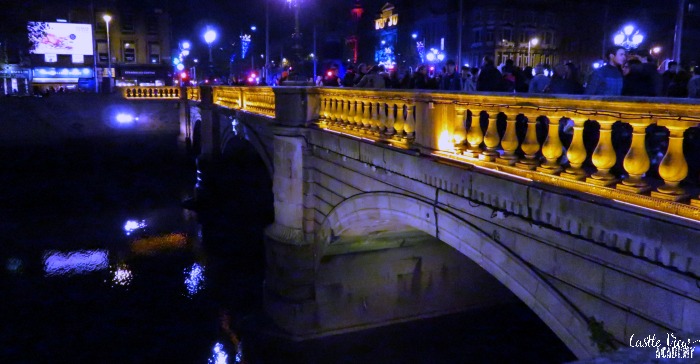 If you are going to visit Dublin I would highly recommend staying in the city for a night or two because taking the bus in from further afield as we did means that you will lose part of your day commuting. But, if you’re like us and you left the house at a ridiculous hour, you will have time to see quite a bit.  However, you won’t even have scratched the surface and making that trip back and forth daily isn’t practical.

We had the most wonderful day with family, and we’ve created some lasting memories.  Have you ever done a hop on hop off bus tour? Which location was it in? What was the best thing about it?  Please let us know in the comments below!

Previous Post: « Your Happy Child: 10 Proven Steps To Raising A Happy Child
Next Post: Which One’s Santa? Are You Puzzled? »