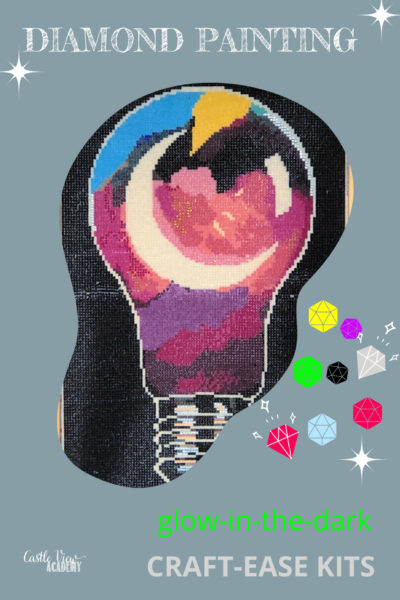 When we were contacted to see if we were interested in doing a diamond painting from Craft-Ease, we were keen to try it out as this was going to be a new experience for us. Let’s see how it went!

We received a kit in exchange for our honest opinion. Kallista chose Moonlight – Glow, a glow-in-the-dark light bulb to try for our first project. It did take a while for the kit to arrive – they said it would be about 5-6 weeks, but it was here in about a month.

What is Diamond Painting?

I first heard about diamond painting through a cousin in Canada who had talked about doing them on social media. Diamond painting is a bit like creating a mosaic. You pick up ‘diamonds’ and place them on a pre-glued picture. You follow the colour codes as you would on a paint-by-number.

There are 4 types of diamonds:

What Did We Need To Provide?

All I needed to purchase was a stretcher frame to complete the picture, as well as some tape to seal the diamond packets after they were opened. Everything else was included.

How Do You Do a Diamond Painting?

Originally I thought that this picture was going to take a stupendous amount of time to complete. However, it is quite addicting and I was going through a stressful period when this arrived. I was able to complete a lot more of it in a shorter period of time than I had expected.

Lay out your painting flat. If you’re right handed you start from the upper left corner. Peel back a little bit of the plastic to expose the glue and then follow the pattern like a paint by number.

See what colour, number, or letter each square is. Find the corresponding number on the side of the canvas and open that numbered packet of beads. Pour some beads into your tray.

Use one of the applicators to pick up the beads and place them into the squares on the canvas.

Before starting, just get a little of the adhesive gum into your applicator so that it holds the diamonds to transfer them from the tray to the canvas. You will need to replenish this gum from time to time. When we first started. We thought we are not going to have enough. But as it turns out, there’s way more than plenty enough to get through this and many other paintings before you will need additional gum.

One side of the applicator will pick up one diamond at a time. The other side will pick up 3 or 5 diamonds (there are 2 applicators). However, I found it was easier, and actually faster, to do them one at a time rather than trying to line the diamonds up just perfectly on the tray and then transfer them over into exactly the right place. But that could just be me. Maybe I need more experience or patience.

The best way to do a project like this is on a flat surface, such as a table. However, what I tended to do was sit on the sofa and I worked on this either during family movie night or when Phil and I were watching TV. To accommodate this, I used a board game box and folded the canvas around it. This worked really well for me. In the above picture, Kallista is using a TV tray table, which was also a great option.

The best way I found to work is one area at a time and one colour within the area at a time so you’re not spending too much time getting diamonds in and out of the little plastic packets. It takes less time to do that and there isn’t as big a risk of spilling the diamonds and mixing them up.

READ MORE:   Drawing Lessons For Kids by ArtAchieve; A Review

Once you get going you can find you can cover an area quite quickly. The technique I found that worked the best for us was to do about 20 in a row and then make a square. Then make a grid of diamonds with about six empty spaces within section. Then we’d go back and fill in those spaces.

I found that this helps create a more consistently lined grid and helps keep everything lined up nicely. Sometimes I would go ahead and make the grids and Kallista would come in just behind me filling them in. Or I could be working on one colour and she could be working on another.

What do we think about Diamond Painting?

I found diamond painting to be more fun than I had expected. It went much more swiftly than I anticipated, too. It’s a good way to relax and concentrate on what’s in front of you instead of what’s happening in the world around you. You can do it easily while listening to music or even having a TV show on the background.

The only thing I could suggest would be to have resealable packages for the beads or for the diamonds to allow them to be kept tidy not have to worry about any spilling out inadvertently.

The glow-in-the-dark diamonds add a different dimension to this particular painting, giving it a different view in light and in dark. In the dark, the outline of the lightbulb, as well as the moon and reflections gently glow.

Now that we have a frame (it still needs to be painted) for this diamond painting, Kallista has her eye on it and would like this to go in her room. I think it will give some character to her space, particularly with the glow-in-the-dark diamonds. It will show up as one picture during the day and then a slightly different version in the dark at night, which is quite a fun for a tween..