Home » Review » Degusta and Chill With The February Box 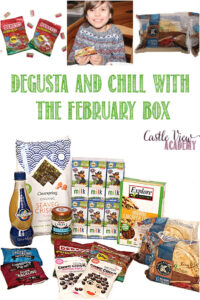 As I sit typing up our review of the February Degustabox and overcoming my procrastination since the January box, I’m looking forward to tonight’s date night with Phil, so we can Degusta and Chill with Netflix!  We’ll enjoy a nice gin Gina together after the kids have a dinner of pasta and pesto and head off to bed.  Saturday evenings are the one night of the week I don’t have to think about anything else.  Do you have such traditions?

Grab your February box while you can, and enter to win a hamper of Sacla pesto and antipasti, or one of 2 Degustaboxes! 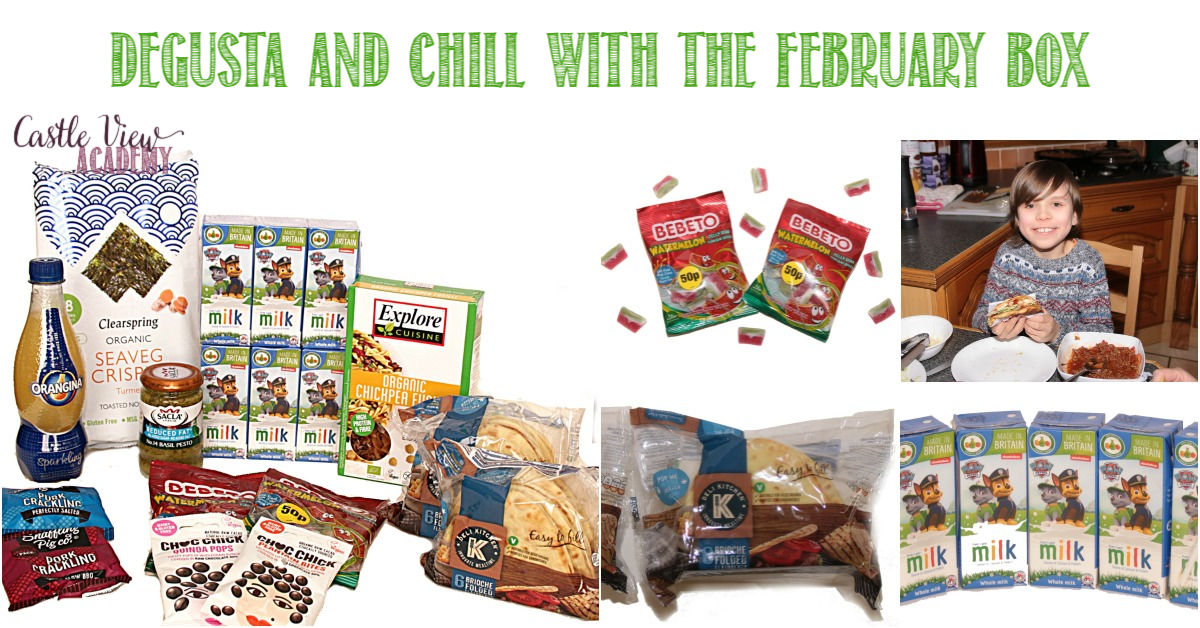 Last month the box design was changed and we neglected to share it with you…the box has the appearance of being smaller, but it’s just the same size, and still contains your favourite products…but with a brighter, more inviting appearance. 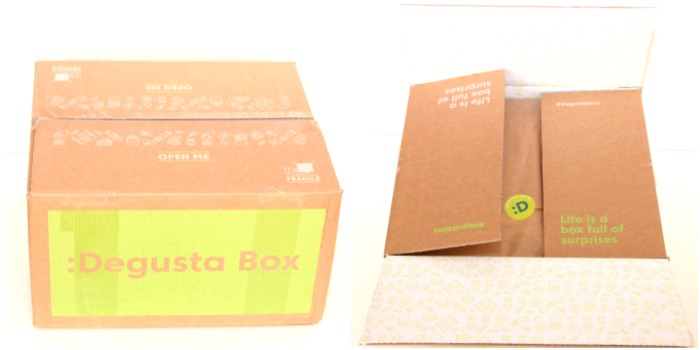 Let’s start with the contents of the February Degustabox before moving on to our top picks.  Each monthly box contains between 10-15 products; some aren’t yet available in the shops which gives you the first chance to try them out!  The short version of this month’s box is that there are 14 items; 7 snacks, 3 beverages, and 4 meal items.  The long version is…. 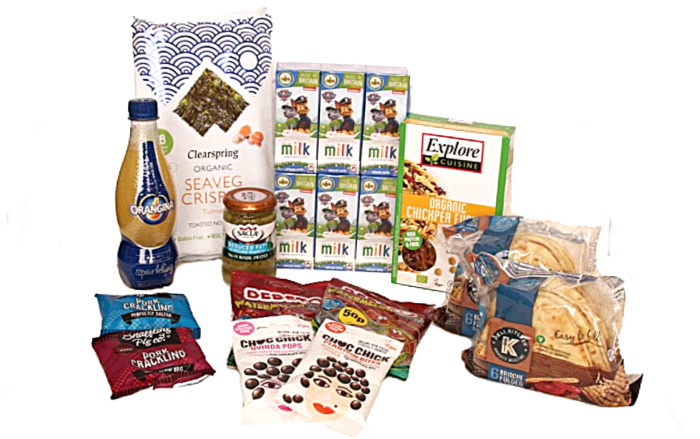 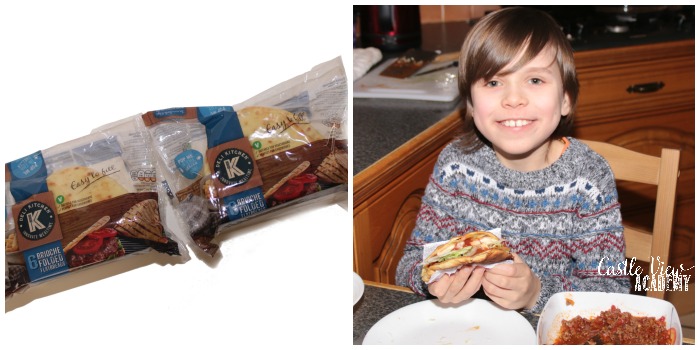 This month we received a fresh item, Deli Kitche Folded Brioche Flatbreads, which can easily be kept for later by putting them in the freezer.  On occasion we have a taco Tuesday meal, and this week we mixed things up by using flatbread instead of taco shells, and the family loved it!  Flatbread is more filling, and we were all able to fit a lot of extra veggies inside, too!  I’m not usually a fan of brioche, but these flatbreads were very yummy after being toasted up under the grill and stuffed with goodness.  They keep their shape, and unlike hard taco shells, they don’t break apart, which is so frustrating.  The kids would love their lunchtime salads in one of these, too.

Orangina Original has been in previous Degusta boxes, and it makes a very nice gin Gina to sip on after a hard day’s work outside (I can’t get over the fact I’m prepping a garden wall for painting…and it’s still only February)!  I never thought the combo of gin and fizzy orange was something I’d like, as either one on their own and no thanks, but this combination I quite like! 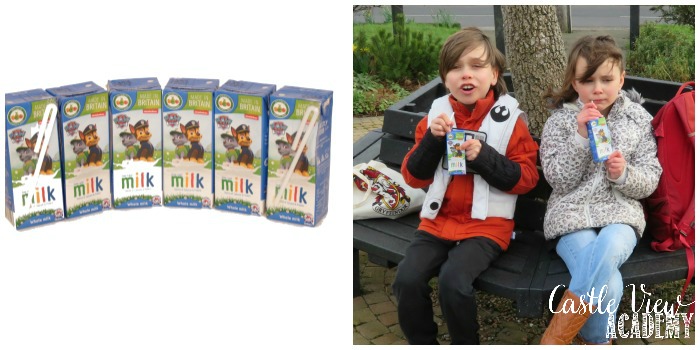 Appy Kids Co Whole Milk is a hit with the kids! Tristan’s much more tolerant of dairy products now, so he’s able to drink it, too.  We often go out for walks and to run errands, and sometimes we’re in a bit of a hurry to leave the house.  We can keep a couple of these small tetra boxes in the fridge and the kids can grab them as they go and have a quick sit-down along the way to watch for signs of spring while refreshing their palate. 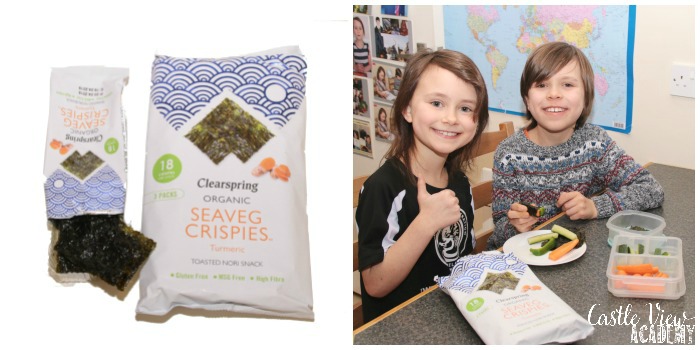 I may have some weird kids, but when they like healthy food, that’s okay with me!  Clearspring Organic Seaveg Crispies Turmeric Multi-pack are little pieces of nori (the seaweed sheets used for sushi), with the extra flavour of turmeric.  Ad they were just plain, the kids weren’t huge fans, but when they roll sliced veggies such as carrot, cucumber, and bell peppers within the nori sheets, they were a bit hit!  A fun way to spice up snack time veggies!

The children really liked Bebeto’s Watermelon Jelly Gums.  They tried one about 3 minutes after our delivery person dropped off our box and they were chilled from being in the back of the van.  I think the extra chill was actually a nice touch! I’m not a fan of watermelon, but I quite liked these, too.  They’re not overpoweringly sweet, nor are they too sour.

The Explore Cuisine Organic Chickpea Fusilli was a bit of a mixed opinion for my family.  Phil and Tristan liked it, but Kallista and I weren’t as keen.  The texture was different from wholewheat fusilli, and I didn’t find it terribly flavourful.  However, if you cannot tolerate gluten, then this would probably be a texture you’re used to and it may be a fit for you.

We do very much enjoy Sacla Pesto from time to time, however, we were disappointed in the Sacla Reduced Fat Basil Pesto.  It seems that half the flavour disappeared with the 25% less fat.  I was pleased to see the fat doesn’t seem to have been replaced by salt and artificial sugars, and the consistency was the same, but it just doesn’t have the usual kick of the full-fat pesto.

Choc Chick Quinoa Pops & Plantain Bites were once again a mixed opinion.  Tristan likes dark chocolate, and as he had a dairy allergy for a decade, the fact that they are dairy-free is a plus, but that aside, he liked the Quinoa Pops.  The Plantain Bites were softer than the quinoa, and a mix of sweet and bitter at the same time; these were a better fit for the family.

Back in my younger days in Canada, I did have pork rinds on occasion, but I’m not sure if I had tried them out during the 15 years I’ve been in the UK.  We received 2 flavours of Snaffling Pig Pork Crackling, Perfectly Salted and Low & Slow BBQ.  While the children were reading during their home education lesson one afternoon and I was having a cup of tea and listening, I thought it would be a good time to try them out.  Unfortunately, it seems that pork crackling isn’t the same on this side of the ocean, and I really was not a fan…and I couldn’t convince the rest of the family to try them out for a second opinion.

There you have it!  The full run-down of the Degusta and Chill February 2019 Degustabox – the ups and downs and in-betweens.  Have you tried a Degustabox yet?  Give it a whirl and see what delights are in the next box!